By Acosta’s account, the interrogation by at least eight military officials who took turns began 10:30 p.m. on the day of his arrest and ended only on 6:00 pm of February 15. In the intervening 44 hours, he was only allowed two hours of sleep and only because his interrogators themselves already got too tired and sleepy.

He was not holding a grenade or any explosive at the time of his arrest and he was subjected to torture while in the custody of the military.

These were some of the assertions made by poet and writer Ericson Acosta in the counter-affidavit he submitted to the National Prosecution Service in Calbayog City Samar April 12, 2011.

In the presence of the Assistant Provincial Prosecutor Agustin M. Avalon and his own lawyer Julian F. Oliva of the National Union of People’s Lawyers (NUPL), Acosta affirmed that he was a freelance journalist doing research on human rights violations and the protection of the environment in Samar for the Alliance of Concerned Samareños (ACOS) and the peasant group Kapununguan Han Gudti Nga Parag-Uma Ha Weste Han Samar (Kapawa.) He said that during his arrest and in the course of his continued detention, his constitutional and human rights were violated.

“I was arrested without warrant while not committing any crime or doing anything illegal; I was not informed of the reason for my arrest at the time of my arrest. I was also denied the right to counsel; denied a phone call and prevented from contacting my family or my lawyer and subjected to prolonged interrogation for 44 hours,” he said.

Acosta said that during tactical interrogation, he was physically and psychologically tortured; deprived of sleep, threatened, intimidated, coerced and forced to admit membership in the New People’s Army (NPA).

“The evidence against me, ‘the grenade’, was planted; the complaint against me was filed in court only after 72 hours and 30 minutes after my arrest; and I was detained in a military camp, which is not of civilian jurisdiction.

Acosta was arrested On February 13, 2011 in Barangay Bay?ang, San Jorge, Samar. In reports it released to the media, the Armed Forces of the Philippines (AFP) said that Acosta was a verified member of the NPA and that he attempted to resist arrest by trying to lob a grenade against arresting soldiers.

In his sworn statement, Acosta denied both allegations. 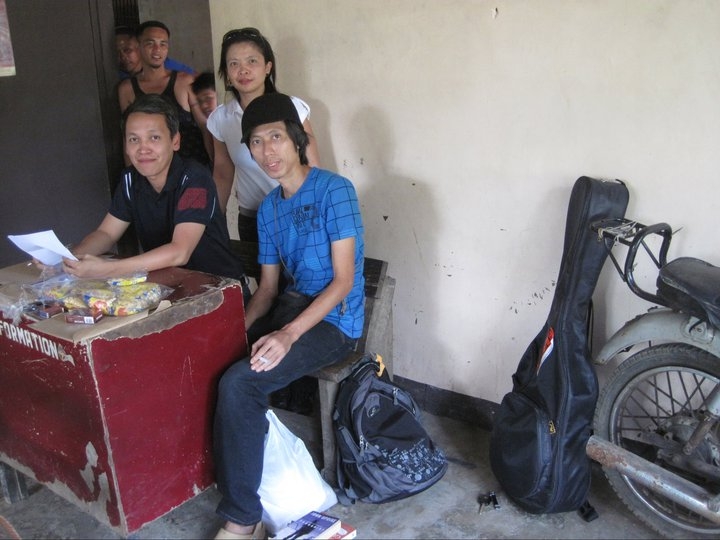 Ericson Acosta visited by friends from the University of the Philippines led by Bayan secretary-general Renato Reyes at the Calbayog jail, Samar.(Photo Courtesy by freeacosta.blogspot.com / bulatlat.com)

“I had just completed my research task the previous day. I left Barangay Bay?ang, San Jorge, Samar at a little past 9 o’ clock in the morning, and headed for what the barrio folk call their ‘port’ – an unmarked quay by the river which was less than an hour’s walk via mountain trail, where a pump boat was scheduled to pick me up at the said place and bring me to San Jorge town proper. I was joined by Vicente Dacles, the Barangay Secretary, and several other residents of Bay?ang who were all going to town as well for some business,” Acosta wrote in his affidavit.

Acosta said that Dacles was at the head of their group, followed closely by himself, while the rest, who were mostly women and children, fell behind by at least a hundred meters.

Around 10 a.m. and when they were some 200 meters away from their destination, they caught sight of a platoon of soldiers who motioned to them (Dacles and Acosta) to stop. Acosta said that he immediately noticed that the soldiers were resting and cooking by the left side of the trail.

“One of the soldiers approached and asked where we came from and where we were going. We answered them. The soldier then inquired if we knew where they could fetch water. Dacles turned around and pointed to an area somewhere, and gave the soldier brief directions on how to get there. He even added that if it became difficult to locate, the soldier could just ask the rest of our company who were lagging behind. The soldier then told us to carry on, and so we did,” he said.

Barely a minute had passed after Acosta and the rest of his companions began walking when another team of soldiers accosted them. Dacles answered their questions and told them that they had already been questioned by the first group of soldiers. When they turned to go, the soldier again ordered us to halt. He pointed to the mini?knapsack that Acosta carried and asked him what was in it.

“ Before I could even reply, the soldier, in brisk movements, had un?slung the knapsack from my shoulders and had zipped it open. It was my computer notebook and some other complementary gadgets he found inside my mini?knapsack,” Acosta said.

The soldier was reportedly quite surprised by what he saw. “You’re in the mountains but you have a laptop?” the soldier said.

The soldier and his team then led Acosta and his companions back to where the main body of the platoon was. There the soldiers took turns body-searching Acosta. They emptied his pockets and his sling pouch; they checked his sides and lifted the hem of his shirt up to his neck looking for concealed weapons. They did not find any.

Then one of the soldiers handed Acosta his computer and told him to turn it on.

“I told them that the batteries had already drained out. I pressed the power button to show them that the computer won’t boot. But another soldier scolded me for pressing the button saying that I might have consciously and slyly triggered the computer to self?destruct. Then the soldiers, five to seven of them at a time, started to harangue me almost in unison, with raised voices and intermittent invectives and threats.”

According to Acosta, they accused him of being an NPA and that he was probably a ranking official and that’s why he had a laptop. They yelled at him and ordered him to be careful with his movements or he would be sorry and threatened him with physical harm.

“I tried to explain to them that I was doing research in the area but whatever I said was drowned it seemed by their intense excitement to badger and harass me. This went on for several minutes until our other companions from Bay?ang finally arrived at the scene,” he went on.

A soldier asked the women in the group if they knew me. The women said yes and that they were supposed to go to town with me. Another soldier butted in and shouted and berated the group, “You’re all liars!,” said the soldier, “This man is an NPA!”

An officer finally intervened. He introduced himself as the commanding officer of the platoon. He told Acosta’s companions that they were all free to go to where they were supposed to go, and the soldiers will only take with them the Tagalog (Acosta).