Acosta attended this afternoon’s hearing at the Regional Trial Court Branch 41 in Gandara, Samar. Along the way, jail officers guarded him and another prisoner inside the vehicle of the Bureau of Jail Management and Penology (BJMP). A police mobile and a six-by-six Army truck tailed them.

When asked why the soldiers had to come along, the junior officer who was coordinating with the policemen and the jail authorities just grinned. “I’m not allowed … [to say anything],” he told Bulatlat.com.

The prosecutor recently filed a motion to transfer custody of Acosta from the Calbayog Sub-Provincial jail in Carayman, Calbayog City to Samar Provincial Jail in Catbalogan City. “If granted, that would be the completion of the [military’s] invasion. And the casualty would be civilian authority,” Acosta said in an interview, adding that the detention facility in Catbalogan is located near the headquarters of the Philippine Army’s 8th Infantry Division. 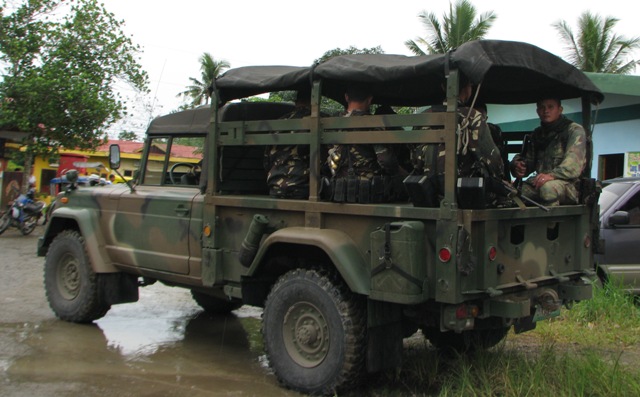 “That said accused is suspected to be a member of the communist executive committee in Samar province and as such, the jail authorities of Calbayog Sub-Provincial Jail are apprehensive of a communist armed raid of said jail taking into consideration the recent incidents in some places in Samar and in other provinces in the country where the communist rebels attacked and raided some detention cells purposely to rescue detainees tagged as members of their organization,” public prosecutor Agustin Avalon said in his motion.

Acosta said there were instances that the soldiers would go inside the premises of the provincial jail, listen to his conversations with visitors and look into the names of his visitors. “The civilian authorities must assert their power over these military invaders,” he said.

During the hearing, lawyer Valentino Acuba who appeared for Acosta, said the counsels have not received an official copy of the motion filed by the prosecutor. Presiding Judge Feliciano Aguilar ordered Avalon to furnish Acosta’s camp a copy of the motion. Aguilar then granted 15 days for the defense to file a comment.

In a text message, lawyer Julian Oliva Jr., one of the counsels, said their initial consensus is to oppose the motion. “The court is in Calbayog and the nearest civilian detention facility is the [Calbayog] sub-provincial jail,” he said, adding that Catbalogan is more than an hour-drive from Calbayog.

“The prosecution merely wanted to free the soldiers deployed around the jail,” Oliva said. He branded as “imagined” the justification being used by the prosecution that Acosta would be rescued by the NPA.

Acosta said that from the beginning, even before the series of tactical offensives of the New People’s Army (NPA) in different places, the military wanted to maintain custody of him. “The first time I was brought to the court, officers of the 8th ID offered special custodial arrangements for me,” he said.

“With the deployment of troops, the jail has become a legitimate target of attack by the NPA. Deploying forces in a supposedly civilian facility puts the jail in a dangerous situation,” Acosta said.

The Free Acosta Campaign (FEAC), a network of Acosta’s supporters, demanded the pull out of the military deployment at the sub-provincial jail.

Arrested on February 13 in Bgy. Bay-ang, San Jorge, Samar, Acosta was charged with illegal possession of explosives. The 34th Infantry Battalion filed the complaint.
Ma. Josephine Dy of Karapatan-Western Samar said: “The military filed the complaint against Ericson and they insist on guarding him closely. Is that due process?”

A petition for review was filed by Acosta’s counsels from the National Union of Peoples’ Lawyers (NUPL) before the Department of Justice (DOJ) in September. Said petition is pending resolution.

The FEAC reiterated its appeal to the DOJ to withdraw the charges filed against Acosta and to order his immediate release from detention.

“Our hopes are high that the DOJ will act on the case of Ericson,” playwright Malou Jacob, executive director of the National Commission for the Culture and the Arts (NCAA), said in a statement.