Overseas Filipino workers (OFWs) led by Migrante International and its chapters in at least 20 countries will launch coordinated protests and other forms of action on December 18, which they have dubbed as “Zero Remittance Day.” Overseas Filipinos from Australia, HK, Japan, South Korea, Macau, New Zealand, Taiwan, Kingdom of Saudi Arabia, Qatar, Libya, UAE, Austria, Belgium, Denmark, Italy, Netherlands, Switzerland, the United Kingdom, Canada and the United States will not send remittances for the entire day.

According to Migrante International chairman Garry Martinez, the protest is meant to concretize OFWs’ disgust and anger against the callous neglect of OFWs and their welfare by the administration of Benigno Aquino III. 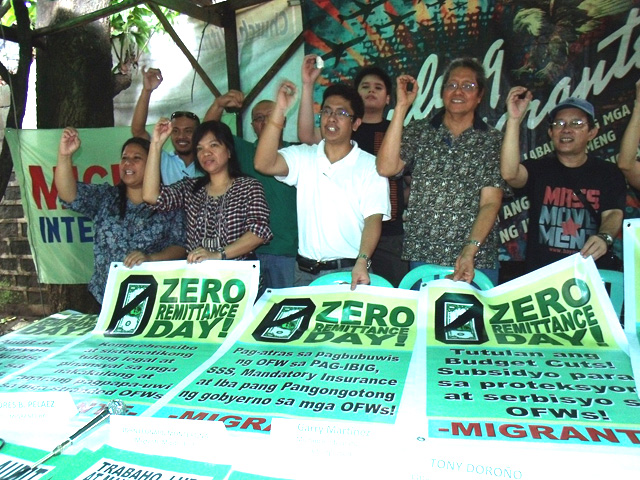 “While President Aquino acted with surprising and remarkable dispatch to have ex-president Gloria Macapagal-Arroyo arrested and Chief Justice Renato Corona impeached, he has not acted with the same swiftness and resolve when it came to addressing the needs of hundreds of thousands of OFWs all over the world, many of whom are facing jail sentences and even the death penalty. Many more continue to be exploited, raped and abused by criminal employers and thousands others are caught in the tide of worsening armed conflict and economic crises in the countries where they are deployed, ” he said.

The labor leader pointed out that a year and a half after Aquino assumed office, the burdens of OFWs remain heavy and grow heavier as days pass.

“Instead of focusing on creating local employment and improving the wages, benefits and employment conditions of workers and employees, the Aquino government continues to push its labor export policy to the hilt. While OFWs may laud him for putting Arroyo behind bars or impeaching Corona, it cannot be ignored that Aquino’s labor export program takes off where his predecesor’s left off. Nothing short of the reversal of Aquino’s present economic policies – including the labor export policy – can make OFWs believe that Aquino is cut from a different cookie cutter than Arroyo. What we’re actually seeing are two political factions clashing, and it’s evident that Aquino is lashing out with vindictiveness than he is motivated by the slightest sense of justice,” he said.

Martinez said OFWs will not be sending money home to the Philippines on December 18 to show the Aquino government that they are serious in our demands.

“If he can act with the same haste and zealousness that he did on the cases of Arroyo and Corona, then by no means is he unable to heed the demands of OFWs,” he said.

This is not the first time that Migrante International led calls for a Zero Remittance Day. Despite criticisms of “economic sabotage,” Migrante argued that for quite too long government and big business have maximized the use of OFW remittances for their own self-serving interest and financial gain.

” The power to send, or not to send their remittances, rests on OFWs alone. This is our way of making ourselves heard. This government will sit up and listen when it comes to money matters: after all, it has already proven that money is more important to it than the welfare of OFWs. How? For instance, it would rather allow the rape and exploitation of OFWs in countries in the Middle East than raise a howl because it worries that Filipinos will no longer be allowed to work there, ” he said.

Aside from pointing out the government’s failure to uphold the welfare of OFWs, Migrante International continues to issue a list of demands which they say any government with the best interest of its people in mind would immediately agree to.
All over the world, Martinez explained, OFWs and their families are calling for increases in the government’s subsidies for OFW services as should be delivered by the departments of foreign affairs, labor and other concerned agencies.

“We also demand a full audit and investigation of the funds of the Overseas Workers Welfare Administration (OWWA) and the scrapping of the OWWA Omnibus Policies. We also want the government to stop forcing us to pay mandatory membership fees to the Pag-Ibig, and the Social Security System or to pay various insurance fees and taxes. We would gladly shoulder more taxes if we actually saw how these taxes are being used to benefit OFWs, but as things stand, government services for OFWs are so dismal as to be non-existent. There’s barely available or accessible legal assistance for OFWs on death row and in jail. When they need it, OFWs stranded abroad because of armed conflict or calamities do not receive immediate and sufficient assistance,” he said.

December 18 will also see Migrante International hold its sixth congress. The theme for the sixth congress which will be held at the Claret Retreat House in Tandang Sora is “Palawakin at Patatagin ang ating hanay! Labanan ang atake sa kabuhayan at karapatan ng migranteng Pilipino at ng Sambayanang Pilipino!” (Broaden and Strengthen our ranks! Fight against the attacks on the livelihood and rights of migrant Filipinos and the Filipino people!).

On December 4, 2000, the United Nations General Assembly declared December 18 as International Migrants Day, while a decade before, also on December 18, the GA adopted the International Convention on the Protection of the Rights of All Migrant Workers and Members of Their Families.

MIgrante International chose the same date to hold its congress which, it explained, will be be a time for the leaders and members of Migrante’s chapters all over the world to look back and reflect upon the challenges the organization has met and overcome. The congress, which will be from December 14 to 16, will also witness the election of Migrante International’s regional representatives to the Global Council as well as the election of executive committee officers.

Prof. Jose Ma. Sison, chairman of the International League of People’s struggles (ILPS), Eni Lestari, chairman of the International Migrants Alliance, and Senator Manuel Villar were among the first to send solidarity messages.
Sison addressed his missive to Migrante’s around 90 member-organizations and its staff in the Philippines who are, he said, “A committed and competent volunteer network of former OFWs, their families and advocates from various walks of life.”

“It is necessary for Migrante International not only to look after the rights and interests of migrant workers abroad and the families they leave behind in the Philippines, but also to demand the assertion of national independence, empowerment of the working people and economic development through land reform and nationalist industrialization. This must be so that Filipinos will one day no longer have to leave their families and the country at great psychological cost and face the rigors, difficulties and uncertainties abroad,” he said.

Lestari said that Migrante International should be hailed for its 15 years of services for migrants and its part in campaigning for genuine social change.

“We admire the work you have done in building and strengthening the movement of Filipino migrants in many countries around the world. Your work continues to inspire migrant workers of different nationalities to do painstaking organizing, actively campaign on issues, deliver concrete services to migrants in distress, launch massive and comprehensive education, build solidarity relations, and integrate the migrants’ movement with the people’s movement in our respective countries of origin.

Villar acknowledged the group as his partner in one of his main advocacies, namely helping OFWs.
“As an alliance of progressive organizations of OFWs, I commend Migrante International for untiringly and vigilantly upholding and advancing the rights of OFWs. Even when OFWs themselves are giving up, Migrante carries on the fight for them,” he said. He also thanked the group for its continued support to his legislative advocacies including the Sagip-OFW helpline and the Villar Foundation.

On December 17, Migrante Sectoral Partylist will also hold its convention and in the evening, the first Gawad Migrante Ceremonies will be conducted.

The Gawad Migrante Awards aim to give tribute to OFWs who have made a difference in the lives of other OFWs and their struggle for better conditions, as well as having made significant contributions to furthering the Filipino people’s democratic aspirations.