You Are Here: Home → 2011 → December → 18 → Connie Bragas-Regalado: A migrants rights advocate, an activist, a mother

Connie Bragas-Regalado: A migrants rights advocate, an activist, a mother

Being a social worker, an activist, a mother forced by circumstance to work as a domestic helper overseas, and an organizer shaped Connie Bragas-Regalado into being an effective advocate and leader for migrants’ rights.

MANILA — Connie Bragas-Regalado, one of the leaders of migrant rights group Migrante International, looks stern, serious and strict. She resembles a professor, whose mere presence could command respect, even fear.

“Really?” she exclaimed in protest when told that many are intimidated by her for being seemingly too serious at work. Connie laughs and adds that, “I am just very keen with details. And I guess people mistake it for being stern.”

Connie is one of the most prominent faces of the migrants rights struggle in the Philippines and abroad, as well. Though petite, she speaks courageously during protest actions, press briefings and in various programs organized by Migrante International.

Connie did not expect that she would able to enter college, given her family’s meager income. But an opportunity of a lifetime came and she grabbed it instantly.

When Connie was still in high school, a group of missionaries came to their place and gave a self-awareness forum. She was very active in their activities and was eventually offered a scholarship.

She went around Cebu looking for a good but an inexpensive university, adding that she did not want to study in an expensive school, in consideration for the missionaries who wanted to help her. Connie found the University of Southern Philippines – Cebu. “I wanted to take up medicine but my brain might not be able to take it,” Connie said.

“I wondered what a social worker does,” she said. She signed up for the course nonetheless.

It was 1971 and the Philippines was under former president Ferdinand Marcos. Activism was at its height in the University of Southern Philippines and its neighboring school Cebu Institute of Technology. She attended rallies and teach ins to better understand what was happening at that time. Connie became an activist.

When martial law was declared, Connie lost contact with the organizer in their school. She then focused on her education and eventually finished her degree. She then worked as a social worker for the Department of Social Welfare and Development. Good thing, Connie added, that she was assigned to serve the people along with progressive priests.

At that time, Connie’s background as an activist kicked in. She started to question government projects and its implementation. On top of that, Connie also discovered some irregularities in the project, such as the cement-like skim milk provided to the children’s feeding program, expired medicines sold to the people, among others.

This made her earn the label of “Rebeldeng Cebuana,” which literally meant a rebel from Cebu.

In 1977, Connie married Clemente Regalado, a fellow government employee from the National Food Authority. With their meager salary as a couple, the two decided that if they wanted to bring a brighter future for their children, one of them must work abroad. Connie volunteered to go. Connie, in 1983, finally agreed to work abroad in Hongkong as a domestic helper.

Connie worked for an American couple for two years. She considered herself lucky that she was not maltreated in any way by her employer unlike other Filipino women who worked nearby. At times, she would bring food to her fellow domestic helpers who were being starved by their employers. 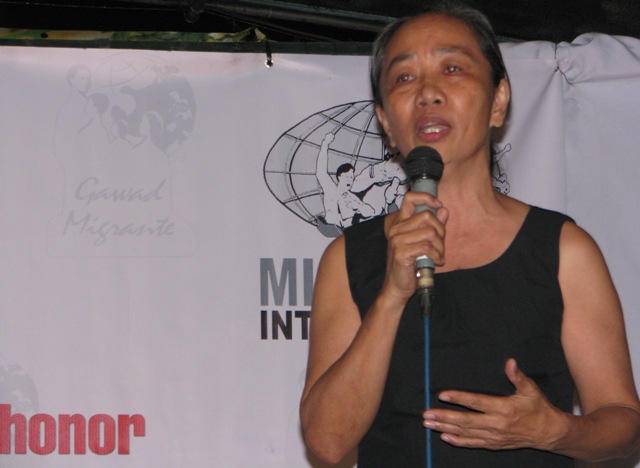 When she returned to the Philippines in 1985, Connie was invited by the Women Interservices Center to help them organize peasant women of Dole, a multinational company. “Here, I had an opportunity to get a deeper understanding of the peasant struggle, especially how they are being exploited.”

“From the planting to harvesting season, they survive on loans. So after they sell their produce, peasants hardly have money left for their family,” Connie adds, “But they remain very positive in their outlook in life. I saw how determined they are to change the system.”

In the Dole plantation, Connie said, organizers used to have access inside the canning factory. There, she said, workers were not allowed to sit down while they are on duty. On top of that, the factory also smelled bad and has very poor ventilation. In the field, workers were not given a shade to rest. “They have no protection at all from the heat and the harmful chemicals that they are using in the plantation. All they have are several layers of clothes to wear for their protection”

“Those days were hard, especially when the management started to suspect that the workers were being organized,” she said.

At the height of the union-busting activities of the Dole management, a grenade was thrown in one of the homes of their member. Connie saw the grenade land inside their home and she shouted for everyone to run for their lives. Then, someone opened fired at the home. A child was wounded in the attack. “We suspected that the members of the paramilitary unit called CAFGUs were behind it,” she added.

Connie said that, in another instance, a community of 70 households were burned down by soldiers. “I was really afraid at that time. But when I saw how determined the people were, my morale soared again.”

In 1991, the hard life forced Connie to work abroad as a domestic helper for the second time around. Now armed with her experience in organizing peasants, she wanted to be of help to her fellow Filipino women who were suffering in the hands of their employers, a condition she witnessed when she first worked in Hongkong. Connie made an initial research to know some Filipino migrants’ group she can join before leaving Manila.

Connie worked for a Hongkong national couple, Paul and Margaret Chan and their two children. Again, she feels grateful that unlike other Filipinos, Connie managed to get an employer who was good. Her salary, HK$3,200 was raised every six months.
“They trusted me with everything. Their money could be found everywhere in the house. At times, they would ask me to withdraw their money from the bank,” she said. Aside from her daily household work load, she also tutored her employer’s two children and even edited her employer’s papers when he was taking a doctorate degree.

Among their neighbors, Connie witnessed the plight of her fellow Filipino women working as domestic helpers. She said some would still flatten their clothes at 3:00 a.m. and were not even eaten a single meal. There were also other domestic helpers who were not allowed to pee because “it is noisy.”

Connie, during her first day off in Hongkong on March 7, 1991, went to the Church of All Nations, a protestant church. She joined Filipino Prayer and Care Group, a church fellowship program. This was where Connie later on had an opportunity to meet Jun Delles of the Mission for Filipino Migrant Workers – UNIFIL, who gave a paralegal training to their group.

Since then, she became very active in activities organized by Unifil, where she eventually became a member of their education committee.

As a member of Unifil, she learned more about what other Filipino women were going through. Their organization accommodated overseas Filipino workers who were either raped or accused of stealing from their employers. Those who were raped and impregnated were also taken cared of in their shelter.

Connie took care of six children of Filipino women who were victims of rape, where three of them were sent back to the Philippines and the other three were adopted.