You Are Here: Home → 2011 → December → 21 → Mothers of the disappeared call for people’s manhunt vs Palparan

Mothers of the disappeared call for people’s manhunt vs Palparan

“We call on the Filipino people to help us prosecute Palparan for the crimes he did to our children and to other victims of enforced disappearances.” – Mrs. Concepcion Empeño, mother of missing UP student Karen.

MANILA – The mothers of the two missing University of the Philippines (UP) students called on the public to participate in the people’s manhunt against retired Gen. Jovito Palparan Jr.

Palparan, then commander of the 7th Infantry Division of the Philippine Army, was implicated in the abduction of Karen Empeño and Sherlyn Cadapan on June 26, 2006 in Hagonoy, Bulacan. On Monday, the Bulacan Regional Trial Court Branch 14 issued a warrant of arrest against Palparan and three other military men. This came days after the Department of Justice (DOJ) issued a resolution finding probable cause in charges of kidnapping filed by the mothers of the victims.

Palparan and one of his men, Master Sergeant Rizal Hilario, remain at large. Two of the accused, Col. Felipe Anotado and Staff Sergeant Edgar Osorio have surrendered to the authorities.

“We call on the Filipino people to help us prosecute Palparan for the crimes he did to our children and to other victims of enforced disappearances,” Mrs. Concepcion Empeño, mother of Karen, said in a press conference this morning. 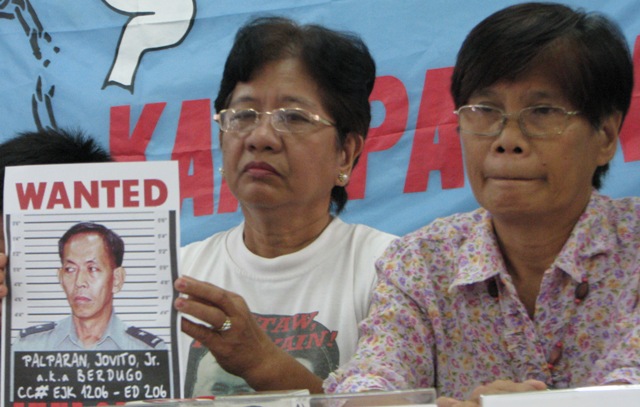 Mrs. Concepcion Empeño (left) and Mrs. Erlinda Cadapan, mothers of the missing UP students, call on the public to help them bring Gen. Jovito Palparan to justice.(Photo by Ronalyn V. Olea / bulatlat.com)

Mrs. Erlinda Cadapan, mother of Sherlyn, issued the same appeal. “To all our compatriots, to all citizens, we now know who the human rights violators are. We ask your help, if civilian arrest is not possible, please report to the authorities the whereabouts of Palparan,” Mrs. Cadapan said.

Four days after the DOJ resolution, Palparan tried leaving the country for Singapore but was prevented by immigration officials.

Also speaking at the press conference, Mrs. Edita Burgos, mother of another missing activist Jonas Burgos and chairwoman of Desaparecidos, hailed the person who called the attention of immigration officials to prevent Palparan from leaving.

“This is a good example of how we could win, if only we help one another. Let us get involved. Let us help. We have to do what is right…,” Mrs. Burgos, also convener of End Impunity Alliance, said. “If we do nothing, we side with evil. We will sin by omission. We cannot do this alone. We need more help and prayers.”

Mrs. Burgos said if only those who witnessed the abduction of his son on April 28, 2007 interfered, Jonas would not have been disappeared. “Now is your chance to help. If you see this face, or if you have any information about this person, please call 4342837 or text me at 09177476131 and tell us where we can find Palparan,” Mrs. Burgos said. 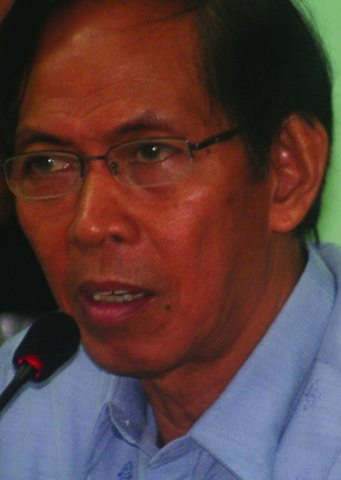 Palparan was not found in his last known address on Dado Street, Wild Cat Village in Ususan village, Taguig City.

Roneo Clamor, deputy secretary general of the human rights group Karapatan, said the government should use all its resources to locate, arrest and imprison Palparan.

Key witnesses to the Cadapan- Empeño case, Raymond Manalo and Oscar Leuterio, also called on the public to help them find Palparan.

Manalo, who was held captive by the military for 18 months and who suffered different forms of torture, said Palparan should be made accountable for all his crimes.

“Jovito Palparan, you are a coward. Mr. Empeno says you have no balls. We will not stop pursuing you, no matter where you go. Surface our daughters and the other victims of enforced disappearances. You will rot in jail, along with GMA, Abalos,” Mrs. Empeño said. GMA is the initials of former president Gloria Macapagal-Arroyo, now under hospital arrest for charges of electoral sabotage. Abalos is the former Commission on Elections chairman who is also charged with the same offense.

In a report by the Inquirer, Palparan reportedly said that the judge who had issued the arrest warrant should “think again.”

Palparan also criticized Justice Secretary Leila De Lima, saying the Supreme Court already prevented her from issuing watch-list orders. He also said the DOJ had filed an illegal case of kidnapping at the Bulacan court. He argued that he could not be charged with kidnapping because he was not a private person but an Army commander when Cadapan and Empeño went missing.

In reaction, Edre Olalia, one of the private prosecutors in the Cadapan- Empeño case said: “Palparan is hopelessly incorrigible and his braggadocio is incomparable. The highest military officer every criminally indicted for human rights violations is now spewing veiled threats against the judge [who issued the warrant] and venom against the Justice Secretary.”

“He has done that to anyone that stands in his way. He must give himself up now and stop being a coward and heartless creature that he really is,” Olalia, secretary general of the National Union of Peoples’ Lawyers (NUPL) said.

Mrs. Cadapan said her heart remains heavy even with the issuance of the warrant of arrest against Palparan. She said their search for justice has gone on for five years and a half. “Justice is still partly served so long as our daughters are not surfaced.”

Mrs. Burgos said that if Palparan would be arrested, he should be compelled to tell the whereabouts of and surface Sherlyn and Karen.

“He does not want to be imprisoned in an ordinary detention cell. What about our children? Where have they been detained? Again, we call on the public to join us in our manhunt. Look for Jovito Palparan and bring him to justice,” Mrs. Burgos said.

The two mothers still wait for the homecoming of their daughters.

“Every hour, every minute, every day of our lives, we wait for Sherlyn to come back,” Mrs. Cadapan said. She confessed she has kept on sending messages to the last known cell phone number of her daughter, even as she did not receive any reply for so long.

“I know Karen will return. We will see each other and our family would be happy again,” Mrs. Empeño said.