MANILA – One year after the killing of broadcaster and environmentalist Dr. Gerry Ortega, his family and colleagues reiterated their call for justice.

Ortega was killed on January 24 last year in Puerto Princesa, Palawan. Four alleged gunmen and their accomplices have been charged for the murder but the suspected masterminds were not named respondents to the case.

Members of Hustisya, an organization of relatives of victims of extrajudicial killings, Kalikasan party list and College Editors Guild of the Philippines (CEGP) trooped to the Department of Justice (DOJ), January 24, calling for a speedy resolution of Ortega’s murder.

“Justice is too slow. Amid overwhelming evidence, a year after, a case has yet to be filed against the mastermind in Daddy’s killing),” Micaella Ortega, eldest daughter of Ortega, said in a statement.

In a report by Interaksyon, Micaella said they have submitted to the second DOJ panel of prosecutors a record of phone message exchanges between Palawan ex-governor Joel Reyes and his former security aide, Rodolfo “Bumar” Edrad Jr., one of the suspects.

“What does make Ortega’s case stand out is that quick action by authorities following his murder established what appear to be clear links between those who carried out the hit and those who ordered it. This left everyone hopeful that, unlike all the other media killings, the resolution of the Ortega murder would actually see the first quick apprehension, prosecution and conviction of a mastermind. But a Department of Justice prosecution panel originally cleared the alleged mastermind and others accused of helping plan the murder of Ortega, recommending charges only against the hit team in an incongruous decision that sparked outrage,” the National Union of Journalists of the Philippines (NUJP) said in a statement.

While the DOJ granted the petition of Ortega’s family for reinvestigation and formed a new panel, the NUJP said, “there seems no indication that new findings are forthcoming.” 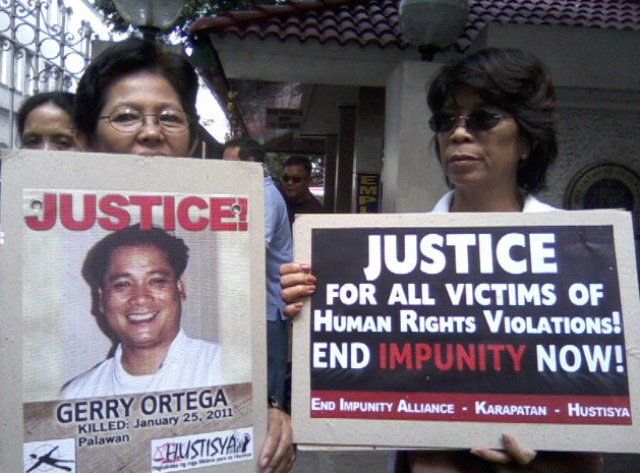 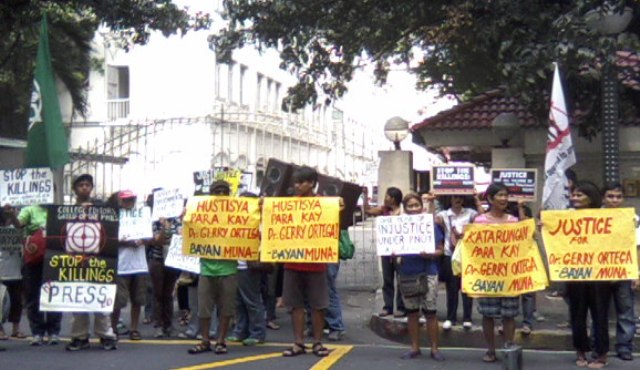 Supporters hold a picket rally in front of the Department of Justice on the first death anniversary of journalist and environmentalist Dr. Gerry Ortega.(Photos by Ronalyn V. Olea / bulatlat.com)

In the same vein, Cristina Guevarra, secretary general of Hustisya said, “Not all cases have the same strong evidence against the mastermind and Ortega’s killers. We have hoped that the evidence presented in Ortega’s killing may speed up the resolution of the case. However, the snail-paced progress of the prosecution further perpetuates impunity because the perpetrators remain on the loose.”

The NUJP said justice has remained elusive for Ortega and all the 150 Filipino journalists murdered since 1986. The group said that of the ten cases that have actually led to convictions, only the gunmen have been punished and no mastermind has ever been taken to account.

The NUJP urged the DOJ to hasten the reinvestigation and ensure a credible finding.

“We challenge Secretary De Lima to grab this opportunity to strike a clear and unequivocal blow against the culture of impunity that has emboldened those who would violate our people’s basic rights to do so and let loose a river of blood that has stained our land for the past many years,” Nestor Burgos Jr., NUJP chairman, said.

In a separate statement, Kalikasan People’s Network for the Environment (Kalikasan PNE) called on the Aquino administration to “exert an effort equal to their prosecution of Supreme Court Chief Justice Renato Corona in bringing to justice the perpetrators of killings and other human rights violations on environmental advocates such as Dr. Gerry Ortega.”

Corona, allied with former President Gloria Macapagal-Arroyo, was impeached by the House of Representatives in December. The trial is ongoing at the Philippine Senate.

“It is the height of hypocrisy when President Aquino is pushing for the conviction of Corona when Aquino’s court, particularly the DOJ, has presently failed to stop the spate of killings of environmentalists under his term. Not one among the perpetrators of these killings has been put to justice,” Clemente Bautista, national coordinator of Kalikasan PNE, said.

According to the group, ten environmental advocates have been killed under the new administration.

Meanwhile, Leon Dulce, spokesman of Kalikasan partylist said, “Injustices against the people and environment continue to occur on a daily basis because of environmentally-destructive, anti-people laws.”

“Pres. Aquino continues to promote mining liberalization and other anti-environment industries by defending it with state-sponsored militarization. How many more Gerry Ortegas do we need before the systematic human rights violations stop?” Dulce said.