“The TRB decision approving the automatic increase in toll fee rates every two years should be scrapped.” – Taxpayers Unity vs Toll Fee Hike

MANILA – While most Filipinos today are gritting their teeth over the left and right hike in fees and prices that greeted them this new year, private toll operators of the capital’s highways “are feasting on higher profits,” as a group of consumers focusing on operations of the privatized toll roads said recently.

“This is outrageous,” said the Tutol-Hike or Taxpayers Unity vs Toll Fee Hike, an alliance of consumers, employees and former workers of public transport facilities, as reports came out that the Manila North Tollways Corporation (MNTC) is expecting its 2011 revenues to be bigger by 12 percent compared to previous year. The increase is attributed to higher toll fees at the North Luzon Expressway (NLEx).

Rodrigo E. Franco, MNTC president, said the increase in revenues is due to toll rate increase. The increase has apparently more than offset the slight reduction in traffic volume at the expressway. Metro Pacific Tollways Corporation (MPTC) disclosed last week that MNTC’s revenue is expected to hit P6.5 billion, higher than P5.8 billion recorded in 2010.

Against public opposition, toll fees in NLEx and other privately operated toll roads were raised by 12-13 percent last year (the SLEx rate was raised by about 300-percent). These increases threaten to be implemented at the expressway every two years, based on the Toll Regulatory Board’s approval.

With truckers, transport groups, other consumer groups and legal personalities, Tutol-Hike (formerly Tutol-Slex) had spearheaded protest actions against the then proposed toll fee hikes in both the South and North expressways. The group has also actively attended the public hearings conducted by the Toll Regulatory Board (TRB), hearings which the group later came to describe as bogus for sheer absence of public voice, participation and timely information dissemination. 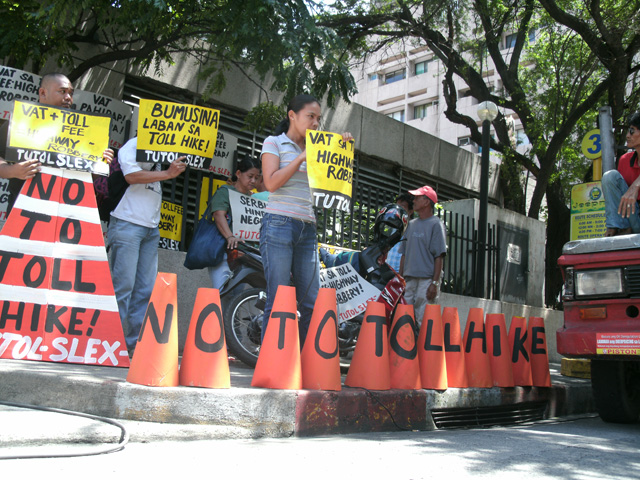 One of the many rallies against toll fee hike in 2011 (File Photo by Marya Salamat / bulatlat.com)

At one point, opponents of toll fee hikes, including chiefs of local government units, filed petitions before the Supreme Court to block the hike.

But the hike in fees was still implemented last year. Worse, the hiked toll fees were later slapped with Value-Added Tax, further increasing the cost of using the highways.

The profit growth of toll operators “is another grim reminder that the privatization of public utilities and infrastructure means nothing but increased suffering for the public and huge profits for big foreign and local corporations,” declared Sammy Malunes, spokesman of TUTOL-Hike.

Such is the profitability of toll operation that recently, San Miguel Corporation acquired a controlling stake in the operation of South Luzon Expressway (SLEX), in partnership with the Citra Group of Indonesia. Not only did San Miguel Holdings and Atlantic Aurum buy an 80-percent stake in South Luzon Tollway Corp. (SLTC), it also bought some 60 percent stake in the operation of another toll road, the Manila Toll Expressway Systems Inc. (MATES).

Scrap the people’s suffering by scrapping policies that cause it
“The TRB decision approving the automatic increase in toll fee rates every two years should be scrapped,” Malunes urged. So do the 12 percent Value-Added Tax on toll, approved by the Supreme Court,” he added.

“Ultimately, the country’s public roads and highways should be taken over by the government. That is the only way we can prevent corporations from increasing their profits at our expense,” said Malunes.

Road-building and improvement are responsibilities usually expected of the government, and one of the reasons why the people are made to pay taxes.

But TUTOL-Hike said the public is being held hostage instead by private corporations because the government has not been building safe and efficient alternative roads, as “The responsibility of building and improving roads is being handed over to private concessionaires who are only eager to squeeze profit from the people,” said Malunes.

The consumers’ group blamed Aquino’s Public-Private Partnership program, which, it said, will “further allow corporations to rob ordinary people of their meager incomes.”