“The coco levy funds would only change hands, from one Cojuangco to another Cojuangco.” – KMP deputy secretary general Willy Marbella

Return the coco levy funds to the coconut farmers.

This remains the call of the farmers organization Kilusang Magbubukid ng Pilipinas (KMP) in the wake of reports that President Benigno Aquino III has plans to utilize the coco levy funds instead of releasing it to the coconut farmers. The group warned that if the Aquino government is allowed to proceed with its plans, small coconut farmers will continue to be denied of their rightful ownership of the funds.

Recently, reports came out that the Aquino administration intends to put the multi-billion coco levy fund in a trust fund to be managed by an inter-agency team composed of Department of Agriculture and Department of Finance officials along with bankers and supposed farmers’ groups and their members. Reports also quoted Euclides Forbes, administrator of the Philippine Coconut Authority (Philcoa), as saying that the fastest means way to revive the industry would be to use the coco levy funds to build a multi-agency trust fund. It was also reported that Aquino might also issue an executive order to set up the mechanism for the proposed agency.

KMP deputy secretary general Willy Marbella said coco farmers stand against these plans being hatched by the Aquino administration, saying that the latter only intends to use the funds for self-serving purposes that will in no way genuinely benefit farmers.

Marbella is a farmer who hails from Bicol and he still has in his possession father’s stock certificates from the coconut oil mills established through the coco levy funds. 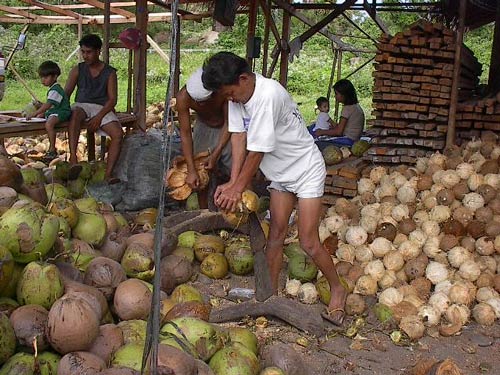 “With this scheme, we fear that the money that was stolen from coconut farmers would be stolen yet again. The coco levy funds would only change hands, from one Cojuangco to another Cojuangco,” Marbella warned. The “theft” of the coco levy funds, Marbella said, was done by former Marcos crony, presidential uncle and current San Miguel Corp. (SMC) chair Eduardo “Danding” Cojuangco Jr.

The peasant leader insisted that small coconut farmers cannot entrust their money to agriculture officials who have been previously involved in the notorious fertilizer fund scam during the previous Macapagal-Arroyo administration.

“Neither can farmers trust the various finance officials and bankers who are mainly responsible in placing the National Food Authority in deep debt. Even with a so-called farmer-representative in the proposed agency, he or she will only end up being something like a mascot for the agency,” he said.

The KMP reiterated demands for the immediate pull-out of the funds from SMC and its immediate return to small coconut farmers.

“The first thing to do is to take back the coco levy funds from the control of the President’s uncle and return it to the small coconut farmers. The Aquino government has no right dipping its hands over the multi-billion coconut farmers’ money,” Marbella said.

He called for the enactment of House Bill 3443 filed by Anakpawis party-list Rep. Rafael Mariano, seeking the creation of a “Small Coconut Farmers’ Trust Fund” using the coconut levy funds.

Under HB 3773, the trust fund would be managed by nine regular members composed of coconut farmers and two (2) ex-officio members from government namely the administrator of the PCA and the Chairperson of the Presidential Commission on Good Government (PCGG) or whatever agency that would eventually take over its mandate and functions.

Echanis also said the landmark ruling of the high court further strengthened the plunder case” they filed before the Ombudsman against Cojuangco and Enrile.

“The SC ruling further bolstered the small coconut farmers’ struggle to hold Cojuangco and Enrile accountable in the schematic and systematic plunder of the coco levy funds,” Echanis said.

This 24 percent block of SMC shares or more than 753 million shares valued between P50 to P100 billion ($ 1.162 billion to $ 2.325 billion). was part of the 47 percent block of shares that the PCGG sequestered in 1986 on suspicion that they were acquired illegally by the ex-dictator Marcos’ cronies and dummies using coco levy funds.

The high court ruling affirmed the May 2004 Sandiganbayan ruling awarding 27 percent of the 47 percent block of SMC shares to the government. (The 27 percent government stake was reduced to about 24 percent after it was diluted with the investment of Japanese brewer Kirin in SMC.)

Address the plunder cases against Cojuangco

For his part, Piglas-Quezon chair Isidro Fresco echoed the KMP’s call that the Ombudsman should immediately act on the plunder charges against Cojuangco and Enrile.

“The Ombudsman should immediately take action on the plunder charges against the President’s uncle and give justice to millions of small coconut farmers’ victimized by the Marcos & Cojuangco’s corruption,” Fresco said.

In 2003, the KMP, Piglas-Quezon, and the Bicol Coconut Planters Association, Inc. (BCPAI) filed a letter-complaint before the Ombudsman alleging that the coco levy funds were illegally used to reimburse the funds used for the purchase of 72.2 percent of the authorized capital stock of the First United Bank, the precursor of the United Coconut Planters Bank (UCPB).

In November last year, the KMP and Piglas-Quezon filed an “extremely urgent motion” asking the Ombudsman to direct the respondents to file a counter-affidavit to the criminal complaint.

The groups said 7.2 percent of the authorized capital stock went to Cojuangco. They said the 64.98 percent of the authorized capital stock that was placed in the PCA was distributed illegally to 1.4 million farmers who paid the cocofund levy, but the money was supposed to be for the payors of the CCSF, who numbered 4.5 million. They alleged that the 1.4 million farmers, who were members of the Lobregat-led Cocofed, were not genuine coconut farmers and were just dummies and business associates of the respondents.

In the meantime, while he declared his support for the coconut farmers and their demand that the coco levy funds be returned to them, Deputy Speaker and Quezon Representative Lorenzo Tañada III said there must be a clear mandate either from Congress or from the President through an Executive Order on how the fund should be utilized.

“We are talking here of at least P54 billion (US$ 1.255 billion). That’s the estimated worth of the 24 percent SMC block shares that the Supreme Court has declared as public fund. That amount should immediately be put to use to rehabilitate the coconut industry and lift coconut farmers out of poverty. Coconut farmers, together with fisherfolk are among the identified poorest sectors of our country,” Tañada said.

Tanada has filed House Bill 5070 entitled, “An Act Establishing the Coconut Farmers’ Trust Fund to Provide Adequate Financial Protection to the Coconut Industry and its Workers, Providing for the Management Thereof”. Said bill, together with other bills of the same nature, has yet to be heard by the Committee on Agriculture in the House of Representatives. A similar bill has been filed in the Senate by Enrile.