“Under the Aquino administration, public health services are no longer free but they come for a fee.” – Alliance of Health Workers

MANILA — Employees in the health sector led by the Alliance of Health Workers (AHW) and allied organizations under the Health Alliance for Democracy (HEAD) held a protest action in Mendiola, on Valentines Day, against the policy of the Benigno Aquino III administration of “cutting allocations for health services and benefits of rank and file health workers.” 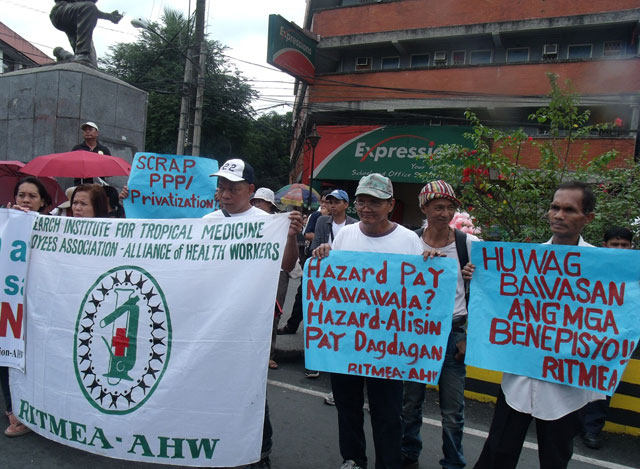 The AHW is opposing the Department of Health (DOH) department order no. 2012-0002, which effectively reduces the subsistence and laundry allowance of health workers by P30/working day ($0 .70) and P130/month ($3.02) respectively. The group has already sought clarification from the Department of Budget and Management (BDM), but the agency insisted that the reduction of benefits was “a policy decision.”

In the meantime, the AHW is also wary against the delay in the release, or worse, the probable reduction or removal of their hard-won benefits such as hazard pay and others stipulated in the Magna Carta of Public Health Workers (RA 7305) because the DBM decided to take away the “savings” in the unfilled plantilla positions from which the benefits are sourced.

Last month on January 11, the DOH released order number 2012-0002 addressed to all undersecretaries, assistant secretaries, bureau/service directors, medical center chiefs of all government-run hospitals regarding the payment of magna carta benefits to officials and employees of the DOH. 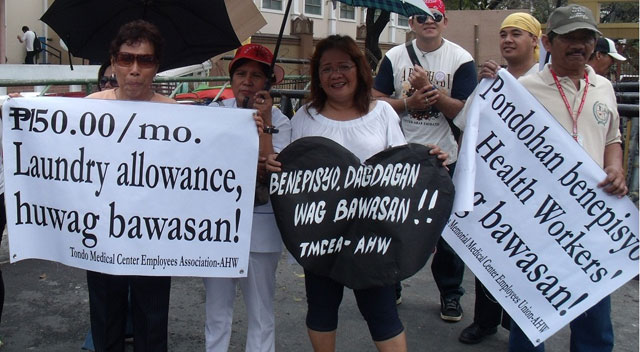 In it, the DOH led by secretary Enrique Ona said the subsistence allowance and laundry allowance of employees will be adjusted effective that same month. The memo also declared that the payment of hazard and longevity pay charged from any available savings of all government health offices and hospitals will be subject to the DBM’s approval.

AHW national president Jossel Ebesete said the Aquino government has been imposing budget cuts in the operations of most public hospitals. Since 2010, the government, Ebesete said, has been reducing allotments for direct service provisions like vaccinations, as well as removing subsidies for the hospitalization needs of indigent patients.

“The DBM is quick to say that the DOH budget increased from P32.437 billion ($754 million) in 2011 to P42. 769 billion ($994.6 million) in 2012, but the increase went to Philhealth, the public-private partnership programs in health and the contractualization schemes, RN Heals and the Doctor to the Barrios program,” he said.

Last January, the DOH launched RN HEALS, an acronym for Registered Nurses for Health Enhancement And Local Service. The project aims to make essential health services available to all Filipinos by training and deploying 10,000 unemployed nurses in communities to be identified by the DOH in collaboration with the Department of Social Welfare & Development (DSWD). 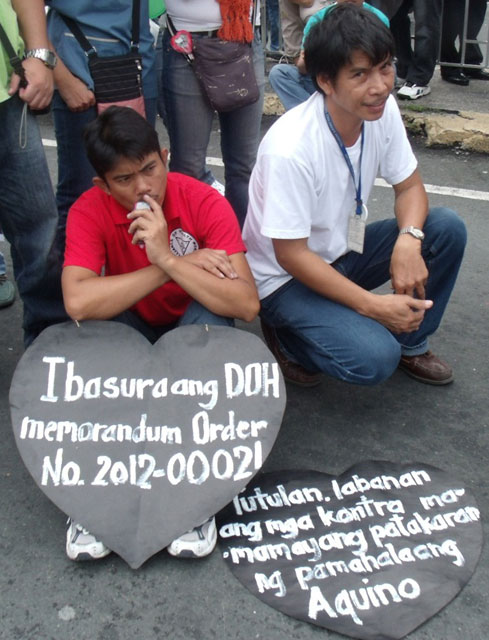 Nurses who are encouraged to apply as contractual employees for a year will undergo learning and development in accordance with the roles and functions required by the project. The DOH, DSWD and the Professional Regulation Commission will give them certificates of competency and employment.

While on deployment, the nurses will be given an allowance of P8,000 ($186) a month by the DOH, while the local government unit where they are assigned to will supervise them, ensure their safety and security, and provide modest board and lodging . The local government units are also being encouraged to provide additional allowances and benefits worth at least P2,000 ($46.50) for the nurses.

As for the Doctor to the Barrio Program (DTTB), it is now on its 18th year of implementation. Based on data from the DOH, since 1993, twenty eight batches have been deployed with 553 physicians serving 390 far-flung municipalities in 16 regions. Among the regions with the most number of doctors previously assigned are in Eastern Visayas with 84, Cordillera Administrative Region with 70, and Southern Tagalog – MIMAROPA with 67. 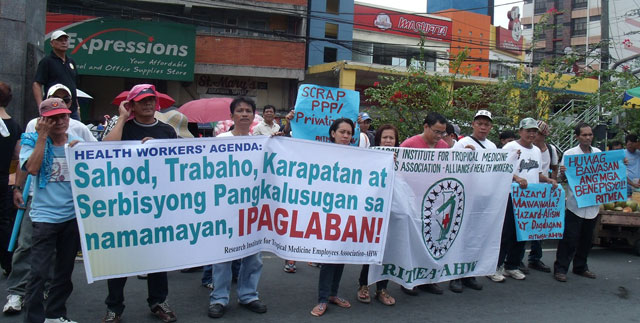 “The DTTBs are given an attractive incentive package which includes a competitive salary and Magna Carta benefits and other bonuses. Access to a vast network of government as well as non-government institutions also form part of the professional support for the DTTBs. In particular, the DOH partnered with the Development Academy of the Philippines in developing the Master in Public Management Major in Health Systems and Development Course specifically tailored for DTTBs in recognition of the learning opportunities deeply embedded in the Program.

This course provides the DTTBs with academic and technical support for the duration of the Program and enables them to earn a degree after finishing the program,” the DOH said in a report.

Benefit slash, against the law

In a letter to Health Secretary Ona, the AHW said, the DOH memorandum slashing benefits of employees violates the revised implementing rules and regulations (December 1999) of RA 7305 that set the subsistence allowance at P50 ($1.162) per day and the laundry allowance at P150 ($3.48) per month.

The memo, the group also said, runs counter to the provision in joint congressional resolution No. 4 and the Salary Standardization Law III (SSL III) which states that “Nothing in this joint resolution shall be interpreted to reduce, diminish or in any way alter the benefits provided for in existing laws on Magna Carta benefits for specific officials and employees in the government, regardless of whether said benefits have already been received or have yet to be implemented.”

Ebesete said public health workers expect the DOH administration to stand up for their rights and unite with them in pushing for upgraded benefits in the proposed IRR in the Magna Carta drafted by members of the National Management-Health Workers Consultative Council last year. 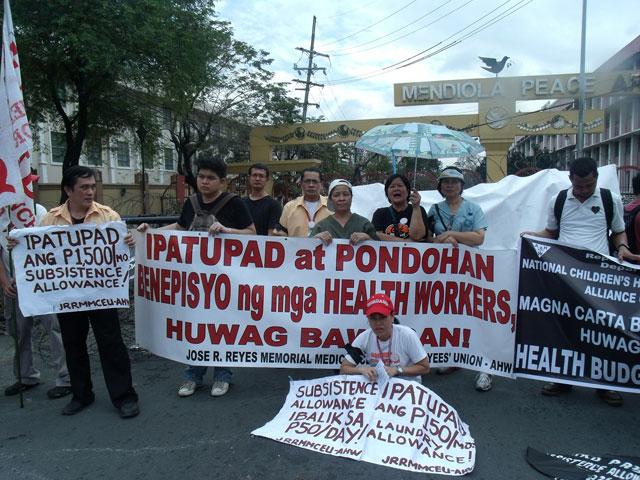 “Instead of reducing our benefits, the government should increase these given the real ‘prevailing circumstances’ such as the increasing costs of basic commodities and the rise in electricity and water rates, to say nothing of the oil price hikes. The DOH would also do well to remember section 2 of the Magna Carta that declares that it’s the government’s duty “to promote and improve the social and economic well-being of the health workers, their living and working conditions and terms of employment,” he said.

Ebesete also expressed wonderment over how the subsistence allowance of those in the armed and uniformed services such as the Armed Forces of the Philippines (AFP), the Philippine National Police (PNP), Coast Guard and the Bureau of Jail Management and Penology (BJMP) is much higher at P90 ($2.09) per day.

Public health for a Fee

The AHW official said that under the Aquino administration, public health services are no longer free but they come “for a fee.”