KMU deputy secretary-general Leandro Gerodias said the agency’s main objectives in pushing for higher contributions is to generate more funds for business projects and investments, and not so much to benefit workers in the long run.

Members of the Kilusang Mayo Uno (KMU) picketed the main office of the Social Security System (SSS) in Quezon City to protest against the agency’s plan to increase members’ contributions and invest in the Aquino government’s public-private partnership projects.

As early as April last year, the SSS, through its president and chief executive officer (CEO) Emilio S. de Quiros, announced the agency’s plan to increase members’ premiums from 10.4 per cent to 11 per cent. The announcement was met with protests and the SSS was forced to delay its implementation. 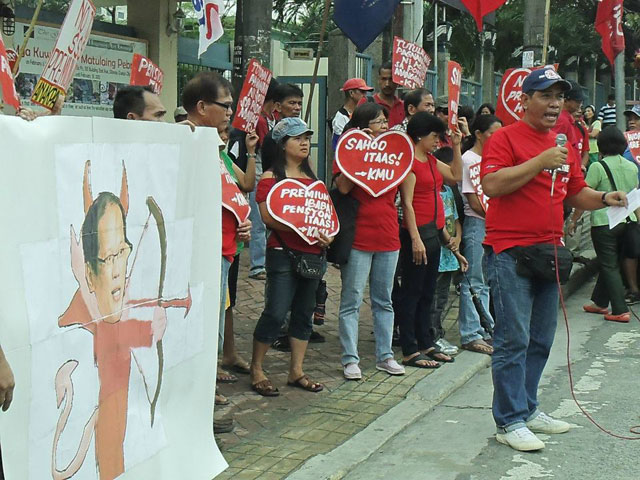 Members of the Kilusang Mayo Uno (KMU) picket the main office of the Social Security System (SSS) to protest against the agency’s plan to increase members’ contributions and invest in the Aquino government’s public-private partnership projects. (Photo courtesy of KMU / bulatlat.com)

In the meantime, the SSS also explained that the proposed increase will also extend the benefits and pension to its members from the year 2039 to 2049. Based on an actuarial valuation done in 2007, SSS’ funds are sufficient for the next 27 years or until the year 2039.The SSS has more than 29 million members.

By comparison, the contribution rate of SSS’ 10.4 percent is less than half of the 21 percent rate of the Government Service Insurance System, the equivalent pension fund for government employees. The last time the SSS imposed an increase in contribution rates was in 2007, with premiums being adjusted by one percent.

The KMU is against plans to increase workers’ contributions to the pension fund. 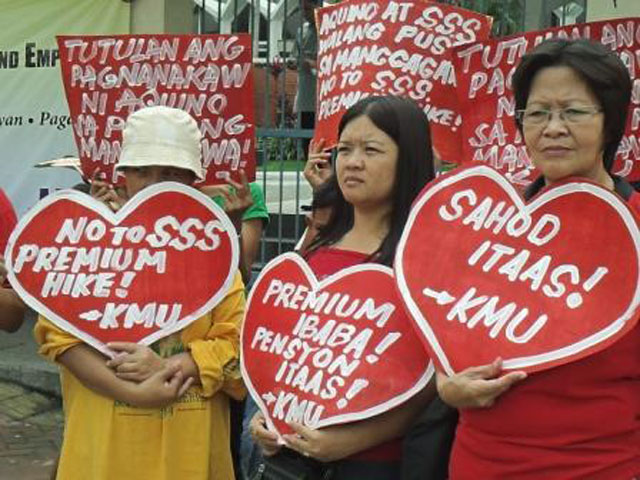 KMU deputy secretary-general Leandro Gerodias said the agency’s main objectives in pushing for higher contributions is to generate more funds for business projects and investments, and not so much to benefit workers in the long run.

“The SSS is going after workers’ hard-earned income to funnel the funds into the coffers of big foreign and local capitalists. We will not take this sitting down,” he said.

“The SSS has the funds to increase workers’ pensions without increasing workers’ premiums. We want an increase in our pensions, but not in our premiums.”

The labor leader pointed out that the SSS wants to raise workers’ premiums because it wants to aid the Aquino government in its PPP projects, as well as big business groups that want assurance for their investments.

SSS to invest in PPP projects

De Quiros has been reported in the media as saying that the SSS is prepared to invest as much as P50 billion ($1.16 billion) in the Aquino government’s PPP program for infrastructure. He said that these projects are viable long-term investments and that currently, the SSS has around P300 billion ($6.98 billion) worth of investable funds. The agency is also planning to funnel money into the local equities market, and into companies in the power industry.

“SSS’ de Quiros seems ignorant of the fact that SSS funds belong to workers, not to the government or business entities. the SSS should be advancing the interests of workers, not of capitalists,” he said. “Instead of serving workers, the SSS is planning to make life more difficult for us. Its plan will reduce workers’ already-meager wages, at a time when we are being denied a significant wage hike.

Gerodias said another reduction in their wages is the last thing workers need given the steadily increasing prices of oil and other basic commodities and services.

In the meantime, there are also business groups who are wary against the immediate implementation of the premiums hike. Business leaders in Cebu are reportedly advising the Aquino government to first do a deeper study into the proposal because of the current problems the economy is facing.

Cebu Business Club (CBC) president Gordon Alan Joseph in a report said that while he agreed with the proposed increase, his support was conditional. He said that there should be a corresponding upgrade of benefits. The business leader said the Aquino government should improve its ability to save and at the same time ensure that it gives better social services to the Filipino people, including SSS members.

Last January, the Commission on Audit (COA) released a report questioning the move of the SSS to sell its shares in the Manila Electric Co. (Meralco) for over P5 billion ($116 million) to a buyer with net assets amounting to only P60 million ($1.395 million). Media reported that the SSS sold its Meralco shares to Global 5000 Investment Inc. three years ago. 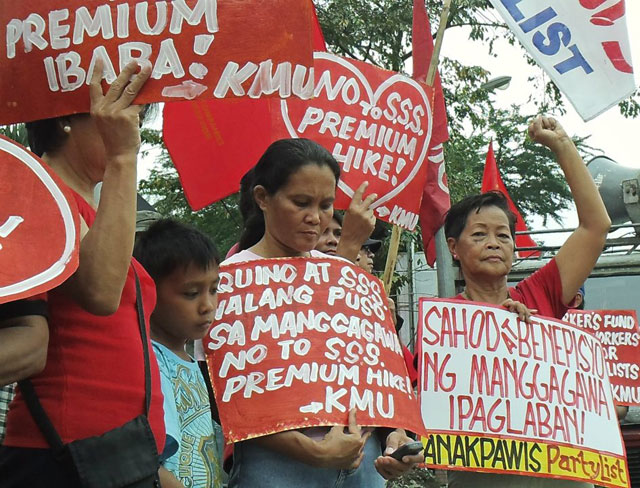 In response, Edgar B. Solilapsi, Executive Vice President – Investments Sector of the SSS said in an open letter posted by philStar online, February 7, 2012: “This is exactly the reason why the SSS required the highly-capitalized Development Bank of the Philippines (DBP) as the secondary buyer. The Board of Directors of DBP approved and confirmed under Board Resolution No. 003 dated 07 January 2009 for DBP to act as secondary buyer of the SSS-held meralco common shares.”

The SSS, in January 2009, finalized a a share purchase agreement (SPA) with Global 5000 Investment as the primary buyer and the Development Bank of the Philippines (DBP) as the secondary buyer. The 62.99 million common shares were sold at P90 ($2.09) each for a total of P5.660 billion $131 million).
In its report, the audit agency said that the sale went against the SSS Act and the guidelines for SSS funds. These guidelines state that the SSS should invest funds with skill, care, prudence and diligence. Any investments that the SSS will make should be covered by sound business practices and financial principles.

The COA said the SSS made serious business risks when it sold its Meralco shares to what it said was a “newly created company that is under-capitalized and has no track record of profitability.” The agency said the SSS management undertook a great business risk, one that was bigger than those that went with retaining its shares in Meralco.

“The SSS was never put in a disadvantaged position and never lost any money from execution date or date of final settlement. The SSS was fully covered from all perceived risks and was compensated accordingly,” Solilapsi added in the letter.

Global 5000 Investment is a holding firm that was established in 2008. In its early years, it was headed by businessman Iñigo Zobel, ex-trade minister Roberto Ongpin and business Joselito Campos. These same individuals are behind Top Frontier Holdings Inc., which now also forms the strongest voting bloc in San Miguel Corp, which, in turn, has a 27 percent stake in Meralco.