Hope despite gloom, “Imprint” shows images of impunity and struggle

MANILA — Ongoing until Feb 28 is an art exhibit that seeks to visualize the state of impunity in the Philippines. Nothing has changed in “the brazenness in the commission of human rights violations in the country,” said the End Impunity Alliance, the group that put up the exhibit. Two years after President Benigno “Noynoy” Aquino III replaced Gloria Macapagal-Arroyo, people are still being abducted, never to be seen again. Political prisoners continue to increase, and all of them continue to languish in jail to this day. 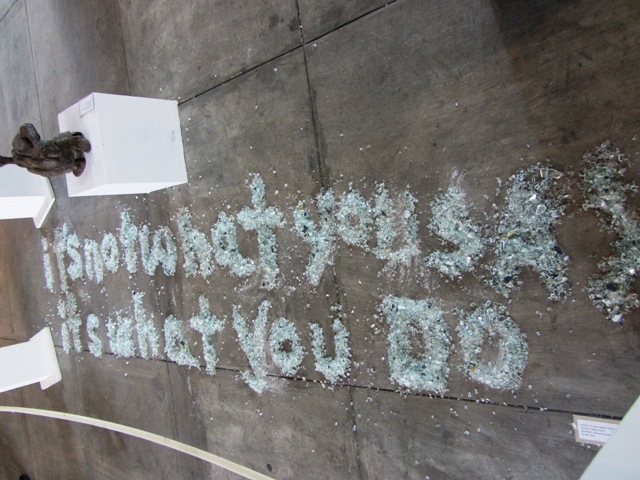 Shards of glass installation art at the entrance(Photo by Marya Salamat / bulatlat.com)

Unfortunately, according to exhibit organizers from Selda, an organization demanding the freedom of political prisoners and a member of End Impunity Alliance, there seems to be scantier coverage of the mainstream media on the continuing impunity under Aquino. Thus, the efforts of various human rights groups to bring to the public’s attention the glaring cases of impunity. With that they hope the public will better grasp the need to strike against impunity at its very core, in order to end it. 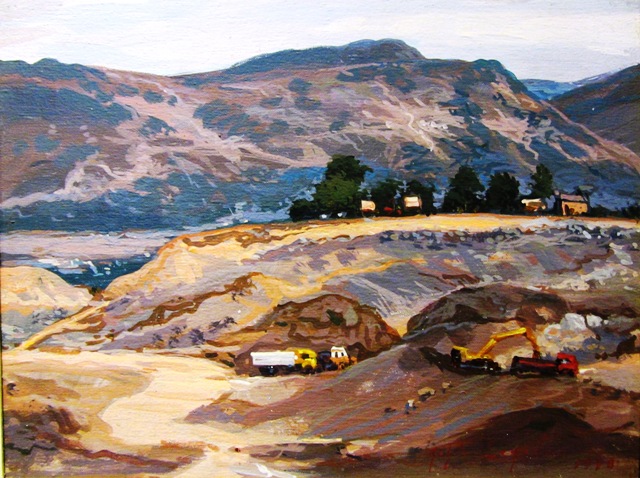 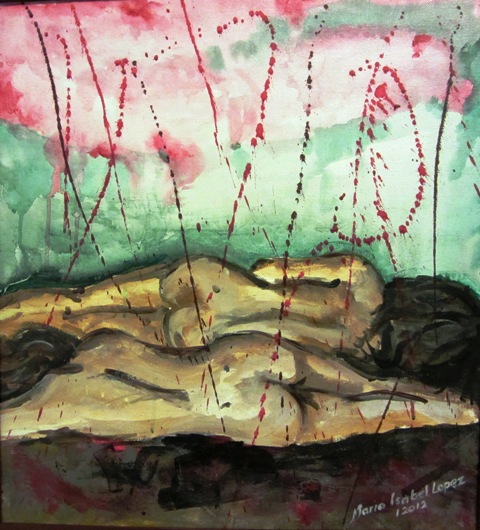 Above artwork is “Hukay sa libingan” by Gene de Loyola, below is “Si Karen at si Sherlyn” by Maria Isabel Lopez (Photos by Marya Salamat / bulatlat.com)

Entrance to the exhibit, dubbed as “Imprint, Images of Impunity” is free. It is currently located at the fourth level of Gateway Mall in Cubao, Quezon City. It offers paintings, photos, sculptures, installation pieces, posters and sketches. While some pieces are for sale, the proceeds of which will benefit the campaign and legal fund of the Cadapan-Empeño case, some artworks are shared by collectors for exhibition only.

Exhibiting artists include Maria Isabel Lopez, whose first progressive acrylic painting, “Si Karen at si Sherlyn,” is available both for viewing and for collection.

As expected, many of the artworks depict various images that directly or implicitly reveal attacks, or threats, on human rights and peace. Antipas Delotavo’s new oil on canvas called “Tudlaan,” 24 inches by 19.5 inches, and Leonilo “Neil” Doloricon’s untitled acrylic done in 2011, are some of the most obvious examples.

Despite the grim issues, the two artists delivered their historical messages in bright primary colors. Doloricon’s abducted man is handcuffed but he’s evidently struggling and not at all subdued; Delotavo’s give you colorful portraits of ordinary people who are targets of attacks. 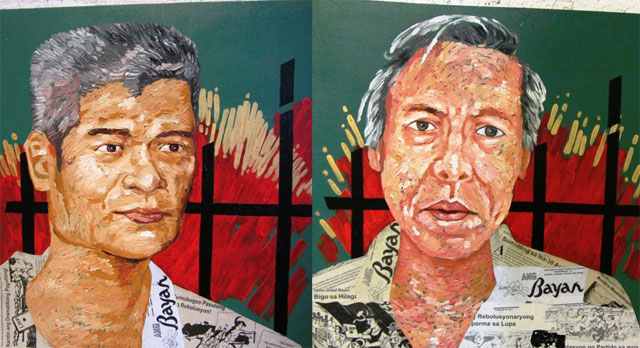 “Pain Thing” I and II, by Rose Bucud and Lorena Pacampara, are also surprisingly colorful portraits of women who will themselves to survive it all. Despite the suggestion of inherent pain in their situation, they still convey, by their facial expression, the commitment to get through it all alive and well. 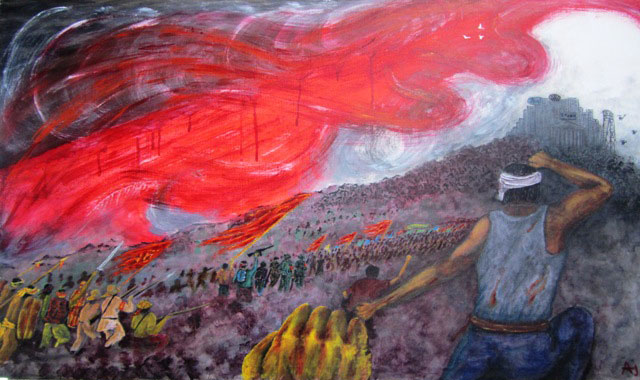 The bright, hopeful colors of artworks depicting people in a struggle also included a portrait of a street sweeper in the midst of same old situation, Ted Camahalan’s “Ganun Pa Rin” (It’s the same), a two-feet by two-feet acrylic on canvas done last year. In similar tone is the just as seemingly festive painting of Alan Jazmines, “People Power Noon at Ngayon” (People power then and now).

On the other hand, the horrible “portraits” of exploiters and their hired mercenaries are fearsome indeed. Iggy Rodriguez’ five feet by four feet “No es sagrada de familia,” painted in 2009, may ironically pass for a religious painting at first glance. Another look reveals that it is actually a very scathing “family” portrait of ruling families. Max Santiago’s “Palparan the Butcher,” an acrylic on canvas done this year, paints the legal reasons why the fugitive former general needs to be reached by the hands of justice. 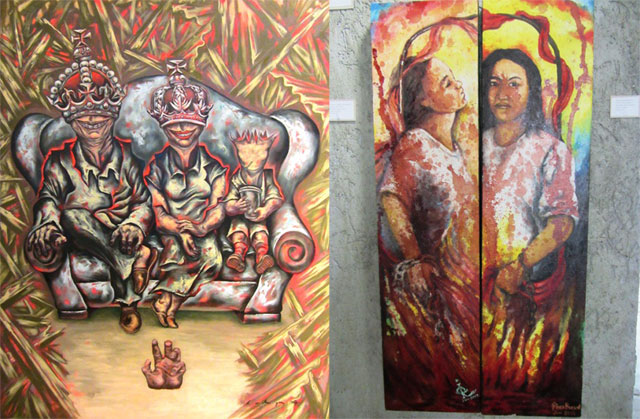 Gene de Loyola’s 1998 painting subtly reminds viewers of a Van Gogh painting, until one realizes that it is called “Hukay sa Libingan,” evoking the more recent gory Ampatuan Massacre and all the alleged burial sites of secret military and torture camps.

The bright colors despite the dismal human rights situation in the country is also shown in Larry Gil’s installation art of woven pandan pillow with scrap wood and sunflowers, which asks viewers, “Where Have all the Flowers Gone?” The message is presented in another way by the installation art that says, “It is not what you say but what you do.” It did not use cheerful colors for the hopeful message of people persisting with the struggle, but it used shards of glass for glitter and shine. 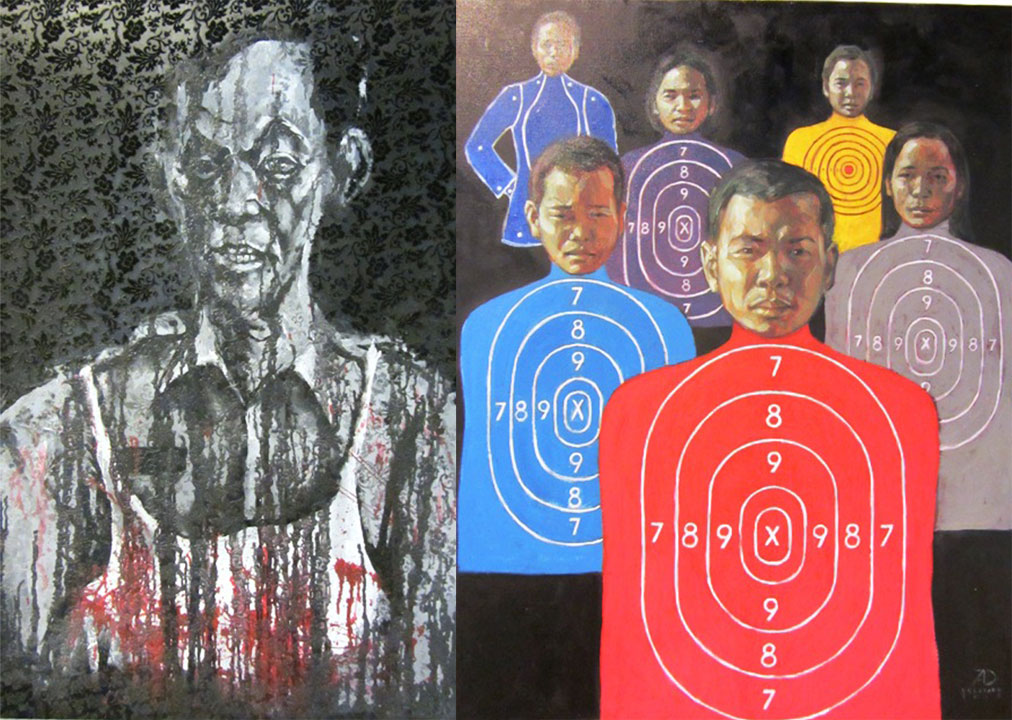 Students of Miriam College channeled the department window display in their installation art that calls attention not to fashion for sale but victims of impunity in rights violations in need of justice.

Eric Guazon’s mixed media 2 feet by 2 feet “Collateral,” done in 2009, opts for subtlety and timelessness in delivering the message for respecting human rights. The embossed, ochre piece seems right at home even in Malacañang Palace.

These are just some of the artworks on exhibit.

There is also the possibility that by March another exhibit may be put up.