You Are Here: Home → 2012 → March → 3 → ‘Commission on Higher Education toothless in regulating tuition, other fees’

‘Commission on Higher Education toothless in regulating tuition, other fees’

Main Story: Students slam new round of hikes in tuition, other fees

MANILA – Amid the skyrocketing tuition and other fees, youth groups criticized the Commission on Higher Education (Ched) for “being inutile and useless.”

Isabelle Therese Baguisi, secretary general of the National Union of Students of the Philippines (NUSP) said that even as higher educational institutions violate CHED guidelines on tuition increases, the Ched approves proposed tuition and other fee hikes anyway.

“Although there have been yearly complaints and reports about dubious fees increases and questionable consultations, no school have ever been punished for it. It’s time that schools learn their lesson; students should not be made into cash cows,” Baguisi said in a press conference with Ched officials, February 29.

Under the Ched memo (CMO) no. 13, schools are required to conduct consultations with students, faculty, alumni and non-teaching personnel associations on any plan to increase its fees. The said memo covers only tuition and not miscellaneous and other fees. Baguisi said that under the CMO 13, miscellaneous fees are left unchecked and unregulated. 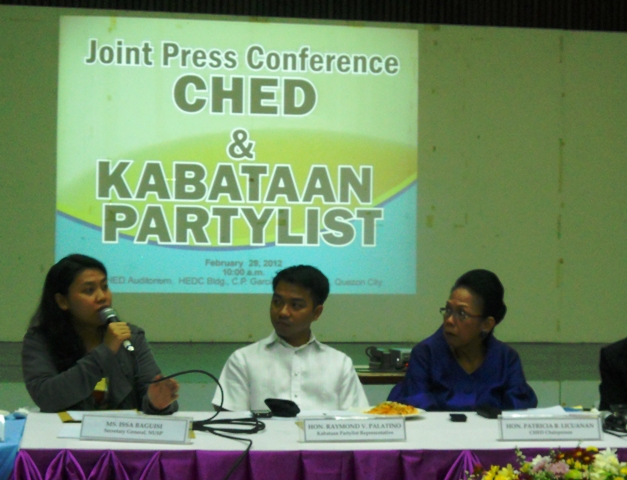 For its part, Ched expressed its commitment to implement an enhanced set of guidelines that would include sanctions on HEIs that violate the guidelines.

Julito D. Vitriolo, Ched executive director, said the Commission will implement CMO No. 03 series of 2012 for the next school year, 2013-2014. He said in a separate interview with Bulatlat.com that Ched, together with its regional offices, will be keen in implementing CMO 03.

Salient features of the CMO 03, according to Ched, are the inclusion of miscellaneous fees in the consultation and sanctions for non-compliance, which includes cancellation of school application for fee increases and the introduction of new fees. Administrative and criminal charges can also be filed against violating schools and/or its responsible officers.

Crisostomo also said the new memo will change nothing as it “affirms and continues the bogus consultation process and flawed framework of prevailing guidelines.”

Crisostomo warned Ched that the number of dropout students would increase this coming school year. According to Ched’s data, more than 80 percent of college students dropped out due to rising tuition rates or equivalent to 2.1 million students last year.

Baguisi said the Ched should not act as mere arbiters between students and schools. “Right now, students need to be protected from moneymaking schemes that certain profit-oriented schools are making. Ched is in the perfect position to do just that by not allowing schools to raise fees.”

While Palatino welcomed the Ched’s efforts to release a new set of guidelines, he said it still has to be thoroughly reviewed and circulated around different campuses and venues to equip students especially during table battles and negotiations with the school administration.

“The worry of many students is that even with the new set of guidelines the same old undemocratic practices would still prevail in many schools. This worry has strong basis. The longstanding trend has been that schools are able to capriciously increase tuition and other fees despite the existence of previous regulatory guidelines,” Palatino said.

According to Palatino, many students are intimidated during consultations because of the school’s authority and technical expertise. He said the implementation of the guidelines should ensure the holding of democratic consultations conducive to student participation.

Among the requirements HEIs should comply with, under CMO3, before they could impose an increase is submitting their financial statements to scrutiny.

Baguisi dared the Ched to crackdown on schools that violate the current tuition consultation guidelines. She said students are not only spending on tuition and other fees but also on allowances, projects and uniforms.

Meanwhile, Crisostomo dared the Ched to be relevant. “If we truly believe that education is the great equalizer, then we must ensure that there is equal access to it. We cannot allow education to be only for those who can pay for it.”

“It’s time for Ched intervene and stop the financial abuse being done by schools. They can cancel applications for increase and prevent any further increases from happening,” Crisostomo said.