Students slam new round of hikes in tuition, other fees

“It is heartbreaking when so many young people are denied the right to education simply because it has become out of reach due to the high fees.” – National Union of Students in the Philippines

MANILA – In times when prices continue to increase, another hike in tuition is a heavy burden for parents and students.

Based on the monitoring of the National Union of Students of the Philippines (NUSP), the largest alliance of student councils in the country, about 400 schools are proposing tuition increases ranging from 10 to 15 percent, not including other miscellaneous fees.

“At a time when Filipinos are being assaulted by various price increases of basic necessities, the government should try to find ways to alleviate the burden on expenses like education,” said Isabelle Therese Baguisi, NUSP secretary general. “It is heartbreaking when so many young people are denied the right to education simply because it has become out of reach due to the high fees.” 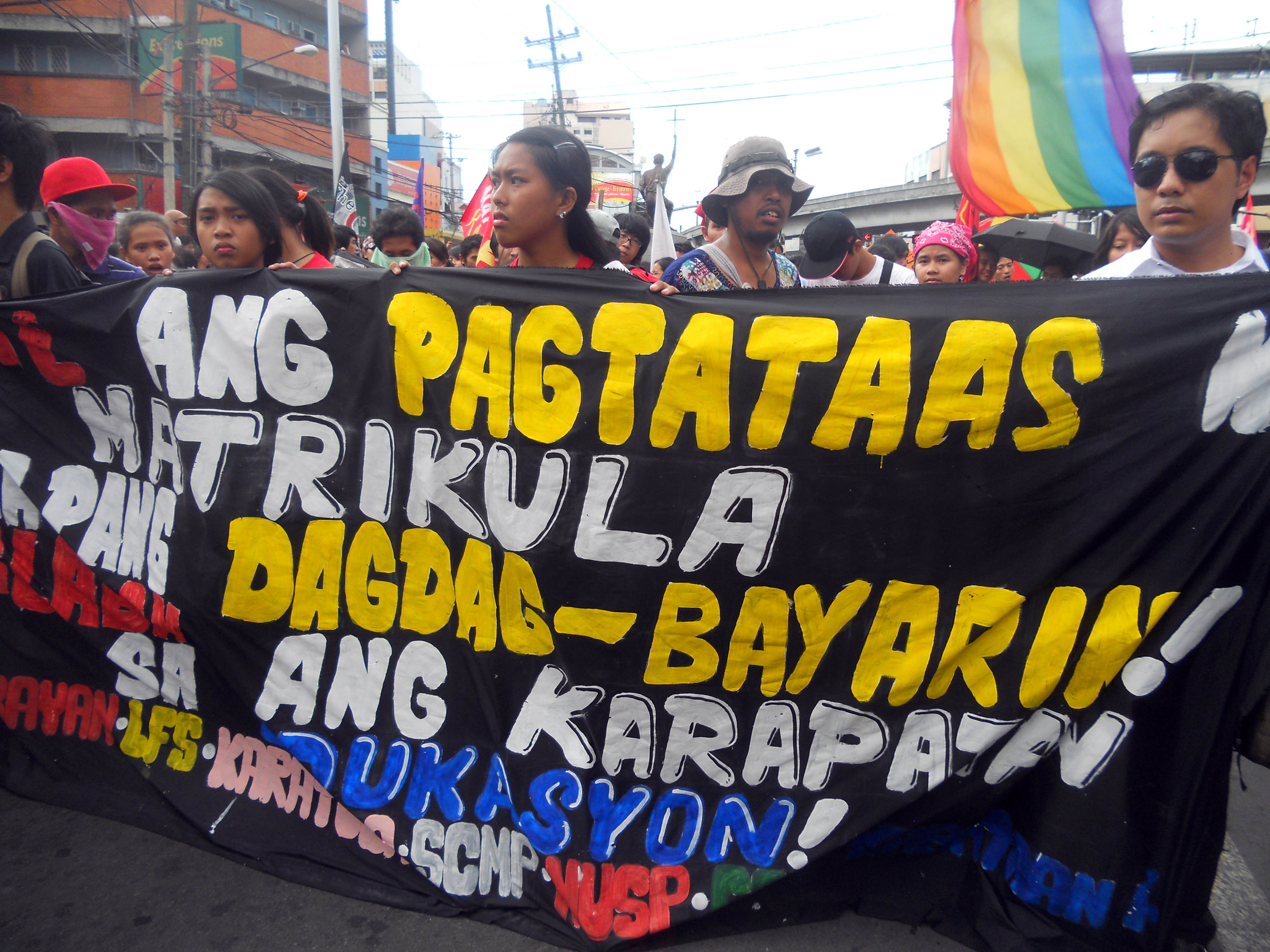 Data from the Commission on Higher Education (CHED showed that for school year 2011-2012, the average tuition increase of higher education institutions (HEIs) per unit is P36.93 ($0.86) or an increase of approximately 10 percent nationwide. The total number of HEIs that increased tuition is 324 or 14.34 percent of all HEIs nationwide.

According to the Ched, for the last ten years, the highest recorded national average rate of tuition increase was 11.6 percent amounting to P36.38 ($0.85) per unit.

“In the past 10 years, tuition and other fees have increased without any strict regulation despite existing guidelines such as Ched memo (CMO) no. 13,” Kabataan Party List Rep. Raymond Palatino said in a joint press conference with Ched officials, Feb. 29.

Under CMO 13, no tuition cap is imposed, but schools are required to conduct consultations with students, faculty, alumni and non-teaching personnel associations on any plan to increase its fees. The said memo covers only tuition and not miscellaneous and other fees.

Baguisi said many HEIs are gravely violating the CMO 13. The trend, Baguisi said, is that school administrations are calling for a consultation on the day of the submission of the proposal for increases to be submitted to Ched, which is every 28th of February. While it is stated in CMO 13 that the “consultation period must have been completed not later than 28 February of the school year preceding the school year that the intended increases take effect.”

“If there is any consultation that takes place, the school administration would tell the students that they are just informing them of the imminent increase and they are not there to be consulted. Such arrogant act violates students’ right to be consulted,” said Baguisi.

Eugene Balbas, 19, a third year student in the University of Sto. Thomas (UST) said they were not consulted of the proposed tuition increase. “The school administration conducted a consultation, but actually in that ‘consultation’ they merely told us that there would be an increase,” said Balbas. He said the attendance of the students is used as a proof that there was a consultation; the school would submit it to Ched to show that they “consulted” the students.

For the coming school year, UST is set to implement a 19 percent increase in tuition and other fees for freshmen and six percent for second year to fourth year students. Balbas also added that the university might push its policy that bars students who have unpaid tuition from enrolling and no promissory notes would be allowed. 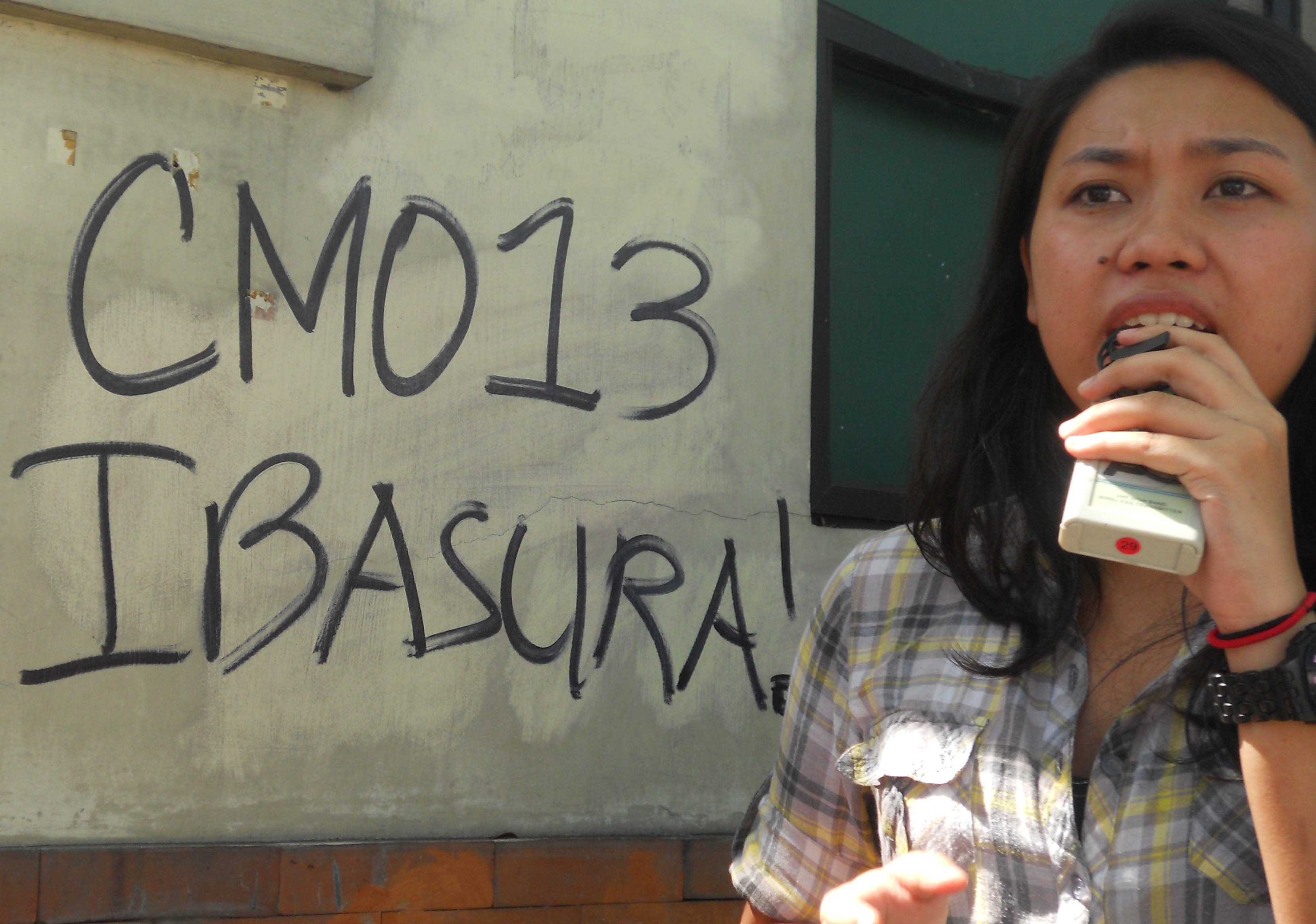 “Facing the threat of education being reduced to a mere commodity for the privileged, the youth could no longer afford to remain silent and unconcerned. Various youth groups and student councils in the country are challenging their schools to open accounting books and to justify tuition increases. We are not afraid to challenge them on this because it is our right to do so, and it is the administration’s responsibility to be forthright,” Baguisi said.

The NUSP has initiated a Tuition Monitor (TM) desk in order to look into increases in school fees for the incoming academic year and also to gather reports about sham consultations. The TM desk is where students/parents/concerned individuals can report fee increases, improper or lack of consultation, and other related matters.

Different private schools have also formed alliances like the Alliance of La Sallian students against tuition and other fee increases. UST also launched its campaign against the six percent increase in their tuition fee.

The College Editors Guild of the Philippines (CEGP) also re-launched Strike Lead, which will serve as a venue for organizations to release their media advisories, schedule of activities, analyses and other materials about student issues. Strike Lead was launched in September last year during the height of budget cuts. In the No to ToFI campaign, Strike Lead will be a center for monitoring tuition increases in schools around the country with reports coming from students.

Various indoor protests have also been conducted in different schools. Progressive student and youth organizations like Anakbayan, NUSP and League of Filipino Students also conducting protests actions and picket rallies against tuition and other fee increases.

“Amid the worsening economic crisis, Aquino hasn’t made a move to regulate fee increases and the Ched is nothing but a toothless institution. They are left watching businesses that milk the students and parents of hard earned money in exchange for education. This is what everything has come to, education is definitely now a commodity,” said Gemma Canalis, spokeswoman of the LFS.

The youth and students organizations called for a moratorium on tuition and miscellaneous fee increases.