“This is no ordinary fashion exhibit. Ours is a way to put together these issues so people would understand.” – Rep. Luz Ilagan, Gabriela Women’s Party

Related story: Three women share the burdens of working women in the country, and the world

“March 8 is International Women’s Day. The tradition of protest dates back to 1908 when women workers took to the streets to demand for higher wages, good working conditions and the right to suffrage,” Ilagan said, “It is appropriate that we bring to the forefront the issues of marginalized women. The women’s cry for social justice still rings true today as it did 100 years ago.”

Dubbed as “Women fight for social justice: A fashion exhibit against poverty and violence,” the event aimed to showcase outfits designed and created by various progressive artists such as Ramona Dela Cruz – Gaston, Alex Umali and the Ugat Lahi Artists’ Collective that depict issues that women face on a daily basis like oil price hikes, poverty, lack of locally available jobs and social services.

“This is no ordinary fashion exhibit. Ours is a way to put together these issues so people would understand. It is a blend of fashion and passion,” Ilagan told Bulatlat.com.

The launching of the event was graced by beauty queens from Ms. Earth Philippines, stylist Anj Joanna dela Cruz, among others. Also joining Gabriela Women’s Party at the exhibit opening are Rep. Isabelle Climaco, Deputy House Speaker, Rep. Angel Amante-Matba, Chairwoman of the Committee on Women and Gender Equality, among others. 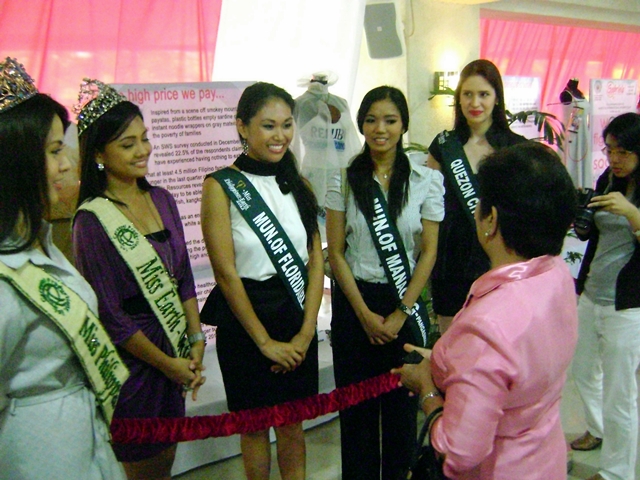 “By conducting this interactive exhibit, by using fashion as a statement, it really conveys what these women are trying to say and share to the world regarding the situation they are usually in and the different struggles that they go through each day. It’s a very interesting way to say women’s rights should be acknowledged, Cathy Untalan, executive director of Ms. Earth Foundation, told Bulatlat.com.

“This is creatively represented by a gray gown embellished with poverty: plastic bottles, bottle caps, wrappers of canned sardines and instant noodles. Poor families can barely afford three square meals a day with the high prices of food and basic commodities,” De Jesus said. “This situation worsens with the inaccessibility of services, especially health, education and housing.”

Other clothes depict the lack of jobs, low wages, insecurity of tenure and migration. A denim suit was spray painted with the words “no vacancy” and “migrante.” “The lack of employment opportunities and low wages have forced women and men to leave their children and expose themselves to situations vulnerable to abuse. Women need jobs and protection from abuse. This is the message that we want to bring across,” said Ilagan. 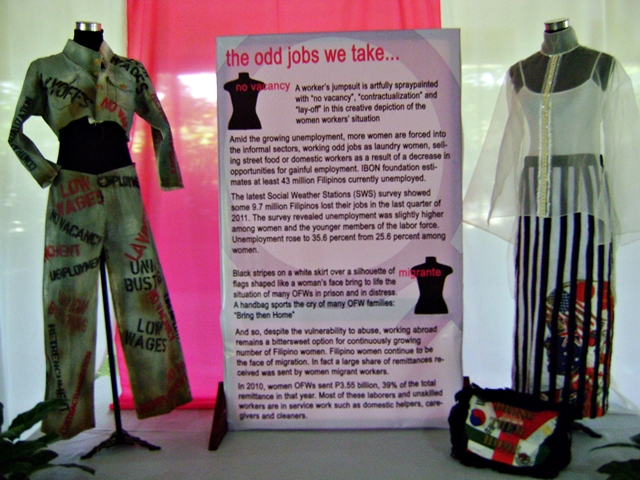 Clothes depict the lack of jobs and meager income of the Filipino masses.(Photo by Janess Ann J. Ellao / bulatlat.com)

Other issues that the exhibit portrayed are the meager allocation for social services, high prices of oil, landlessness of peasants and the dangers brought about by US military intervention in the Philippines.

“Gabriela Women’s Party seeks to raise the voices of poor women in all possible ways. It is the women who sacrifice even their most personal needs in an effort to augment financial scarcity in a household,” de Jesus said.

She added that the exhibit aims to show the need to repeal laws like Oil Deregulation Law, Electric Power Industry Reform Act of 2001, expanded value added tax and to scrap the Visiting Forces Agreement.

Beauty queens for a cause

Twenty-two-year-old candidate for this year’s Ms. Earth Philippines pageant Stephany Stefanowiiz said Ugatlahi Artists Collective’s “Langis” struck her the most. “I realized that when there is an increase in prices of petroleum products, all other prices are affected,” she said, adding that mothers, who shoulder the responsibility of making sure that their meager income would suffice for the family’s needs, are heavily affected by the price increases.

Stefanowiiz, who will be representing Quezon City in the beauty pageant, urged the Department of Energy to take measures to control the spikes in oil prices. “I am sure that we have many solutions for this.”

She added that she is overwhelmed with all the information that she has learned from Gabriela’s fashion exhibit, saying that it is “important to open our minds and ears to all the things that are happening around us so that we would be aware and fight for our rights.”

Athena Mae Imperial, the 2011 Ms. Earth Philippines title holder, for her part, said, she is saddened about how mothers are forced to leave their families to find work abroad. “That’s because there are no sufficient jobs available for women here in the Philippines.”

“With Gabriela, we do not just see ‘physical beauty.’ They are beautiful because they have a cause, such as women empowerment and the environment,” Gabriela Rep. Luz Ilagan said, “It’s what makes women beautiful — to have a mission.”

As Untalan puts it, the Ms. Earth beauties are “not afraid to go down and get dirty to help clean the world. That’s also beauty.”

Wardrobe stylist and fashion consultant Anj Joanna Dela Cruz, who also attended the launching of the exhibit, said she is impressed with the clothes that are included in the exhibit. Among her favorites is the “Red war and blue” that depicts the struggle of women against the Aquino government’s decision to allow an increase in U.S. military presence in the country.

“The material is light. It contours the curves of a woman. It is sexy without being too revealing,” she said, “The colors of the materials used convey the message.”

Dela Cruz is very happy and excited to be invited by Gabriela. “I get invited in events in Thailand to do counseling to abused women. I am no academic holder for such a difficult task. But because I consider myself as a survivor, I get to motivate my fellow women to move on.”

She shared with Bulatlat.com that she was a victim of verbal abuse in her previous relationship. “Verbal abuse is one of the most difficult forms of violence against women. It leaves no physical trace but it keeps on echoing in your mind.”

Aside from this, she also helps children back in her province in Pampanga to learn how to read and write. “Sometimes even the parents would join us. They are also very eager to learn.”

“I help my fellow women to gain their self confidence,” Dela Cruz said, adding that she is looking forward to have future collaborations with Gabriela.

Untalan said it is very hard to separate the issues involving the environment with the poverty of women. “Women are directly affected because they are managing the household. When everyone is away, she is at home. At times, women skip meals to give way to her family.”

Gabriela Deputy Secretary General Joms Salvador said there is a need for the government to quickly address the demands of women. “On women’s month, we do not just celebrate. We also continue to bring women’s issues to the national consciousness.”

Salvador said the unabated price increases of staple goods place a heavier burden on women. She added that the country remains dependent on imported oil products. She cited the reported 15 contracts of gas and oil explorations, which the Department of Energy has open up for bidding for 38 transnational corporations.

“It is urgent that the Aquino Administration open opportunities for a better life to these families by creating national industries, distributing lands through genuine agrarian reform, and making basic social services accessible to the basic masses,” De Jesus said.