Three women share the burdens of working women in the country, and the world

MANILA – Akrima Maguit, 40, is an overseas Filipino worker (OFW) who is about to leave for Saudi Arabia this week. Since her husband died in 2006, Maguit has been working abroad as a domestic helper to feed her eight children and send them to school.

“They are bright kids. I don’t want them to stop studying that is why I go abroad to work,” Maguit told Bulatlat.com. Also, she said, if she does not find work, they will go hungry.

Teresita Bista, 47, who just lost her job at the Polytechnic University of the Philippines (PUP), is worried about the future of her children. “Education is the only treasure that I can give them. How can I give them that now that I don’t have a job,” Bista said. 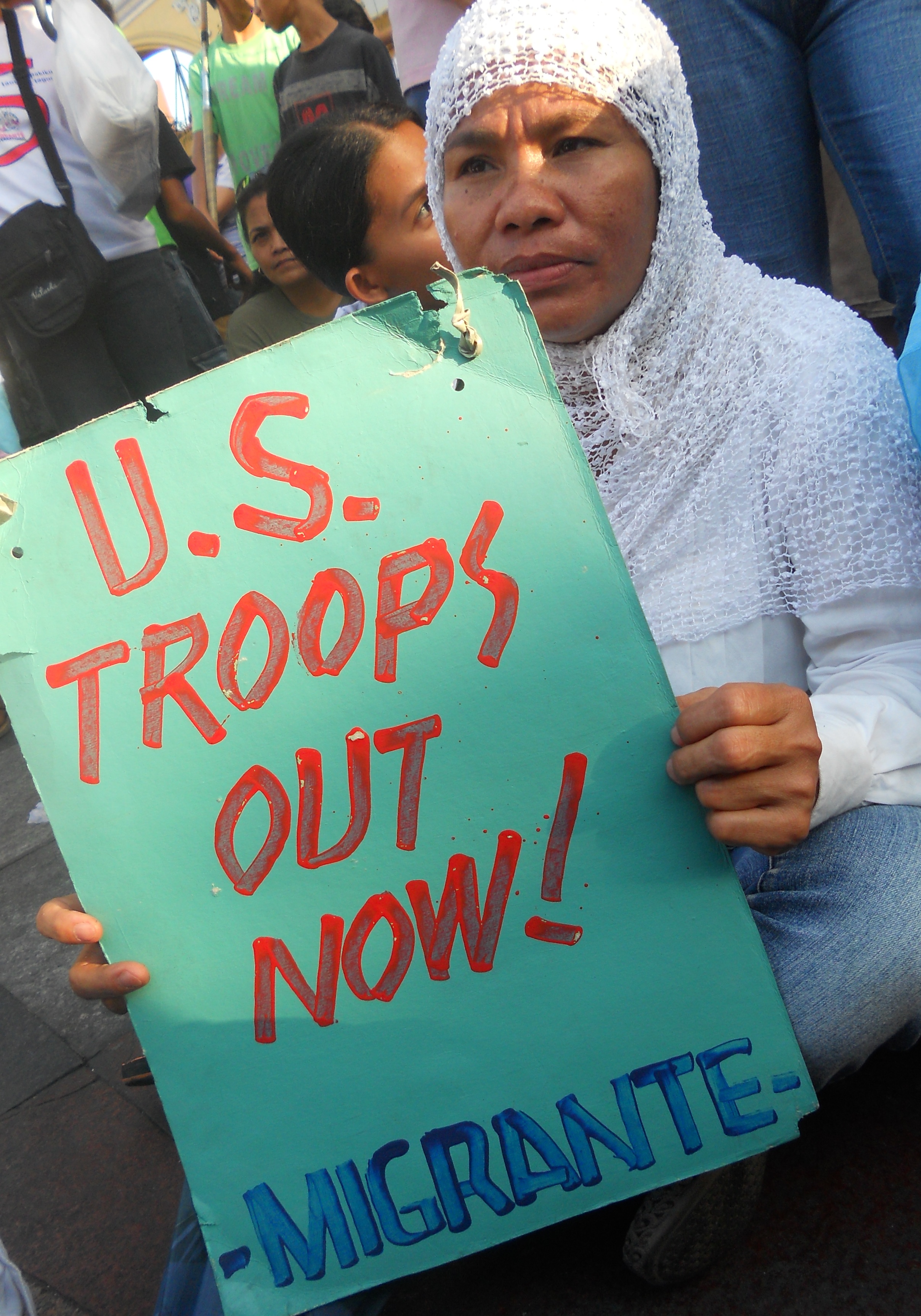 Akrima Maguit, 40, is about to leave the country to work as a domestic helper in Saudi Arabia. She said she have to go to work in abroad to feed her family.(Photo by Anne Marxze D. Umil / Bulatlat.com)

Maguit is from Carmen, North Cotabato. They used to have their own land to till and she was a franchise dealer of a direct selling company. “We had no problems back then, and we were able to send all our eight children to school,” she said.

But when then President Joseph Estrada declared an all-out war in Mindanao in 2002, their life drastically changed.

“The soldiers stationed a cannon near our house. My husband’s heart ailment became worse. He always had a nervous attack whenever they fired the cannon,” said Maguit.

The war in Mindanao made their life miserable, she said. “They killed my husband. If not for the war, my husband would have been alive today,” she said. When her husband died, she sold all their properties because she had to bring food on the table to feed her children.

Two months after her husband’s death, she was forced to work abroad. But her income is still insufficient to cover all her children’s needs. Now, three of her children had stopped studying. Only her 19-year-old daughter is able to continue with her studies because she is a scholar at the University of Southern Mindanao. She is a third year student taking up B.S. in Secondary Education, major in Biology.

Bista, on the other hand, is among the 138 janitors who were laid off by the PUP last Feb. 16. She has five children, with ages 26, 25, 20, 17, and 13, who are now living with their father in Samar. Her youngest child is in first year high school but had to stop studying because Bista lost her job. Her husband is a farmer. The older children are unemployed and are helping their father in the farm. 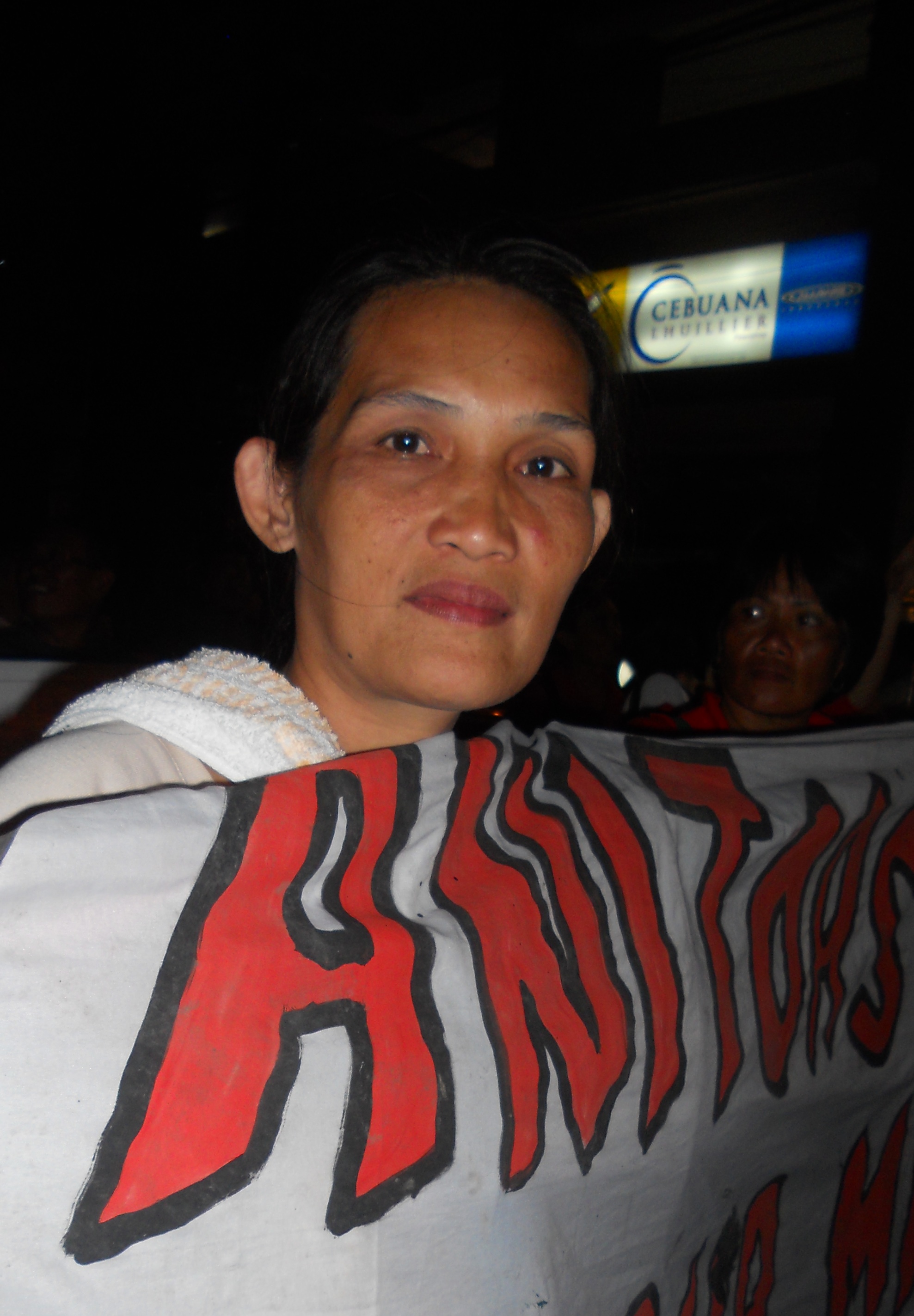 Teresita Bista, 47 who just lost her job at the Polytechnic University of the Philippines (PUP), joined the International Women’s Day protest on March 8. (Photo by Anne Marxze D. Umil / Bulatlat.com)

“What we earn is not really enough to cover all our expenses, especially now that the prices of oil products and basic commodities continue to increase. We can no longer buy what we really want, we can only buy what we could afford,” Bista said.

As of this writing, the Department of Labor upheld the right of the PUP janitors to be absorbed by the new agency that the university hired. However, the removed PUP workers are still on strike as they have not yet regained their jobs.

Sylvia Benedicto, 53, is a teacher. She is single but that does not exempt her from the difficulties of coping with the spikes in prices. The dire situation of teachers forces them to surrender their ATM cards to loan sharks because they simply could not make both ends meet.

Benedicto said, “The situation of teachers is really difficult. We are forced to acquire loans because we also send our children to school. For my part, I am helping my neighbor to finish her studies so I also feel the burden of mothers too.”

One hundred and one years have passed and women still confront the same issues. Women, such as Maguit, Bista, and Benedicto, are still suffering from poverty, low wages and forced migration. International women’s day for them is not only a day of protest against oil price hikes but also to show to the government that women would not give up in fighting for their rights.

“March 8 is important for us women because we do many things. We raise our children and make sure they have a good future. We budget our meager income for the whole family. And yet, the Aquino government is callous and has not been listening to the sentiments of women,” said Maguit.

Maguit, Bista and Benedicto joined the International Women’s Day rally on March 8. They believe they share the same concerns with other women and it’s about time that the government should do something about it.

“On the occasion of International Women’s Day, we would want to show the strength of our unity because the government is not doing anything for the people,” Benedicto said.

March 8 is declared as International Women’s Day; it was first commemorated in 1911 when women rallied against exploitative conditions in Europe.