MANILA – Government hospital workers are grappling today with demoralization as they confront a “state policy” that results in reduction of their hard-won benefits, decimation of the ranks of regularly employed public health workers, and cutbacks in free services for the poor.

“Our salaries are already very low, yet, our benefits are being reduced,” said Jossel Ebesate, national president of the Alliance of Health Workers (AHW). Ebesate decried how more and more of his fellow health workers are also being hired as contractuals who receive no job security or benefits, while our public hospitals are being eaten up by the profit-driven private sector.”

At present, the lack of plantilla positions for health workers has been compelling some public health personnel – from doctors to nurses and other health practitioners – to work duties that last from 16 to 24 hours. In the last two decades, the plantilla position for nurses, for example, has remained unchanged, despite the increase in the population during the same period. 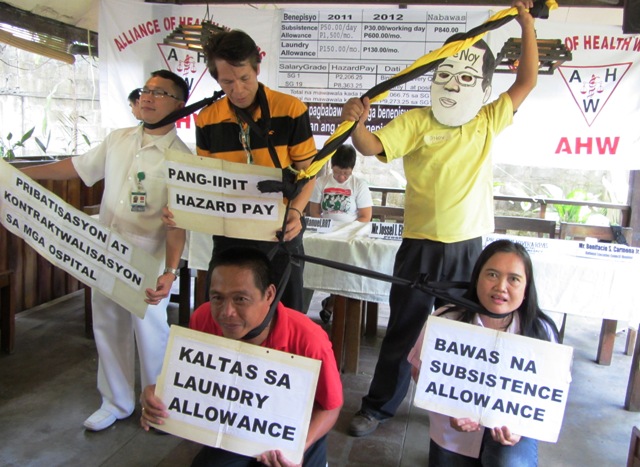 The cut was based on the General Appropriations Act of 2012, which, the health workers said, also centralizes to the Department of Budget and Management (DBM) the fund for unfilled plantilla positions and requires agencies to get prior approval from the DBM before it could release its savings and allocate it for the benefits of its personnel. The management of public hospitals source from their savings the benefits of health workers, such as hazard pay. With the DOH and DBM order, this hazard pay is now being delayed, or worse, at risk of not being given to health workers at all, said the AHW.

President Benigno Aquino III is doing something that even former president Gloria Macapagal-Arroyo did not dare to do during her unpopular rule, according to the health alliance.

Aquino is violating at least two legislations, said Emma Manuel, president emeritus of AHW, in a press conference last week. Manuel explained that the government should have been implementing the Magna Carta for Public Health Workers and using its provisions as guide in budgeting for health, and the provisions of the General Appropriations Act and orders issued by the DBM should be consistent with it. Manuel shared that the Salary Standardization Law-3 also prohibits the reduction and removal of benefits provided for by the Magna Carta for Public Health Workers.

The Magna Carta for Public Health Workers is now 20 years old, yet, it remains largely “unfunded” according to the AHW. Based on experience, Filipino public health workers only get to enjoy these benefits, such as the hazard pay, only after they have held mass actions calling for it. The practice of sourcing the said benefits from the public hospitals’ savings happened because of the health workers’ assertion, but the recent DOH/DBM order is putting even this at risk, said the health workers.

As these developed, the health alliance urged the Aquino government, once again, to respect and implement the Magna Carta for Public Health Workers (RA7305).

If such budget cuts are “state policy” indeed as admitted by the DBM representatives to the AHW during their dialogue last Feb 6, then it is “a policy that is killing people,” said Remedios Ysmael, president of the health employees’ union at the Tondo Medical Center and treasurer of the Alliance of Health Workers. 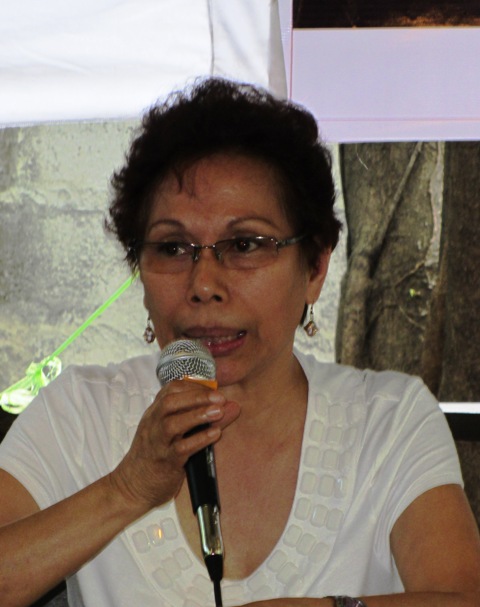 Ysmael urged the Aquino government to think twice and go easy on coming out with such a dangerous policy, because of its dire effects on ordinary Filipinos who depend on public health institutions, and on the lowly-paid public health workers.

In fact, the recent DOH order and the policy giving the DBM power over the public hospitals’ savings are considered as tantamount to the government “aiming to remove Magna Carta of Public Health Workers’ mandated benefits,” the AHW said in a statement.

The said order has reportedly practically cut by P3,000 ($70.58) the monthly salary of those in salary grade 1 level. The cuts in wages and benefits further worsen the economic difficulties of health workers, said Manuel. She shared that many among their ranks have now resorted to pawning their ATM cards as they consistently fail to make both ends meet.

This happens when health workers borrow money from private loan agencies at an interest, with the ATM card as collateral and source of payment. When the hospital management deposits into their employees’ account their wages, the creditor immediately withdraws it as payment for the money he or she lent to the ATM owner.

The health workers also slammed the “temporary” detailing of contractual nurses to places in dire need of additional health personnel. “It is a temporary solution to a long-term problem,” said Gary Liberal, head nurse of the operating rooms of Jose Reyes Memorial Medical Center in Manila and president of the employees’ union there. 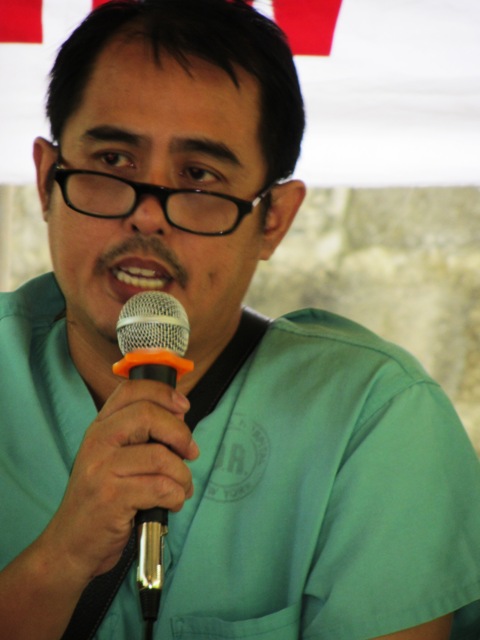 The RN HEALS program of the government is just another way of introducing contractual employment of health professionals into the public health system, said Liberal. Under RN Heals, agencies supply hospitals with nurses who are paid P8,000 ($188.22) per month, an amount lower than the pay of a regular utility employee. The DOH reportedly said the agency or the hospital where the nurses are assigned are expected to pay the nurses an additionalP2,000 ($47.06) each, but often these hospitals cannot afford that, said Liberal.

Nurses under RN Heals also receive no privileges or holiday leave, even if they perform the same work being done by regular nurses, said Liberal. Worse, with the deployment of contractual nurses, the public hospitals get to fill up half of their staffing requirement with regular nurses and the other half with contractual staff nurses.

“The solution should have been adding items for nurses in the public hospitals’ staffing complement,” said Liberal, who also said that it is quite puzzling how the government is asking for a complex set of requirements before a hospital can increase its staff, yet it knows that these are always overloaded with patients, way beyond the capacity of its beds and staff.

The AHW also disproved the supposed benefits of public-private partnership (PPP) projects, which the Aquino government is trying to implement on public hospitals. While it is true that the infusion of capital from the private sector will improve the facilities of public hospitals, the AHW said, it will also be more costly. “It would result in patients having to pay for everything even in a supposedly free government hospital,” said Bonifacio S. Carmona Jr., member of the national council of AHW and an employee of the Philippine Heart Center.