You Are Here: Home → 2012 → March → 15 → Soldiers shoot at houses of residents in Isabela, Cagayan provinces

Soldiers shoot at houses of residents in Isabela, Cagayan provinces

“Why are you shooting at us? We are civilians!” the residents shouted but their pleas were ignored.

MANILA – On December 15, 2011, at around 2:00 p.m., Dominador Martinez, 28, heard gunshots. He, along with his wife Eliha and mother Mercolina were clearing a portion of the forest for planting (kaingin).

Having lived in Purok 2 Sitio Palaspas, Brgy. San Jose, San Mariano, Isabela for years, Dominador and the residents knew another encounter between the New People’s Army and soldiers of the 51st DRC of the Philippine Army was happening. To avoid being caught in crossfire, the three decided to go home.

Dominador went to the house of his aunt, Teresa, while the two women went straight to their house.

In a sworn statement submitted to the House Committee on Human Rights, March 13, Dominador said when gunshots coming from the direction of the NPA guerrillas stopped, he saw soldiers going up the hill while several men in uniform moved toward their houses and started to fire in their direction. 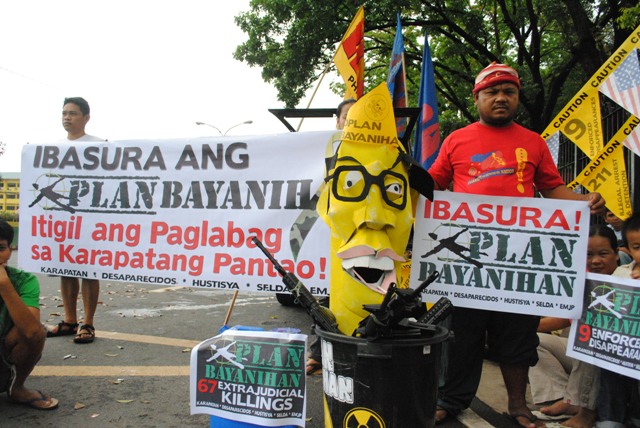 Outside the Congress, members of human rights groups hold a picket calling on the Aquino administration to junk its counterinsurgency program Oplan Bayanihan. (Photo by Macky Macaspac / bulatlat.com)

“For more than an hour, the soldiers fired their M16, M14 and M203 rifles at the direction of our house,” Dominador said in his statement. “At that time, I, my uncle Robert Wania and his seven-year-old daughter Jenny (not her real name) were sitting in front of the house…My left foot was hit by a bullet. Jenny was hit on her right leg. We went inside the house,” he said.

“I shouted at the soldiers, ‘Why are you shooting at us? We are civilians!’” Dominador said. His pleas were ignored.

Meanwhile, Mercolina was washing her feet at the well beside her house when soldiers started firing at her. She ran and heard one of the soldiers say, “There is another one, a woman!” Fifty empty shells were recovered from the site.

Five houses were strafed. Leaders of human rights group Dagami and Anakpawis Isabela turned over the empty shells the residents gathered from the scene to the House Committee on Human Rights. The Committee, chaired by Bohol (first district) Representative Rene Relampagos, conducted hearings on a resolution calling for investigations on human rights violations committed under Aquino’s Oplan Bayanihan.

In another sworn statement, Jonimar Duldulao, 36, also a resident of the said sub-village, recalled: When there was a lull, I went out of our house. The soldiers shouted at me, telling me not to go out. Still, they continued firing at our houses.”

Duldulao said that after the gunfire, a helicopter came and airlifted two wounded soldiers. The soldiers called out to Duldulao’s uncle, Orong Ofilada, asking the latter where the NPA came from. Ofilada said he did not know.

Later, Orong would find out that his chicken was also hit. A soldier took it and hooked it on his backpack. When Orong asked the soldiers why they shot his chicken, a soldier replied, “Your chicken is an NPA!”

Out of fear, the seven families living there decided to evacuate to another sub-village. “We stayed together in one house because we fear for our safety,” Duldulao said.

Meanwhile, the wounded – Jenny and Dominador – were taken to the Medicare Hospital in San Mariano the next day.

Jenny’s mother, Teresa, stated in her sworn statement: “Before we were able to reach the hospital, soldiers stationed in Alibadabad village stopped the vehicle we rented. ‘Are you the ones wounded during the firefight?’ they asked. They wrote down our names and took our pictures.”

The family stayed at the hospital from December 16 to 31, 2011. At midnight of Dec. 16, Teresa said, three soldiers went to the hospital and took their names, age and again, took pictures.

“The incident has a terrible impact on my daughter Jenny. Until now, she is often in shock. Whenever I go to the well, she would suddenly shout, ‘Mother, go home now, the soldiers are here again!’ Until now, the child is having difficulty walking,” Teresa said.

In another village, farmers also complained of indiscriminate firing.

“I heard four gunshots coming from the camp of the Cafgu/AFP located at the upper portion of the village. I went out of the house and two more shots were fired from the camp, only 30 meters away from our house. A bullet hit our roof. I immediately went inside to check if someone from the family had been hit. My children and my wife were crying,” Steve said in his statement.

The next morning, at round 7:00 a.m., three members of the Cafgu went to their house. One of them, identified only as Junjun Torino, looked at the roof and said: “We fired because the NPAs were harassing us.” Steve told Torino, “There were no gunshots coming from any other side. You were the only ones firing.”

Steve’s wife, Maryjane, in a separate statement, said that the next day after the shooting, after her husband went out of the house, Val Arago, a barangay tanod accompanied the commanding officer of the unit assigned to the barrio. Maryjane was not able to get the name of the officer but the man told her, “True. Your house was hit by a bullet but not from us. It was the NPA who did that.”

Maryjane told the military officer: “You fired the shots, you had no enemy last night.” The soldier replied,“The NPAs were harassing us that is why we fought back. Why did you text Bombo Radyo [a local radio station] about the incident. We would be tainted.”

Meanwhile, on April 1,2011, soldiers of the 17th Infantry Battalion went inside the elementary school in Lipatan village, Sto. Nino, Cagayan.

According to Isabelo Adviento, Anakpawis coordinator, who went to the place and interviewed the residents, the soldiers cooked duck for dinner. The feathers were scattered at the premises of the school. That afternoon, teachers and parents cleaned up the mess; it would be the graduation of the students the next day. The soldiers also took all the vegetables planted in the school garden. They even instructed pupils, as young as seven years old, to fetch water for them.

“Four of the students were asked to wear their uniform and were asked to hold high powered rifles. The soldiers took pictures of them,” Adviento said during the Congressional hearing.

These incidents are not isolated. In her presentation, Marie Hilao-Enriquez, Karapatan chairwoman, said that at least 5,000 individuals have fled from their homes due to intensive military operations from July 2010 to December 2011. The number, she said, could be bigger as many cases have not been documented yet.

“The terror of Oplan Bantay Laya is carried over through Oplan Bayanihan, despite its use of slogans like ‘adherence to human rights’ and so-called peace and development,” Enriquez said., referring to the counterinsurgency program of the Aquino administration.

According to Karapatan’s record from July 2010 to December 2011, there were 67 victims of extrajudicial killings, nine victims of enforced disappearance and 55 victims of torture.

Enriquez said that of the 347 political prisoners, 81 were arrested during the Aquino administration, mostly charged with common crimes. Twelve consultants of the National Democratic Front of the Philippines (NDFP) remain in detention, in violation of the Joint Agreement on Safety and Immunity Guarantees (Jasig) signed by the Government of the Philippines and the NDFP.

Karapatan called for the scrapping of Oplan Bayanihan.

The House Committee on Human Rights is set to conduct onsite investigations in Southern Tagalog, Bicol and provinces in Visayas and Mindanao.