MANILA – To jeepney driver Seth Delima Bagalacsa, president of a chapter of Piston in Quezon City, the March 15 peoples’ protest had already won a small victory since three days before, when the energy department and the oil firms announced there would be no oil price hike this week. It contradicted its previous announcements.

“They don’t want to admit that the Peoples’ Protest has anything to do with it but the people know better,” said George San Mateo, national chairman of Piston (Pinagkaisang Samahan ng Tsuper at Operator Nationwide), during the first part of their program at the Elliptical Road in Quezon City.

Bagalacsa and other drivers from his route joined the March 15 peoples’ protest, because, as he explained to Bulatlat.com while driving his jeep with the caravan en route to the headquarters of the Big Three oil firms in Makati City, “conducting mass protests evidently brought results.”

Such initial victory is “proof that mass protests are indeed effective,” said George San Mateo, national chairman of nationwide drivers’ Piston, during the start of their program at Ayala Ave. in Makati. 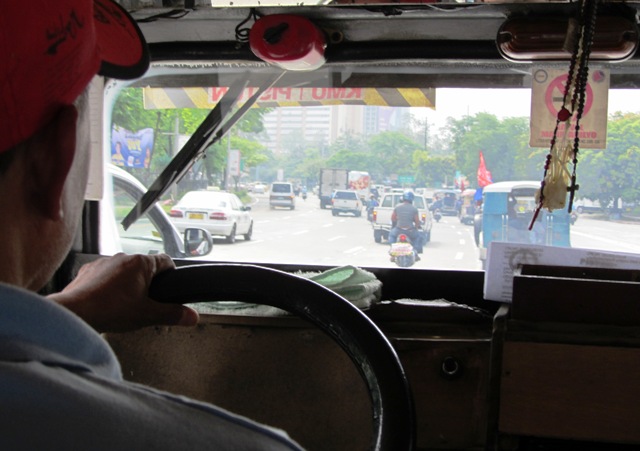 March 15 was dubbed as Protestang Bayan (Peoples’ Protest) because it was a multi-sectoral protest held not just by drivers but also by workers, urban poor groups, youth-students, professionals, families of migrants, etc. Even though it was considered as the ‘peak’ of the campaign, so far, against skyrocketing oil prices, KMU chairman Elmer “Bong” Labog said the workers led by KMU will still launch “bigger protests in the coming months,” until some relief from increasing oil prices is achieved.

Multi-sectoral groups of protesters set up more than 30 protest centers in the National Capital Region, including those in Monumento, Batasan, Sta. Mesa, Delpan, Philcoa, and Araneta Avenue. Protests were also held across the country, from Baguio City to the urbanized towns in Southern Tagalog, from Aklan to Panay to Cagayan de Oro and Davao in the South. The drivers’ group Piston also held a protest caravan from Quezon City to Makati City, one of its biggest since it started doing protest caravans.

Protests were held in the morning, during lunchtime, and after office hours. More than a hundred student councils and publications, campus and youth organizations, and community-based groups reportedly joined. Led by the youth group Anakbayan, the organizations under the KKK, or 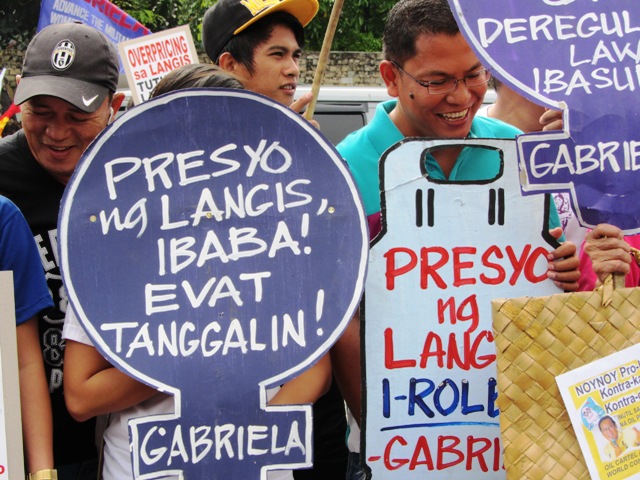 Protesters say Aquino has many doable solutions for skyrocketing prices of oil.(Photo by Marya Salamat / bulatlat.com)

Deceit and threats as response

The Peoples’ Protests listed at least three main demands, namely removing the Value Added Tax (VAT) on petroleum products, repealing the Oil Deregulation Law, and nationalizing the Philippine oil and energy industry. In the short-term, protesters are demanding an oil price rollback of as much as P9 ($0.21) per liter, the amount which they say represents the “overpricing” of oil companies. They based it on simple computations, which compared international prices to local prices. The oil companies have been challenging the computations, but they have not opened their books to scrutiny.

Protesters are armed with researches despite the notorious secretiveness of the oil firms when it comes to their books. Based only on available data, for example, Bayan Muna Rep. Teddy Casiño said oil companies are raking in about P147 million ($3.4m) every day from overpricing the local pump price of diesel alone. Almost 78-percent of this amount goes to the four biggest oil companies in the country (Petron – P55million $1.3m] daily extra profits from overpriced diesel; Shell, P38 million [$0.9m]; Chevron, P15 million [$0.4m].; and Total, P8 million [$0.2m]).

Yet, the public utility drivers who are forced to absorb the increases as long as fares are not adjusted said they are losing P96 ($2.25) or more every day they ply their route. As a result, Piston has recently been compelled to demand a nationwide P1 fare hike for their survival.

Instead of addressing this persistently denounced oil overpricing, the Aquino government has “overreacted” to the Peoples’ Protest, according to youth group Anakbayan. The Aquino administration deployed a big number of soldiers from the Armed Forces of the Philippines and the Philippine National Police in response to the Protestang Bayan. They outnumbered the protesters as exemplified in the stalled caravan in Ayala where a firefighting hose was also readied just in case, and more police and security guards blocked the private street from marching protesters.

Malacañang through Presidential Spokesperson Abigail Valte, also warned that they would suspend the franchise of jeepney drivers who would participate in the transport caravan of Pagkakaisa ng mga Samahan ng mga Tsuper at Operator Nationwide or PISTON. Meanwhile, Metro Manila Development Authority Chairman Francis Tolentino also warned that protesters who would conduct ‘planking’ would be dispersed. 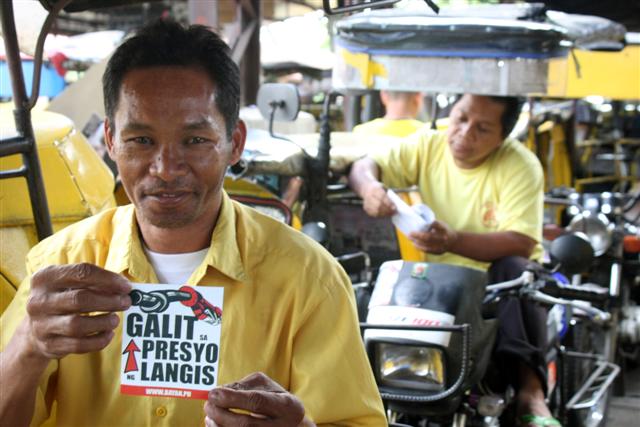 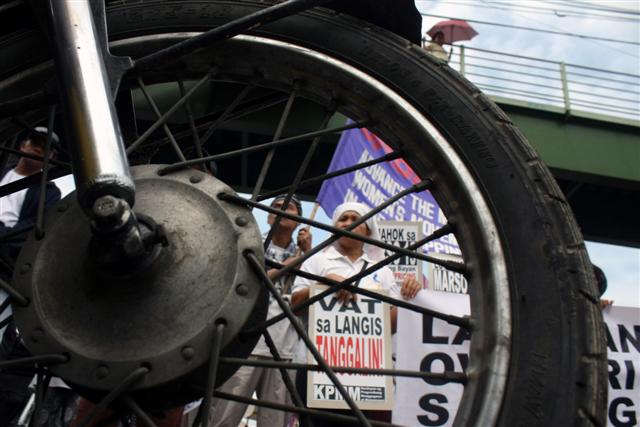 Tolentino also spent March 15 “spreading lies” about the nationwide protest, “misrepresenting it as a transport strike and preparing the ground for belittling it.” According to San Mateo, the people’s protest was the peak of the anti-oil deregulation campaign of progressive groups.

The drivers’ group said that as early as three days before, the Aquino government had been known the conduct of the Peoples’ Protests that included transport caravans, rallies, noise barrages and other peaceful means of assembly. “The Aquino government is not that stupid it couldn’t distinguish between a strike and a rally,” said San Mateo.

But the misrepresentation of the Peoples’ Protests has been used as justification for unleashing on the streets a big number of soldiers and police to control the protesters, said Renato Reyes, secretary-general of Bayan. Reyes criticized Malacañang for calling the protest as a “nuisance.” He urged it instead to train its guns on the oil cartel.