MANILA – Fe Nibasa, 39, brought along her seven-year-old son, the youngest of her five children, in a protest action against the incessant oil price hikes at Stop and Shop, Sta. Mesa, Manila, March 14. Nibasa, the breadwinner in the family and a single parent, just lost her job. She is one of the 180 janitors of the Polytechnic University of the Philippines (PUP) who have been retrenched.

“Because of oil price hikes, the prices of other commodities also continue to increase,” Nibasa said. “And this government is doing nothing.”

For ten years, Nibasa worked as a janitress in PUP but had been classified as a contractual worker with a daily wage of P426 ($9.90). The amount, she said, was not enough to feed her five children and two grandchildren. Her son-in-law is also a contractual worker and does not have a fixed income. These days, Nibasa relies on the generosity of supporters of their strike. 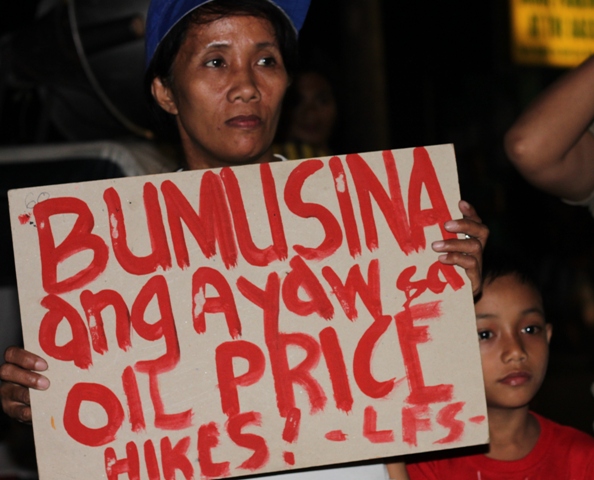 Fe Nibasa, now jobless, is enraged that the government is doing nothing to stop oil price hikes.(Photo by Ronalyn V. Olea / bulatlat.com)

While oil companies rake in millions in profits and the government collects millions from the expanded value added tax (E-VAT) on oil, ordinary citizens like Nibasa find it more and more difficult to make ends meet.

Noli Rodelas, 42, a worker at a local factory in Valenzuela, along with his two children who are both students of PUP, also joined the protest action in Sta. Mesa.

The only breadwinner in a family of five, Rodelas, who has been in the company for 24 years, earns a little above the minimum. “What I earn is really not enough. I have no choice but to borrow money,” Rodelas said.

Each of his two children spends P70 ($1.63) a day for transportation. They have to stretch their daily allowance of P130 ($3.02) for food and their requirements in school. Rodelas’s youngest child is in high school and goes to the school near their place.

“If only the government junks the Oil Deregulation Law, scrap the E-VAT on oil and other basic commodities, we would feel relief,” Rodelas said. 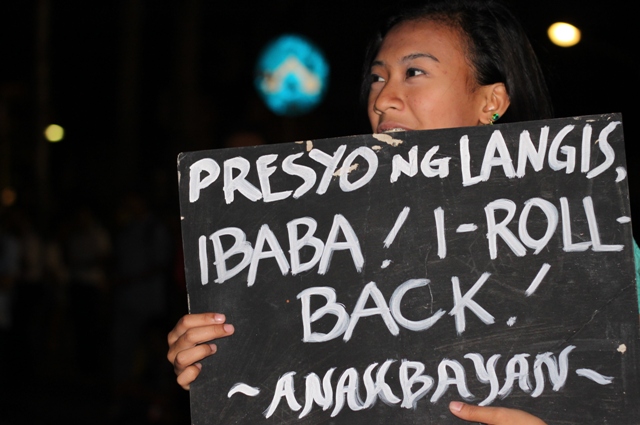 The eldest of four children, Legisma said her parents knew that she has been joining rallies against oil price hikes. “They support our call to regulate oil price hikes. Of course, they are also affected as prices of basic commodities also increase every time oil prices jack up,” she said.

Meanwhile, in sitio San Roque in North Triangle, Quezon City, residents held a protest action calling for the scrapping of the oil deregulation law. They planned to block the flow of traffic in Edsa. But as protesters rushed toward Edsa, they were met with truncheons from the combined forces of police and personnel of the Metro Manila Development Authority. A seven-year-old boy was reportedly hurt during the violent dispersal.

Richard Chong, chair of youth group Anakbayan-North Triangle, said the youth in their area are heavily affected by the unabated oil price hikes, and, consequently, prices of other staple commodities.

“We hardly have access to social services, especially health and education. Our parents, on the other hand, have no choice but to work for capitalists who give us meager income,” Chong said.

He added that for every increase in oil prices, it is expected that prices of other basic commodities would also increase. Chong said this is a heavy burden to families residing in urban poor communities since they hardly have stable and regular jobs.

Aside from the increase in oil prices, Chong said, the urban poor also face threats of demolition every day.

“As the price of basic commodities continues to soar and more cases of demolitions in urban centers are to be expected as the school year ends by March, the urban poor has no choice but to stand for their rights and pour into the streets,” Bea Arellano, chair of urban poor group Kadamay, said.

“The inaction of Aquino on the oil price increases and overpricing scheme of the oil cartel is very unforgiveeable. It would need the people’s united effort to bring the Aquino administration to its knees for its subservience to the imperialist oil cartel,” Arellano said.

Even government employees joined the National Day of Protest against oil price increases despite the reported warning issued by Malacañang, hoping to dissuade them from joining the protest actions. At around lunch time on March 15, employees of government offices along elliptical road walked out from their offices to participate in the protest action.

“This is a concrete proof that state workers are also strongly affected by the unimpeded rising costs of oil and petroleum products which result in consequent increases in the prices of goods and services,” Courage national president Ferdie Gaite said, “With an average pay of less than $186 a month sans mandatory deductions, an ordinary employee could no longer cope with the staggering costs of living.

Gaite added that the Aquino administration is “doing nothing given the situation. In cahoots with the oil cartels, they are bleeding the people to death for profit.” During the protest action, he added that government employees are tired of hearing that the government is helpless in intervening on the oil price increases. “Laws can be changed,” he said, adding that the Oil Deregulation Law should be scrapped.

Manny Baclagon, an employee and union leader from the Department of Social Welfare and Development slammed their government agency-led project Conditional Cash Transfer, saying that it would be of no good to Filipinos. “Since it is a loan from the World Bank, the people, through our taxes, will still pay for it. On top of this, the government is allowing oil cartels to rake in superprofits.”

Aside from the oil price increases, government employees have long been demanding for a decent wage. As Glo Almazan of the Department of Agrarian Reform puts it, “There’s price increase everywhere, from oil to staple commodities to our children’s tuition. But not our salary.”

While the national day of protest has concluded in simultaneous programs in protest centers at around 7 p.m., the fight against unabated oil price hikes will continue. The urban poor group and its members are preparing for a bigger protest action in the coming days “as the Aquino administration continues to defy the calls of its people. Aquino’s inaction against oil price hikes, and implementation of anti-poor policies will certainly spark an upsurge in the urban center.”