You Are Here: Home → 2012 → March → 16 → Vilification of activists continues with Oplan Bayanihan

After investigating extrajudicial killings here in 2007, Philip Alston, then UN Special Rapporteur for extrajudicial executions, tagged the vilification of activists as one of the practices that gave rise to these killings. But vilification has continued.

MANILA — Twenty-year-old Mildred Salang-ey was shocked to receive a subpoena on March 5, 2011. She was charged with murder, frustrated murder and attempted murder by the 86th Infantry Battalion of the Philippine Army.

The military accused Salang-ey, a member of Mt. Province Youth Association and Anakbayan, as one of the New People’s Army guerrillas who launched an offensive against the Philippine Army on February 26, 2011 in Asipulo, Ifugao.

“My family was in disbelief. It [filing of charges against me] had dire effects on my studies and on my family. They were so worried. My sibling suffered a psychological problem because of this,” Salang-ey said in Filipino during a hearing of the House Committee on Human Rights, March 13. Salang-ey was a student of the Mountain Province State Polytechnic College in Bontoc.

Salang-ey was one of the witnesses who testified before members of the committee regarding the continuing vilification campaign of the military against development workers and activists.

Through the help of Cordillera Human Rights Alliance, a local chapter of Karapatan, Salang-ey was able to file her counter-affidavit. On December 22, 2011, the case has been dismissed due to lack of merit. 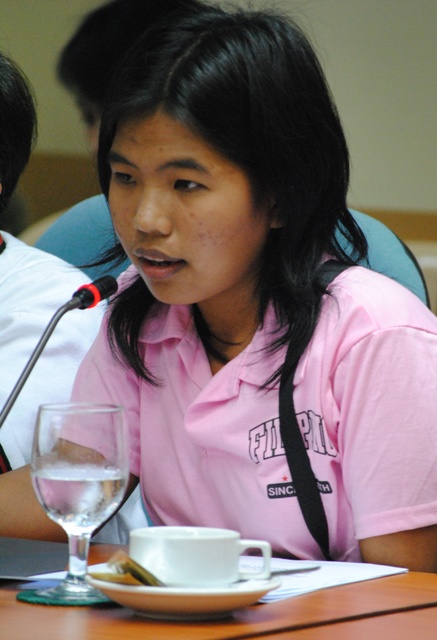 Mildred Salang-ey, 20, testifies before the House Committee on Human Rights, March 14, on the harassment she experienced in the hands of the military (Photo by Macky Macaspac)

“The accusations by the military have no basis at all,” Salang-ey said. “We have our rights as humans. We have the right to do what we think is right,” she said.

Meanwhile, Milagros Aowat, 58, a staff of the Community Health Education, Services and Training in the Cordillera Region (Chestcore), could not accept that her more than 30 years of service to the poor communities in the region as a health worker would be the very reason why she experienced several forms of harassment.

From December 2010 to July 2011, Aowat had been receiving death threats through text messages. Like Salang-ey, she was accused of being a member of the NPA. “At first, I thought it was a joke…When the other messages came in, I realized that the threats were real and were no doubt meant for me,” she said during the hearing.

“…[t]he systematic harassment, vilification and tagging that I have experienced as a community health worker have very much shaken me physically, emotionally and mentally and have gravely affected my family and my work,” Aowat told the members of the committee.

Aowat also noticed that for several times, she was being tailed on her way home. “Since that time, I have become very anxious, paranoid and very depressed,” Aowat said. She suffered a stroke that affected her speech, her memory and worsened the vertigo she is already suffering from.

Aowat said her volunteer work had also been disrupted. She was in charge of the medical program of the office and her condition hampered the delivery of much-needed health services to the marginalized indigenous peoples communities the group is serving. “To our region who has been historically neglected, the attacks against me and our office are tantamount to attacks against the Cordillera people,” Aowat said.

The Chestcore decided to file a complaint before the Commission on Human Rights (CHR)-Cordillera Autonomous Region (CAR) on March 17, 2011. A second complaint was filed on August 4 of the same year. The CHR, however, dismissed the case in November 2011.

Now, Aowat said she is seeing a cardiologist, a neurologist and a psychiatrist. “Deep inside me, I know that medical and psychiatric care are not enough. I believe that my healing will be very difficult and I am willing to go all the way but it will never be complete until justice has been served,” she said. 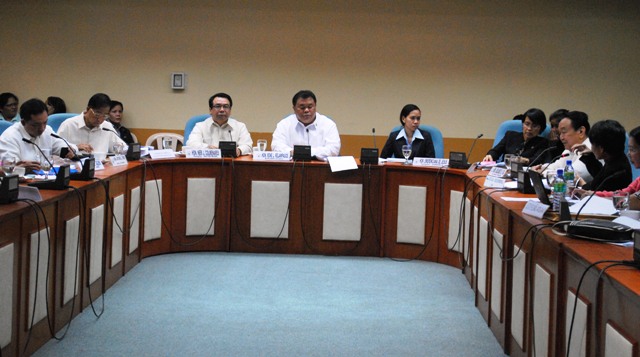 Members of the House Committee on Human Rights listen to the testimonies of witnesses on the implementation of Aquino’s Oplan Bayanihan in the provinces. (Photo by Macky Macaspac)

The cases of Salang-ey and Aowat are not isolated. Jude Baggo, CHRA secretary general, told the members of the committee that their group, along with other organizations affiliated with the Cordillera Peoples Alliance (CPA) and even non government organizations such as Montañosa Research and Development Center (MRDC), Center for Development Programs in the Cordillera (CDPC), Cordillera Disaster and Response (CorDis) have been tagged as fronts of the Communist Party of the Philippines (CPP).

Even scholars of progressive party lists such as Kabataan and Gabriela, specifically those at the Ifugao State University (IFSU) and Kalinga Apayao State College also experience red tagging and surveillance, Baggo said.

“We fear for our security as persons and communities. Our organizations and communities are classified as ‘fronts’ and then as ‘enemies of the state’ and are accordingly considered to be legitimate targets for “neutralization” by State security forces and their agents,” Baggo said.

Elsewhere in the country, in Amulung, Cagayan, members of Anakpawis are labeled as NPA members.

Fifty-year-old Carmelita Munduc, a member of Anakpawis, was approached by two men on her way to a bus terminal on October 30, 2011. In her sworn statement submitted to Congress, Munduc said the men introduced themselves as intelligence operatives of the 17th Infantry Battalion of the Philippine Army.

The men told her, “Surrender, Manang Lita.” She replied: “Why? What did I do wrong?” The men said they know she is a member of Kagimungan, a local organization and Anakpawis. When Mundu said she finds nothing wrong with that, the men said: “Don’t you know that Kagimungan and Anakpawis are NPA?”

The men showed her a list of her so-called “comrades.” All are members of Anakpawis and Amihan, an organization of peasant women. The men attempted to bring her to their “boss” but Mundu managed to go inside the bus.

Another member of Anakpawis, Efren Cabildo, 33, was also harassed several times. On Sept. 29, 2011, a certain Valmar Agustin who introduced himself as a policeman and his two companions went to Cabildo’s house in barangay Manalo, Amulung, Cagayan. Cabildo was away during that time. The men left a message for him through his sibling. The men said they would give him a job and a cellphone in exchange for information about the activities of Anakpawis and its coordinator in the province, Isabelo Adviento.

On October 2, 2011, at around 10 p.m., Cabildo went to the place where he usually parked his motorcycle. He was about to go home when a vehicle stopped near him. Then, two men riding in tandem in another motorcycle passed by. Sensing danger, Cabildo hid behind the trees nearby. He called up his companions and left the place.

Baggo said nothing is new with Aquino’s counterinsurgency program as it continues to label progressive groups as communist fronts like the Arroyo’s Oplan Bayanihan. For the military, there remains no distinction between the political activists and combatants.

Former United Nations Special Rapporteur for extrajudicial, summary, or arbitrary executions Philip Alston, in his report after a mission to the Philippines in 2006, recommended that such practice be stopped.

In a related development, Bayan Muna Representatives Teddy Casiño and Neri Javier Colmenares filed on March 6 House Resolution No. 2225 urging the House of Representatives to condemn the vilification of persons because of religious, political and organizational affiliation and to support the recommendations of Alston to put a stop to the practice of vilification.