In another twist in the long-standing agrarian dispute at Hacienda Luisita of the Cojuangco-Aquino clan, a Tarlac court issued warrants of arrest against the farm workers for cultivating the land for survival.

MANILA – A local court in Tarlac City issued yesterday a warrant of arrest for 22 farm workers of Hacienda Luisita on charges of grave coercion.

The RCBC filed the charges in July, two weeks after the farm workers cultivated portions of the 184 hectares of land being claimed by the bank. The RCBC acquired the land on November 24, 2004 as payment for the loan obligations of Luisita Industrial Park Corporation (Lipco). The transfer was made eight days after the massacre on November 16, 2004 that claimed the lives of seven farm workers.

“We will face the charges. In doing so, we expose the rottenness of the Aquino administration and its collusion with landlords and capitalists,” Bais told Bulatlat.com in an interview, March 19.

“It is very clear that the Aquino administration does not want to give us land to till or, more correctly, to return to us the land that they have taken from us,” Bais said in Filipino.

The farm workers have been fighting for their land for more than 50 years. Since 1957, when the Cojuangcos acquired Hacienda Luisita using a government loan, the Cojuangco-Aquinos have been using every trick in the book to maintain their stranglehold in the more than 6,000 hectares of land.

After the farm workers staged a strike in November 2004, they started cultivating portions of land that used to be planted with sugarcane. During the implementation of the stock distribution option (SDO), farm workers were prohibited from planting palay (rice) and other crops.

“The charges have no legal and factual basis,” Pahilga told members of the media, March 20. “The farm workers did nothing wrong, they just cultivated the land for survival. This is harassment.”

Pahilga said they filed a motion seeking to dismiss the case before the Prosecutor’s Office in Tarlac City but was ignored. “Under the law, it is clearly stated that in cases of agrarian dispute, the Department of Agrarian Reform (DAR) should have jurisdiction.” 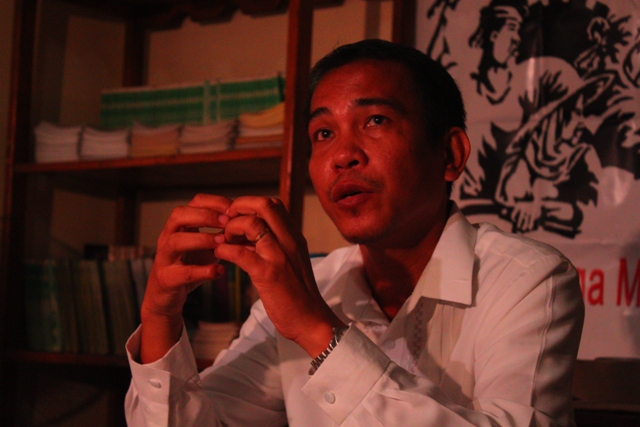 Jobert Pahilga, lawyer of the Hacienda Luisita farm workers, says his clients have done nothing wrong but to cultivate their own land. (Photo by Ronalyn V. Olea / bulatlat.com)

Ambala filed a petition seeking to revoke the conversion order issued by DAR for the 500-hectare land, including the land being claimed by the RCBC.

In their petition, the farm workers said the HLI did not comply with its obligations mandated under the conversion order. Specifically, it did not pursue the proposed development plan that was contained in the application for conversion and instead disposed of the 500 hectares to other Cojuango-owned companies and to RCBC.

“The land remains agricultural,” Bais said. “It is part of the land that should be distributed to us.”

Pahilga, also executive director of Sentro para sa Tunay na Repormang Agraryo (Sentra), said the RCBC is still bound by the terms and conditions of the conversion order issued by DAR. Pahilga said that contrary to the conversion order, there has been no development on the land since 2004. “According to general banking laws, the RCBC must dispose of the land, which must be put under the coverage of agrarian reform,” he said.

Pahilga said the DAR is set to conduct an inspection based on Ambala’s petition this March 26 to 28.

He said he was surprised by the court’s order given that the mediation was terminated by the RCBC only last March 16. Pahilga said the RCBC initially offered to withdraw all the charges and to provide livelihood for the farm workers in exchange for the land. Pahilga said Ambala had yet to consider any amicable settlement when the RCBC terminated the mediation last Friday.

Pahilga said they would file a number of motions before the court today, with the hope that the farm workers would not be imprisoned for long. “We are hoping that they will be released on recognizance,” he said.

Separate charges of robbery, grave coercion and malicious mischief have also been filed by RCBC against 17 other leaders and members of Ambala, including Felix Nacpil Jr., the incumbent Ambala chairman. A hearing is scheduled this morning at the Office of the Prosecutor.

“They have been fighting for their land for so long. It is ironic that they will be sent to jail,” Pahilga said. “In the first place, they should not even be imprisoned. We are confident that the charges will be dismissed,” Pahilga said.

“While the issue is pending in court, a warrant of arrest was released against us. We will face this. We can face this. Let the world see that the landlords and the capitalists only want to strangle the necks of the rightful owners of the land,” Bais said.