MANILA – As the Senate sitting as an impeachment court takes a break for the Lenten season, groups under Gloria Panagutin! Movement renewed its appeal to the public to remain vigilant.
March 22 Thursday will be the last day of the impeachment hearings. The Senate will resume sessions on May 7.

Fr. Joe Dizon, convenor of Gloria Panagutin! meanwhile pointed out that Lenten break is about confession and reflection and therefore the Senator judges, the defense, and prosecution, as well as the people should think about what is good for the country.

“People should not only think about personal or individual conversion because what we need now is social conversion. Our country needs to find truth and justice especially for the victims of nine years of injustice under Gloria Macapagal-Arroyo,” Dizon said in the press conference.

In a statement, the Gloria Panagutin! also added that more than Corona’s questionable statement of assets, liabilities and net worth (SALN), the people should not forget that Corona is being tried for his active role in the botched scheme of Gloria Macapagal-Arroyo to escape criminal liabilities. 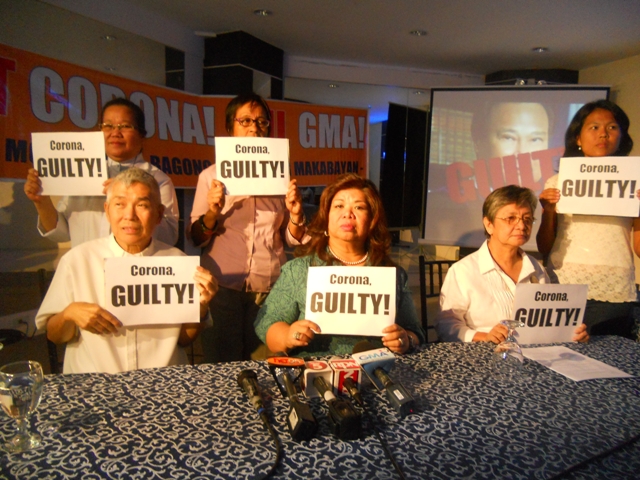 He reiterated his appeal to the Senator judges not to take the impeachment as an opportunity for grandstanding for the coming elections in 2013 and 2016. “We should remember that Corona was appointed as Chief Justice to make him as Arroyo’s gatekeeper so that she will not be accountable for her crimes. It is very important to remove the gatekeeper-the block to attain justice,” he said adding that to make Arroyo accountable Corona should be removed as the Chief Justice of the Supreme Court (SC).

“Corona should have a high moral ground because he is the Chief Justice of the highest court in the land. The SC should be siding with the people on issues and not with those in power,” Pastor Sol Villalor of the United Methodist Church also a convener of Gloria Panagutin! said referring to the SC’s decision regarding the Flight Attendants’ and Stewards’ Association of the Philippines (Fasap) ht

She added that Corona’s questionable properties only prove that he is not serving the interest of the ordinary people who can’t afford to give condominiums as gifts.

Jonas was forcibly abducted in April 28, 2007. He was abducted inside a mall in Quezon City. The vehicle used in the abduction was traced to the 56th IBPA

Meanwhile, political satirist Mae Paner or popularly known as Juana Change also launched her latest video entitled “Ang Totoo” (The Truth). The video is about how the impeachment trial has been burying the truth by drowning the people with highfalutin and legal words that only lawyers and the Senator judges could understand.

Citing Corona’s million-peso condominium and his close ties with the Arroyos, Juana Change said Corona is guilty of betraying the public trust. “It is clear that Corona has betrayed people’s trust. Even the people and ordinary government employee should be a good example and honest. It is only right that we expect more than that because he is the country’s Chief Justice.”

The video was already uploaded in Youtube. Paner also provided copies to the members of media. “The video can be pirated. Please disseminate its content,” she added.

The Gloria Panagutin! vowed to continue educating the public on the crux of Corona’s impeachment trial. “Juana Change’s short video will help remind the people on the main issues enfolding the historic impeachment hearing of the Chief Justice,” it said.

It challenged the prosecutors to prepare an effective rebuttal of Corona’s defense not only on Article 2 of the impeachment complaint, which pertains to the problematic SALNs of Corona. It said Article 7, which relates to the Supreme Court’s temporary restraining order (TRO) that would have allowed Arroyo and her husband to flee the country should be given due attention and preparation as well.