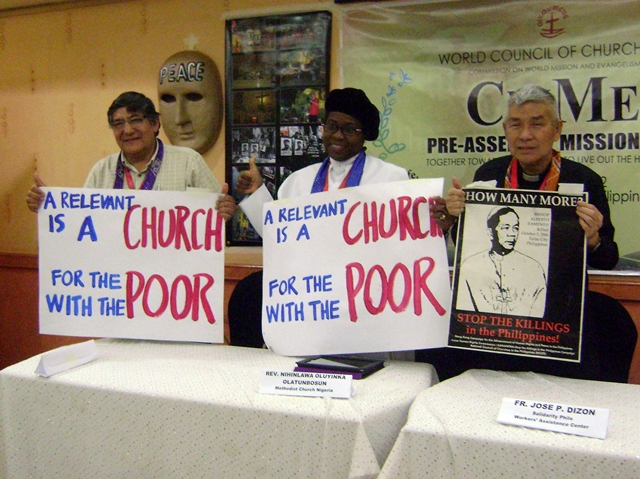 MANILA — Leaders and members of the World Council of Churches’ Commission for World Mission and Evangelism gather in Manila to discuss the role of the church in times of widespread poverty, violence, fear and isolation. The ecumenical gathering hopes to achieve “renewed understanding and practice of mission and evangelism in changing landscapes.”

“The global landscape has changed so we have to launch a new mission statement,” said Bishop Geevarghese Mor Coorilos, moderator of the WCC-CWME. The WCC is a worldwide fellowship of 349 churches representing over 560 million Christians. The gathering in Manila is held as a pre-assembly to the 2013 WCC assembly in Busan, South Korea, which is likely to be attended by 1,000 Church leaders.

“This affirmation of mission is timely and critical. Much had changed in the world in the past three decades since the first Statement on Mission and Evangelism in 1961. In a globalized world, many problems have been globalized too, such as economic crisis, displacement, plunder and poverty,” said Rev. Fr. Rex Reyes Jr., general secretary of the National Council of Churches, a WCC member. 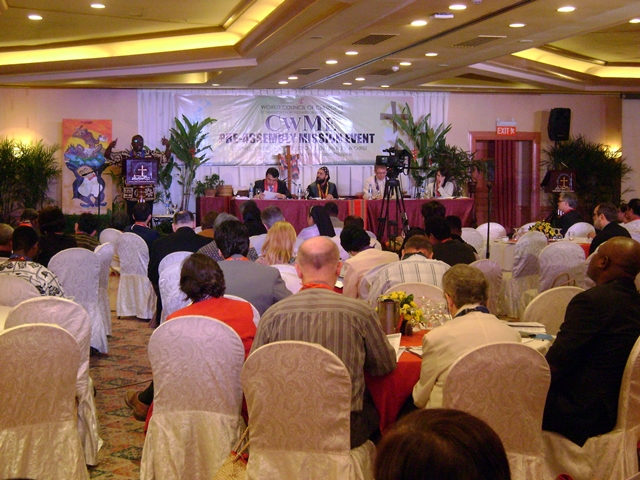 Reyes added that the mission of the church will be for and with the poor. “Only through this will the church role be truly prophetic.”

Conditions in the Philippines

In his welcome remarks, Reyes cited the continuing killings, enforced disappearances and harassments under the present administration. There are recent reports of a father and his two sons in Eastern Visayas who have been missing since March 4. There was another report on March 11, when a blast from a grenade launcher, later traced to a military detachment 200 meters away, killed a four-year-old girl and wounded her three-year-old sister. An indigenous peoples’ leader and an advocate of a large-scale mining was also killed, reportedly by a paramilitary group.

Reyes said that while other countries busy themselves with talks on food security, many others are being denied food. “It is strange for me to hear sisters and brothers in the north discussing about eating properly. In my context, we are talking about hunger. How has this sad state of affairs come about in a continent that could feed the world?”

“The proclamation of God’s peace and justice strikes at the core of Christian mission in Philippines and most certainly in many parts of the world. Land to those who produce food, just and decent wages and the repeal of repressive laws against principled dissent do inform mission,” Reyes said.

On top of the already poor conditions in the country, the present administration has continued to allow foreign intervention in the country. President Benigno S. Aquino III has recently welcomed more U.S. troops in the Philippines for the joint military exercises.

Reyes said it is “odd” that while the natural resources of the country are coveted by rich countries through large scale mining, over 4,000 Filipinos are leaving the country daily to find greener pasture abroad. “Globalization has commodified human and community relations. Migration has become more of a slavery than a right with unspeakable consequences on families and communities.” 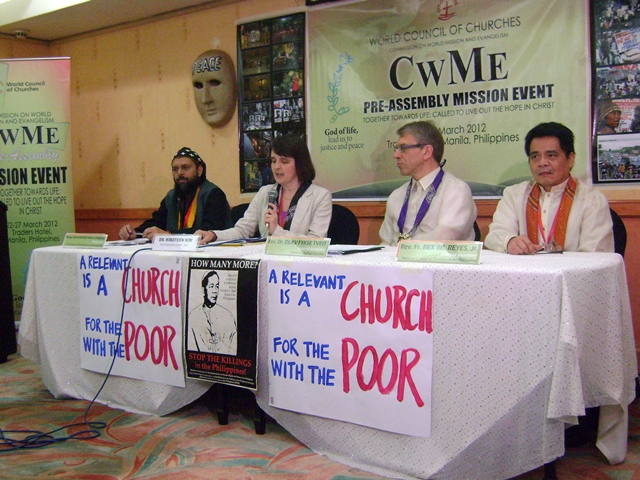 Role of the church

In a press conference, Reyes said Philippine churches have struggled with what it means to be a church in these difficult times.

Fr. Joe Dizon of the Workers’ Assistance Center said the people are experiencing dehumanizing poverty despite the promised changes of the president during his campaign. “But the oppression continues,” Fr. Dizon said, adding that former president Gloria Macapagal Arroyo has still not been called to account for her regimes’ many sins to the Filipino people, and today there are continuing human rights abuses and extrajudicial killings.

He said that with oppression, there is growing resistance. The role of the church, he said, is to “walk with the people in their search for a more humane life. The dream of our God is an abundant world.”

Dizon added that the church must be a church of the oppressed. “There is no other option but to be with them.”

“Before, we were only concerned about the church but not with what is happening around us. But we were roused to the fact that we cannot live a life that ignores poverty, racism, among others. So now, we are trying to live up to the Gospel,” Tito Paredes of the Centro Evengelico de Misologia Andimo Amazonica.

Dr. Kirsteen Kim, vice moderator of the WCC-CWME, said the church must be based on the needs of the people. “Evangelism from the margins, not to the margins,” she said.

The thrust of the mission, said Rev. Jooseop Keum, secretary of the WCC-CWME, is a future that is “no longer moving from the center of privileged societies outward to the margins and marginalized but a mission that is coming from the marginalized.”