Call centers can and should increase employees’ wages – KMU

“Since the entry of the call center industry into the country in the early 2000s, there is a downward trend in the salaries being received by the majority of call center agents.”

MANILA – Once touted as providing high salaries for new graduates, the call center industry has been controlling the increases in the salaries that its companies offer. Now, it is even rejecting calls for a P125 ($2.92) across-the-board daily wage hike nationwide.

Although call center employees are reputed to be receiving higher than average starting wages in the country, researches revealed that compared to employees in other countries doing the same jobs, and compared to the profits of these companies, their wages are actually low. Also, in recent years, the call center industry in the Philippines, led by CCAP, has endeavored to slow down the rate of wage increases here, so that the starting wages today in call centers are lower than it had been five or six years ago. 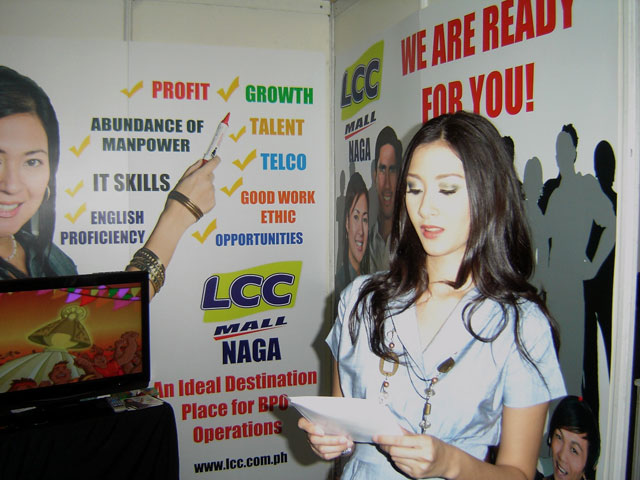 A Filipina model for call centers tries to attract investors with assurances of high profits, talented labor, in one of CCAP tradeshows. (File Photo by Marya Salamat / bulatlat.com)

The Call Center Association of the Philippines (CCAP) groups together the majority of call center employers in the country. It prides itself for advancing the said industry. Since the so-called sunshine phase of the supposed industry in the beginning of 2000s, CCAP has actively lobbied the government for various incentives for its local and multinational players. These include tax holidays, assistance in training “near-hires” (TESDA trainings), according them the privileges enjoyed by companies in special economic zones even if they hold office outside of regular economic zones, granting exemption to call centers in observing certain special holidays and even promises of improving English education in the country or including call center training in the education curriculum.

The government has also both guided and aided the call center industry in going to the so-called “next wave” cities, or in locating outside of Metro Manila where wages are lower.

As an association CCAP has also encouraged its members to stop its early practice of “poaching” talents by offering higher pay; instead, it has united itself in decelerating the rate of wage hikes being granted to local workers, or “talents” as the industry calls them, even if the industry players themselves admitted that wages here are lower than abroad. The industry considers the relatively lower wages here, the westernized culture and the high quality of the labor force, as the come-on to investors and outsourcing contracts.

The call center industry, under the label of business process outsourcing, has been enjoying the support of national and local government for its promised investments and job generation. Under Arroyo and now under the Aquino government, it is listed at the top five “competitive industries and services key areas.”

But a decade since it debuted big and with high expectations in the Philippines, it now employs only 300,452 people, or just one percent of all employed, according to independent think-tank Ibon Foundation in an economic briefing early this year.

The industry has also not evolved into the higher value-added types of outsourcing services as first targeted. Even CCAP noted that majority of business process outsourcing jobs in the Philippines is still in the voice or call center services, and not in higher value services such as programming.

CCAP has been annually holding conferences where, especially in the past years, it has almost consistently united to arrest the early years’ “cost-creep,” as Mar Roxas called its rising wages (at the start) as a result of the then fierce competition for trained “talents.” Citing global competition and fear of pricing themselves out of the market, CCAP has urged its members to bring down the rate of wage increases of its employees or “talents.”

According to the KMU, last January, the Bureau of Local Employment in the United States said that the salary of entry-level call center employees in the US amounts to P70,000 to P75,000 ($1,752) – a far cry from the P15,000 ($350) being received by their counterparts in the country. KMU also quoted the BLE as saying that the Business Process Outsourcing sector raked in $11-billion in profits from the Philippines in 2010.

“Call center agents are working hard and bringing in huge profits for call center companies,” said Elmer “Bong” Labog, KMU chairperson. He shared that based on the reports to them by call center employees, “Call centers are experts in micromanagement that they can make their employees work nonstop; they impose strict rules on employees in, say, maximizing their time at work and meeting over-the-top quotas.”

A research by non-government EILER Inc in 2008 also found out that because of very high output quotas many call center agents are being forced to shorten or even forgo meal breaks and trips to the comfort room.

KMU said industry insiders have told them how call center salaries have stagnated over the years and are in general decline. “Since the entry of the call center industry into the country in the early 2000s, there is a downward trend in the salaries being received by the majority of call center agents. There is a growing sentiment among call center employees that the salary they are receiving is comparatively smaller than what they ought to be receiving,” Labog said.

He also reminded CCAP to “recognize the sacrifices, such as lost family time, that call center agents are forced to make to earn a living. They are also exposed to a lot of health problems because of the nature of their work.”

The KMU pointed to how the government of Pres. Benigno “Noynoy” Aquino III is “using the micro, small, and medium enterprises and the call center companies to oppose calls for a significant wage hike.”

The labor center accuses the Aquino government of orchestrating the rejection of calls for a significant wage hike by various groups. “Aquino is using both small and big capitalists to try to cover its failure in providing a convincing reason against the calls for a wage hike,” Labog said.

The independent economic think-tank Ibon Philippines said that the P125 wage hike, if granted across-the-board this year, would take only 12-percent of the employers’ total profits. It said the wage hike would also not necessarily lead to inflation, if the government would prevent the companies from passing the 12-percent cut in their profits to their prices.