You Are Here: Home → 2012 → April → 13 → Child rights groups outraged over disparaging US military article on the Philippines

First was the comment of US Ambassador Harry Thomas that a big percentage of tourists go to the Philippines for sex tourism, now its an article in a US Marine Corps publication which describes the country as being known for its “raunchy party atmosphere…where alcohol and scantily clad women have attracted Marines and sailors over the years.”

Manila – A Davao-based children’s rights advocacy group is outraged over an article in a United States Marines publication disparaging Filipino women and the Philippines itself.

Kabiba Alliance for Children’s Concerns Inc. called attention to the article which was referred to by a story posted on ABS-CBN by its ABS-CBN North American Bureau. In the story written by correspondent Rodney Jaleco, it was said that US Marines prefer being designated to the Philippines for its “raunchy party atmosphere…where alcohol and scantily clad women have attracted Marines and sailors over the years.”

The Marine Corps Times article, which Jaleco cited, was written by staff writer Gidget Fuentes and was posted online April 8. In it, Fuentes said that a “new generation of Marines and sailors will get the chance to experience the Philippines as previous generations have.”

Writer Fuentes noted in her report that the primary unit deployed in the Philippines is the Joint Special Operations Task Force-Philippines, a “clandestine unit” that assists the Philippine military in counterterrorism and humanitarian missions in Mindanao. But that would soon change as more troops, ships and aircraft are expected to visit the country.

“Marines and sailors who travel there experience a tropical climate, lush with jungles, mountains and coastal lowlands that are home to mangroves and swamps,” Fuentes said. But she added, “The Philippines also are known for their raunchy party atmosphere. Places such as Olongapo and Angeles City feature notorious red-light districts where alcohol and scantily clad women have attracted many Marines and sailors over the years.”

She quoted a retired sergeant-major named Daved Francisco“whose off-duty experiences in the Philippines came during liberty calls.”
“Whatever you heard was probably true,” Fuentes quoted the retired officer.

“We don’t want another Nicole,” she went on to say, referring to the controversial 2005 Subic rape case. It will be remembered that the clamor to review the VFA reached fever pitch after Marine Lance Corporal Daniel Smith was accused of raping a young Filipina in Subic, Olongapo in 2005. Smith was convicted in 2006, but the conviction was later overturned by an appeals court. During the hearings, the US insisted that Smith be jailed at the US Embassy instead of a regular Philippine jail, a position supported by the Supreme Court.

Caragao said the rape case that hit international headlines was in clear violation of the Philippine Law, Republic Act No. 9262, An Act Defining Violence against Women and Children.

“We call on the government to review and repeal the VFA which has given quasi legal protection against US military personnel who have abused, exploited and raped Filipino women and children,” Caragao said.

She also said the Philippine government is signatory to the United Nation Convention on the Rights of the Child (UNCRC), and is accountable to uphold the rights of children to protection from any harm. Despite the UNCRC, children still suffer from all forms of violations.

More US Marines in the Philippines

Fuentes’ article also have insight on how US military personnel and officials view US military relations withe Philippines. The Aquino government has given its enthusiastic agreement to the US government’s plans to expand its military presence in the Philippines as a move to oppose China’s supposed increasing dominance in the Southeast Asian region. Assistant US Marines Corps Gen. Joseph Dunfor has previously announced that hundreds of Marines will be deployed to the to the Philippines as part of the American military pivot in the Asia-Pacific region.

In the meantime, US State Secretary Hillary Clinton and Defense Secretary Leon Panetta are scheduled to meet their Philippine counterparts in Washington D.C. later this April to finalize the military arrangements. These are expected to revolve around the 60-year-old US-Philippine Mutual Defense Treaty and the VFA.

In her article, Fuentes said that last March 29 at the Marine Corps Association Ground Logistics Awards dinner in Arlington, Va., Assistant Commandant Gen. Joseph Dunford said that in the coming years hundreds of Marines are expected to regularly deploy to the Philippines as part of the service’s growing focus on the Pacific. 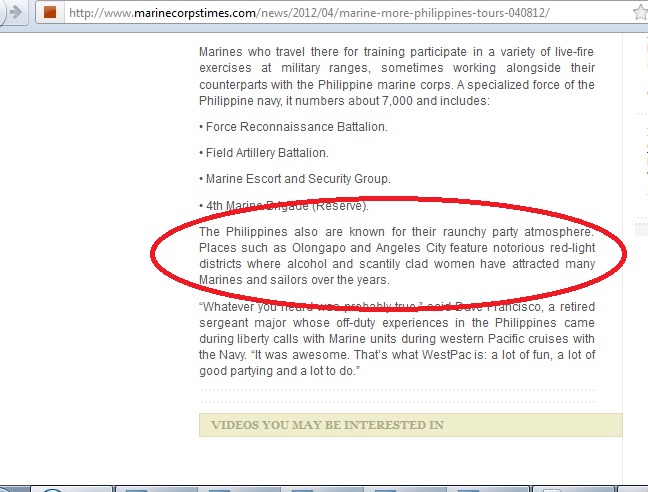 Fuentes said that although the details of this partnership have been slow to emerge, ” it would appear that plans call for temporary deployments, not increased permanent basing.”

She also quoted Philippine Department of Foreign Affairs Secretary Albert Reyes as saying that Filipinos “would like the Americans to come more often” in an interview with Reuters.

“Let’s have these joint training exercises more frequently and on a bigger scale — as many times as we can, in different places if we can,” Reyes said. The official was referring to the annual exercise Balikatan, which runs April 16-27.

Fuentes also said that beyond Balikatan, the Aquino administration will support greater US military presence in the region to oppose growing Chinese military influence. She also said that US President Obama is scheduled to meet with Aquino on April 30, “presumably to discuss plans for greater military cooperation and the potential sale of F-16 fighter jets and a naval vessel.”

Fuentes also wrote in her article that terrorist and transnational threats plague the Philippines.

“Its military is battling ethnic rebels and insurgents in the southern islands, as well as the Abu Sayyaf terror network, an Islamist separatist movement linked to al-Qaida. Militants have carried out bombings, kidnappings and assassinations since the 1990s,” she said.

She also noted that US Marines who travel to the Philippines for training participate “sometimes work alongside their counterparts with the Philippine marine corps.”