According to Anakbayan, one youth or student leader is being victimized every week.

MANILA – Progressive youth group Anakbayan condemned the harassment of two students from the University of the Philippines–Manila by suspected military agents. Anakbayan members Cleve Arguelles, outgoing vice-chairperson of UP Manila University Student Council, and Nikki Gamara, were reportedly subjected to surveillance and harassment last April 2 and 3.

“We condemn the Armed Forces of the Philippines and the Aquino administration for this latest attack on our members” Anakbayan national chairperson Vencer Crisostomo said.

According to the fact sheet, on April 2 Monday at around 7:00 p.m., an unidentified woman went to Arguelles’ residence saying that she was lost and was looking for someone named “Nikki” but was unable to give a surname. Fellow UP Manila student Nikki Gamara was in the house visiting Arguelles at that time.

Gamara and Arguelles became suspicious because the house is hidden inside a compound, and is unseen by passersby in the main street. 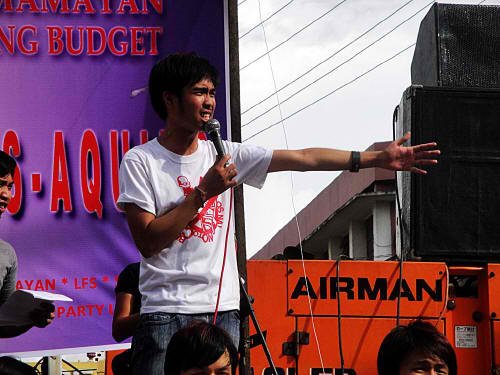 On April 3, Tuesday at around 7:00 p.m., Arguelles and Gamara received a report that Gamara’s father, Renante Gamara of the partylist group Bayan Muna, together with Santiago Balleta, was arrested by the police and military in Las Piñas earlier that day. Balleta is the father of Jane Balleta of the Morong 43, a group of health workers who were arrested and detained in Feb. 6, 2010.

Arguelles then accompanied Gamara to her family’s house at around 11:00 p.m. of the same day . When Arguelles was going home, after around 30 minutes of commuting, he noticed that a black Toyota Corolla was following him. He then transferred to other jeeps twice but the car continued to tail him. Arguelles went inside a fastfood restaurant.

After 15 minutes, a dark-skinned man wearing a black shirt alighted from the car and entered the fastfood restaurant. He sat beside Arguelles and immediately asked him to join him because he was going to Paco, Manila where the unidentified man claimed “Nikki lives.”
The man repeatedly asked Arguelles for his residence address and his connection with “Nikki.” The man also asked him if he has a gun. Arguelles refused to give his address and denied any connection to the “Nikki” the man was referring to. The man then returned to his car and left. Arguelles also noticed that the man had a handgun.

“Who else would have the motive to attack Gamara and Arguelles aside from the very same people who framed-up and arrested her father? Who else has been positively identified in other cases of harassment against other youth leaders earlier this year? Who else has been charged by the courts of abducting one of our members back in 2006?” Crisostomo asked, referring to missing UP student Sherlyn Cadapan who is a member of the group.

Sherlyn and Karen Empeño were abducted in Hagonoy, Bulacan by soldiers belonging to the 71st IB of the 7th Infantry Division, which was then commanded by Major Gen. Jovito Palparan. Both Sherlyn and Karen are still missing as of today.

Crisostomo also cited cases of harassment on the youth such as the Porac 3 and Calatagan 8, students from the UP Diliman and Los Baños campuses who were also harassed by individuals positively identified as military agents while conducting various academic activities in Porac, Pampanga and Calatagan, Batangas, respectively.

Meanwhile, UP Student Regent Krissy Conti is demanding the reconvening of the joint monitoring group (JMG) which was created in 1989 which, according to Conti delineates the authority of the Department of National Defense (DND) and the UP administration over UP campuses and students.

Conti said that in documents, the DND and UP have agreed to; disallow establishment of military and police detachments inside campuses; ban operations and deployment of military, police or Citizens Armed Forces Geographical Unit or CAFGU forces; require proper notification in case of arrest, detention or custodial investigation of any UP student, faculty, or personnel.

“UP has had no choice but to place itself squarely on the other side of the fence. This is to protect all UP students, who at one time or another, are required to go out into the communities and serve. The systematic vilification and persecution of our students threatens our lives and liberties,” Conti said in a letter sent by the UP Student Regent.

“UP students, past and present, have always been instrumental in exposing and, most times ,opposing what is wrong with the system. Don’t persecute us improperly and unlawfully when we do something about it,” Conti said.