MANILA — Government employees held a protest action against Balikatan, a joint military exercises between the United States and the Armed Forces of the Philippines. Some 4,000 U.S. troops are set to arrive today, April 16, 2012.

“Government employees as public servants have sworn and are duty-bound to uphold and protect the nation’s sovereignty and patrimony. We join the Filipino people in opposing Balikatan and Aquino government’s Oplan Bayanihan,” Ferdinand Gaite, national president of the Confederation for Unity, Recognition and Advancement of Government Employees, a state workers union, said.

Balikatan, which literally means “shoulder-to-shoulder,” is an annual joint military exercise being conducted by Philippine and U.S. Armed Forces. These exercises are being held by virtue of the Mutual Defense Treaty (MDT) and the Visiting Forces Agreement (VFA). Despite the strong clamor from progressive groups for the junking of the VFA, as well as the MDT, President Benigno “Noynoy” C. Aquino III has not acted on it. This year, in fact, is the 28th time that the Balikatan would be held in the Philippines.

During the protest action on April 15, 2012, protesters held placards that showed the names of union leaders of Courage who were killed under the counterinsurgency program of the Philippine government. 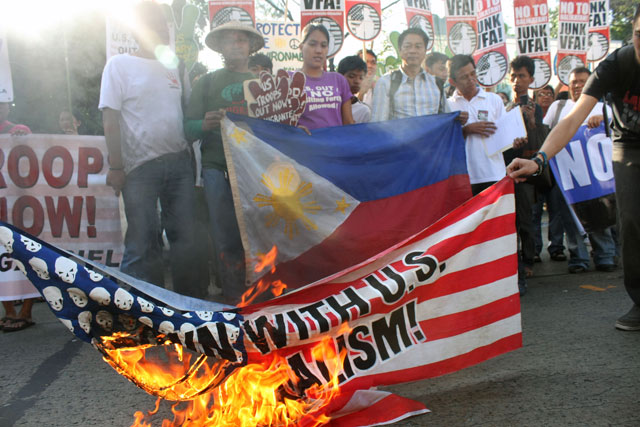 Various groups today (April 16, 2012) began a protest caravan from Metro Manila to BASA Airbase in Floridablanca City, and to Clark Airbase in Angeles City, Pampanga. They are protesting the more than 4,700 new American troops to the country.(Photos by Jhun Dantes / bulatlat.com) 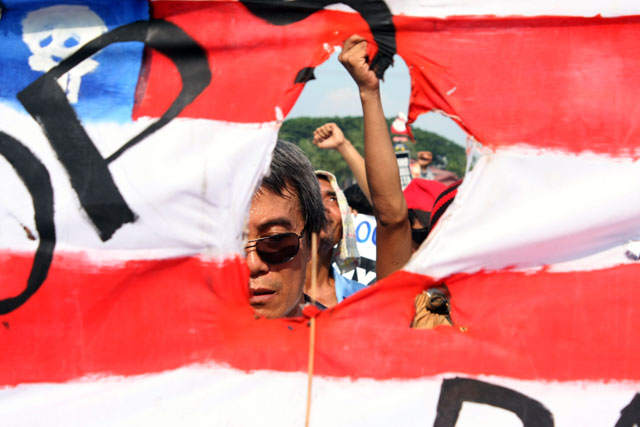 Caloy Rodriguez of Calamba Water District, Pax Diaz of Department of Agrarian Reform-Leyte, Albert Terredano of DAR-Abra, Prof. Jose Maria Cui of University of Eastern Samar, Sammy Dote of Samar Provincial Capitol and Doming Luna of National Food Authority-Samar are among the leaders of Courage who are victims of extrajudicial killings.

“(We) would like to remind the public that intensified U.S. military intervention on the internal affairs of the country could mean more victims of extrajudicial killings, mainly those wrongly considered as ‘terrorists’ and enemies of the state,” Gaite said in a statement.

Gaite also reminded the public that no justice has been served for the likes of “Nicole.”

Nicole, not her real name was raped by Lance Corporal Daniel Smith inside a van at the Subic Bay Freeport on November 1, 2005. Three more U.S. soldiers, Lance Corporals Dominic Duplantis and Keith Silkwood and Staff Sergeant Chad Carpentier, reportedly cheered as Smith raped Nicole. The four soldiers were part of the contingent of the U.S. Marines participating in the Balikatan exercises at that time.

The Makati Regional Trial Court found Smith guilty of raping Nicole and sentenced him to life imprisonment on December 4, 2006. In less than a month, Smith was transferred from the Makati City Jail to the U.S. Embassy, with both Philippine and U.S. governments citing the Visiting Forces Agreement as basis for the transfer.

On February 2009, the Supreme Court ordered the transfer of Smith to Philippine custody. However, before the transfer was to be effected, Smith was acquitted by the Court of Appeals on April 23, 2009 a little more than a month after Nicole issued an affidavit raising doubts about the rape.

Women’s groups believe that Nicole succumbed to pressure from the US and Philippine governments.

“There are many similar cases of Nicole. But they chose not to go public. The violence against these women has been committed. Yet justice remain elusive,” Gaite said during the protest action.

In a GMAnews report, U.S. military noted that there is an increase in cases of sexual assault involving its soldiers. In their 2,439 unrestricted report, meaning there are public documents available, 31 percent were charges of rape, 30 percent were charges of aggravated sexual assault and 25 percent allegations of wrongful sexual contact. The remaining allegations involved a range of other sexual crimes.

“It is for this reason that we must never forget the victims of extrajudicial and political killings,” Gaite said, “We must not be blinded by what is truly underneath the exercises, U.S. intervention in our nation’s affairs to promote their economic, political and military agenda nit just in the Philippines but also in the Asia Pacific Region.”