MANILA — Just as the remains of Arnel Leonor was laid down in his grave, the residents and supporters of the struggle in Silverio compound chanted, “Justice for Arnel.”

“As Leonor is laid to rest today, we call for justice for the victims of the brutality of this state. We promise no let up in this fight. The Filipino masses shall soon be able to end this oppressive government and its anti-poor and fascist policies,” Gloria Arellano, secretary general of Kadamay, said.

Leonor was killed during the violent demolition of homes in Silverio compound in Paranaque City. He was merely watching the barricade from afar, near the center island of Sucat road, when a bullet pierced his head. Television news reports show that the police were firing at the residents but official investigation now claims that the person who killed Leonor came from the ranks of the protesters. The Leonor family, however, are not convinced.

As the remains of Leonor was being carried outside Silverio compound, residents showered him with white confetti. They clapped their hands and raised clenched fists as Leonor passed by. Most of them were wearing white shirts printed with, “Justice for Arnel Leonor.” 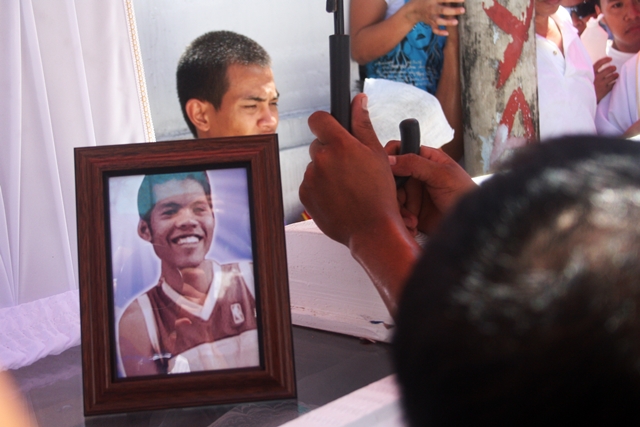 A man was carrying a big placard that read, “Salute to heroes of Silverio.”

Glenda Leonor, mother of the Arnel, clutched in her heart a photo of her son and plaque from youth group Anakbayan, who earlier paid him a tribute. 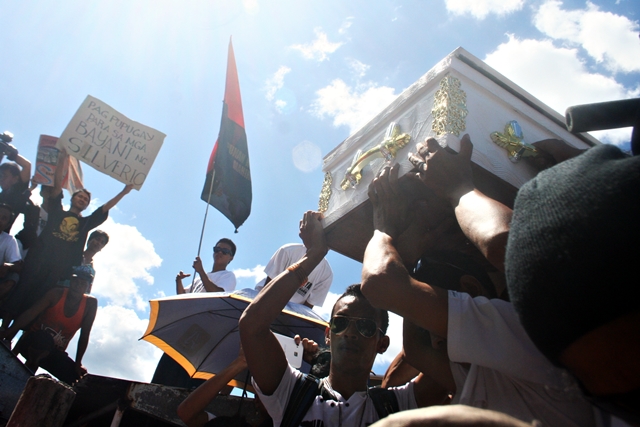 “Millions of Filipinos nationwide mourn over the loss of 19-year old Arnel Leonor,” Arellano said, adding that members of Kadamay and other urban groups nationwide held a solidarity and protest action in memory of the sacrifice that Leonor had made.

Residents of Liwanag in Barangay Old Balara also staged a candle lighting protest action in front of Diliman Preparatory School while members of Gabriela from Barangay Batasan staged a noise barrage in Batoda terminal from 6:00 to 7:00 p.m. Residents from Corazon de Jesus, for its part, also held a protest action in Pinaglabanan Shrine. 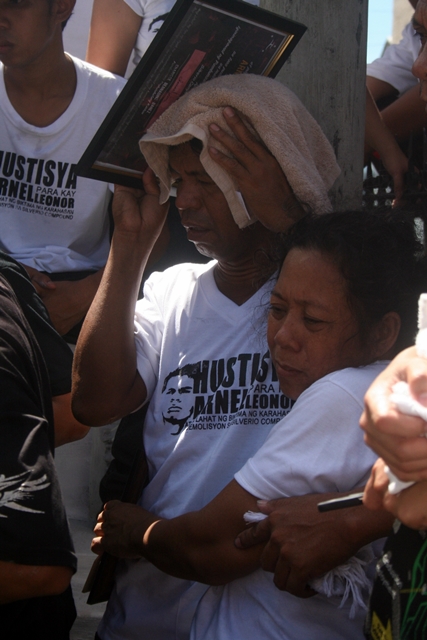 In a statement, the group said they “condemn in the strongest terms the state fascism demonstrated by police forces especially elements of SWAT who aimed and fired their rifles at barricading residents, which led to the slaying of Leonor.”

While President Benigno “Noynoy” C. Aquino III has not yet said a single word on the killing of Leonor, urban poor groups said that he is an “enemy of the urban poor.”

“As if hunger and poverty are not enough, the urban poor are now being killed by government forces,” Arellano said. She added that the killing of Leonor shows the “callousness” of the Aquino administration toward the welfare of the urban poor in order to promote the interests of big businesses.

Kadamay also reminded the public that Leonor is not the first martyr among the ranks of the urban poor under the Aquino administration. “Antonio Homo, Kadamay-Navotas leader from Kadiwa Compound, Rommel Fortades and Soliman Gomez, Bayan Muna leaders from Pangarap Village and Simeon Bayugubog, Kadamay leader from Montalban top the list of victims of Aquino’s brutal demolition rampage,” Arellano said.