The group burned a reproduction of the ADB logo, but instead of the original definition, the acronym was spelled out as “Anti-Development Bank,”, and the slogan written under it was “Promoting poverty in Asia and the Pacific.

Bayan criticized the Benigno Aquino III administration for the supposed red carpet treatment it is giving to the ADB assembly. The group’s secretary-general, Renato Reyes, said the ADB is “behind many anti-poor and anti-development policies that impoverish the people and bankrupt the domestic economy.”

“The ADB is the main creditor and proponent of programs that facilitate the sell-off of Philippine patrimony to profit-oriented private business, including foreign corporations,” he said.

Bayan also blamed the ADB for being the brains behind the Electric Power Industry Reform Act (EPIRA), which, the group said, is the reason why the Philippines has the most expensive electricity rates in Asia. Even Mindanao, which is also being plagued by rotating brownouts due to lack of energy supply, has higher power rates than Hong Kong, Seoul, Kuala Lumpur, Bangkok and other major Asian cities. Electricity rates in the country have doubled since EPIRA was implemented. 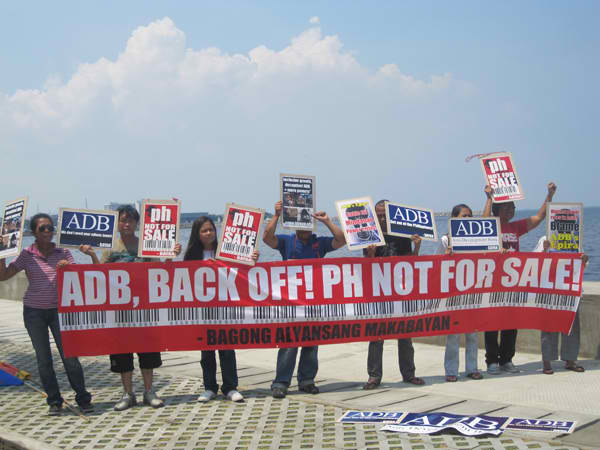 “The ADB is the main proponent of Epira and the neoliberal restructuring of the country’s power sector in the past two decades. It bankrolled the design, legislation, and implementation of Epira, which it funded through debilitating foreign debt of about $1.6 billion in the past 14 years. Aside from power, ADB has also funded the privatization of the country’s water services, irrigation systems, dams, and even the commercialization of the National Food Authority (NFA). These reforms have resulted in skyrocketing cost of living and further hampered the poor Filipinos’ access to basic social and economic services,” Reyes said.

In the meantime, Bayan spokesman Arnold Padilla said the loans used to finance the government’s supposed economic reform programs have also been draining the country’s resources and siphoning off funds that should be used for public education, mass housing, health services, social security, land reform, and other social services.

“The ADB is the single biggest foreign creditor of the Philippines, which as of 2011, owes the bank some $5.84 billion. More than half of the country’s multilateral debt comes from the ADB. For 2012, the Aquino administration is willing to spend P738.6 billion ($171.86 million) for debt servicing while the budget for social services is pegged at only P575.8 billion ($13.65 million),” he pointed out.

The Manila meeting is supposed to center on so-called “inclusive growth.” Bayan, however, said the impact of ADB’s policies and loans has been excluding and marginalizing the poor while enabling big corporations to rake in profits.

For profit, not public progress

For its part, the research group IBON Foundation Inc. and the nationwide aid network AidWatch Philippines, said the ADB has not only increased the Philippines’ debt dependency, but has also made these loans a leverage to implement damaging economic policies like trade liberalization and privatization of social and public services.

Apart from the Epira, IBON said, the ADB also promotes the privatization of the health sector, providing in 2004 a $200-million loan for the Health Sector Development Program (HSDP) to systematically advance and accelerate the privatization and commercialization of hospitals and the health care system in the country.

The ADB has also provided loans to and pushed for the privatization of the water sector, and, in 2001, declared in its water policy that government should cease providing water service to the public. It has also pushed for the privatization of dams, irrigation, as well as the National Food Authority (NFA). All these have resulted in higher user fees and diminished access to social services. Meanwhile, government spending on social services is likewise repressed to free up public resources for debt service.

In the meantime, IBON also said that to cover up for the damage that its policies and operations have caused, the ADB funded part of the administration’s conditional cash transfer program (CCT) despite lack of comprehensive studies and assessments on its effectiveness.

“This is aside from its resulting in a heavier debt burden for Filipinos who will repay the ADB an estimated $508.5 million in 25 years. Despite the resulting destructive effects on the economy, the Aquino government continues to support ADB’s programs and its corporate and private-sector driven agenda,” it said.

According to IBON, the government’s economic managers should bear in mind that the ADB programs are designed not to ensure “inclusive growth” but mainly to support private sector profits and the profits of the ADB itself.

It also said the government should look into the impact of the CCT program, which is a $400 million-loan from the ADB. The program, criticized as mainly a dole-out, was approved and funded despite lack of comprehensive studies on poverty alleviation.