Progressive organizations, business and transport leaders are dismayed at the fact that the government, up to now, has no system to monitor or explain how the oil companies profit and how much. Neither does it have a benchmark for defining excessive profits and penalties for such.

MANILA – “We’re looking for a good monitoring method; I think that by now you should have that already. What I can’t understand is why there is still no clear monitoring system till now,” Claire dela Fuente, former singer and now leader of a bus operators’ association called IMBOA, remarked during a public consultation of the Independent Oil Price Review Committee. It is the second public consultation held by the committee, who promised to do this monthly until it submitted its report by July.

Dela Fuente had listened to the consultation at length before speaking. “I have lost interest in attending meetings like this,” she shared. She had been to many such meetings and consultations before, and she asked, “Until now, where is the system?” Dela Fuente said that even in their transport business, which is a lot smaller than the business of refining and distributing oil, they have a monitoring system that tells them their cost and profit projection.

“We’re talking of the oil companies’ accumulation of profits,” she said. But after many consultations like last Monday, she said, the government still cannot monitor or explain how the oil companies profit and how much, really. 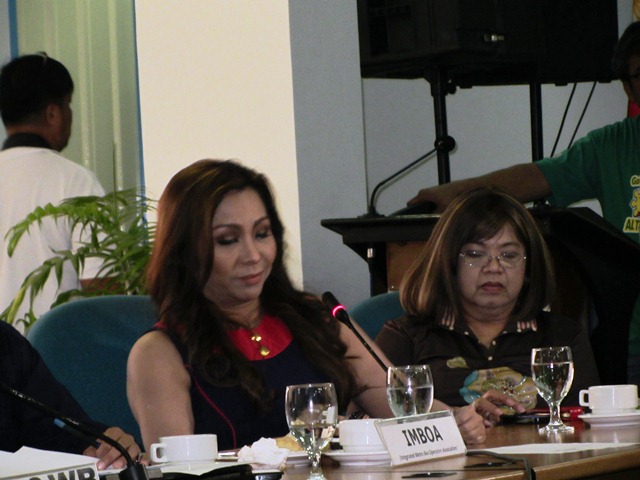 Worse, during the public consultation, it transpired that the Philippines do not actually have a (legal) definition of excessive profit. In the law, dela Fuente pointed out, “there is no penalty for excessive profits, if there is such given its lack of definition in law.” This means that even if the ongoing review does find out that there is excessive profit taking on the part of the oil companies, it would likely be useless and toothless.

The oil price review committee is supposed to determine if the oil companies’ profits are excessive or not. Even if the committee said, last Monday, that they are already 60 to 70-percent through and they could submit their “scientific report” on July, they still would not reveal the trend of their findings, citing the terms of reference of the review. They are also set to meet with oil companies to get their side, along with other data on oil company’s “financials.”

In last Monday’s consultation by the Independent Oil Price Review Committee held at the Department of Energy, leaders of civil society and business received little to no reassurance that the much complained about oil overpricing, oil deregulation law or government neglect in developing local energy sources may be finally and decisively addressed.

The thrust of the review, said Dr. Rene Azurin, member of the review committee, “is not to determine whether prices are fair or not but if it’s fairly set, if it’s accurately set compared to world market, (or) whether local prices reflect international prices.”

This delineation followed a lengthy sharing of leaders from business and bus transport operators who, like Dela Fuente, had expressed disappointment with government inaction on oil prices and oil overpricing.

It is up to the court to decide on the issue of fairness, said lawyer Vigor Mendoza, another member of the review committee who is supposed to represent the transport sector. A lawyer by profession, Mendoza is a former representative of transport group 1-UTAK partylist; he is reportedly also a legal counsel of the Cojuangco-Aquino’s Hacienda Luisita Inc.

Because the review committee has no (legal) basis for determining what is fair or not in pricing, Mendoza said, they “will try to approximate what is fair pricing to all.” 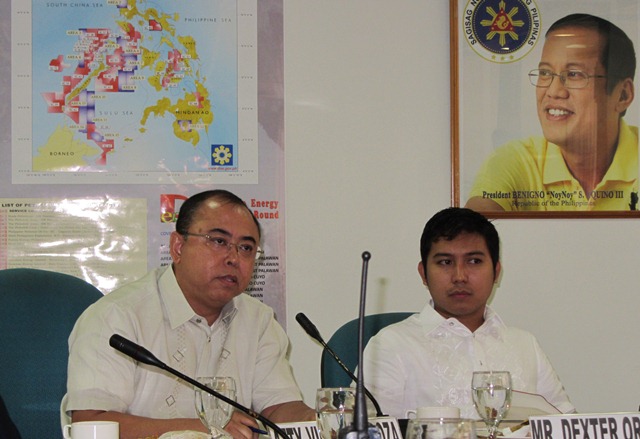 The review committee anticipates disagreement of critics to their likely conclusions. Although holding “public consultations,” the committee, based on its head’s pronouncements, is not after unanimity. The committee head, Dr. Benjamin Diokno, said that they have agreed “We can spend all day and night, we will not agree on values.” So, he said they would just give a range of values.

In another instance, Diokno expressly said “there is no unanimity in this group,” when he replied to Bayan Muna Partylist Teddy Casiño’s worries that the oil companies may come off as “losing” in the review methods to be employed by the review committee. The review committee has set as benchmark for determining the rate of return on investment those of the utility companies such as the electric companies and telecommunication companies.

Casiño said these companies have been raking it in – the Philippines already has the most expensive electricity, in fact. As such, Casiño said it is worrying that the oil price review committee would take them as benchmark.

But Diokno is apparently not worried. Instead, he consistently raised the issue of fairness to oil companies, whom he said should be allowed a higher rate of return on investment given the risks of investing in oil. Diokno also said that in fairness to oil companies, the review committee would be giving it a chance to explain its side in the matter of their pricing. They are set to meet with representatives of oil companies, big and independent players, next week.

Diokno reported at the start of the consultation that they have agreed to follow three methods in their review. These include (1) a “regression analysis” of oil pricing “to determine whether evidences exist if there are possible asymmetry with changes in oil prices abroad,” (2) studying the project financial model of an oil refinery and oil market, “to determine if the rate of return on investment is within the prescribed rates of returns for the industry, much like those in utilities,” and (3) studying the oil price, oil pump mechanism to determine model of pump prices, and the “gross margin” of the oil companies’ pricing and operations.

Diokno said they are “on track” to finish their report, as targeted, on July. Their regression analysis will cover the period before and after oil deregulation, or from 1994 to 2012.
For the three methods to be employed in the oil price review, Diokno said the Energy Department and the Bureau of Customs would help them get documents and the oil companies themselves would supply them with data. But if it is just factor prices the review committee wants to gather, Mr Antonio Ver, president of H & WB Corporation, which does business in the “energy frontier,” said all of it can be gleaned from the supply contracts. He said the problem begins once the oil products start to leave for distribution, and the “manipulations” happen.

“But when we go there, we’re told business has a right to a return on investment. Can we markup prices up to 35-percent?” he asked. He added that “It’s really so painful that up to now, we still can’t pinpoint how much percentage we can allow for markups and return on investments.

Sixty to seventy percent on to its ongoing oil price review, the committee has given indications during its public consultations that it is not opposed to oil deregulation. On the contrary, its members such as Victor Abola, consider it a success. To suggestions that government ought to buy back Petron and go back to oil industry regulation, Diokno always replies with questions like: “Do you have that high confidence in the government?” 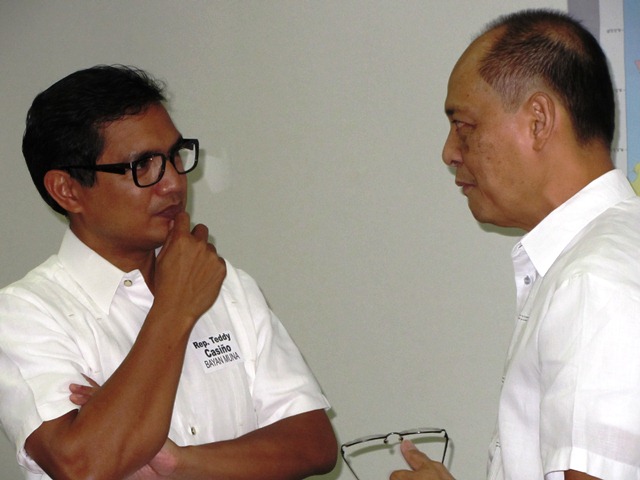 The committee led by Diokno is also apparently more respectful of market forces, despite the insistence of critics who have repeatedly asked the committee to consider in its review that there is no longer free competition or free market forces, given the existence of global oil monopolies.

In their regression analysis to determine local and international oil pricing “asymmetry”, Diokno said, they might make a separate analysis for the period during the Aquino administration, because “under Aquino the market may be more respected unlike under Macapagal-Arroyo when prices were ramped to the point that under-recoveries built up.”

Contrary to under-recoveries, estimates of local oil overpricing by progressive organizations from Bayan to Bayan Muna, Kilusang Mayo Uno to Gabriela, range from nearly P8 ($0.19) per liter of diesel to P16.18 ($0.38) per liter of gasoline. Because of the oil monopolies, these groups also said these estimates are still conservative because they have based it only on observable market prices. They alleged that it could be higher, because local subsidiaries have supply contracts with parent companies and they have been engaged in transfer pricing, among others.
“The committee seems to be simply rejecting what we’ve been saying about oil overpricing,” said Bayan Muna Partylist Teddy Casiño.

It does not seem that the review committee has something to say also about the public insistence on reducing taxes on oil. Philippine Chamber of Commerce and Industry vice-president Benjamin Austria said that a significant component of oil prices is tax.

To suggestions that taxes imposed on oil products be reduced or removed altogether, the review committee said you cannot peg the amount of taxes because it would require amendments. They said that what the executive can do is amend the tariff. But then, tariff on oil has been reduced after the oil industry was deregulated – “you just didn’t feel it,” said Diokno.

Sammy Malunes of KMU described as “backward” this view of taxes on oil by Abola. Malunes said there is a big difference between the farmers’ and workers’ consumption of oil products – the bulk of which goes to production and distribution – compared to consumption of private car owners that contribute little to the economy. He said wages are only eight percent of cost of production, and it is the utilities and oil products that increase the costs of producing goods and services.

Leaders of progressive organizations also asserted that it is the government’s job to develop a downstream oil and energy industry, and to regulate its distribution. A representative of the National Economic Protectionism Authority (NEPA) urged the review committee to look into the possibility of tapping into the unspent funds from the Malampaya gas well, to finance the building of a supply pipeline of natural gas.

That would have been great, said Claire dela Fuente of IMBOA of the proposal to promote use of compressed natural gas, which the Philippines already have. As much as 60-percent of bus operators’ cost per day goes to fuel, she said. With it continuing to rise unabated, “How do you survive that?” she asked.