Strike of new union in big hardware supplier a success

The workers’ union had to conduct a strike before the management recognized their union and took back the workers who were summarily dismissed.

MANILA – Reggie Lumauag, 37, runs long distances every weekend, often joining fun runs and marathons. He is an elite runner who is among the top rank in some categories. Lumauag is set to represent the Philippines in a vertical marathon (running toward the top of a building) at Singapore next month.

But most of the week, Lumauag is a worker and since early this year, a union leader. His daily race involves making sure he does his job well and evading the threat of being dismissed from his job. About 300 employees like him (as claimed by the employers) work at Co Ban Kiat, a big hardware supplier. It has more workers than that, claimed Lumauag. He estimates that at the Parañaque warehouse alone, there are at least 100 contractual workers on top of the 300. The union estimates there are more contractuals, such as in the sales staff.

Co Ban Kiat hardware supplies large hardware stores such as in SM mall chain’s Ace Hardware, Robinson’s D.I.Y. hardware, and other hardware stores in Sta. Cruz and Binondo, Manila. It supplies big hardware stores that supplies smaller ones as well. Con Ban Kiat is owned by businessman Johnny Cobankiat, a partner of Henry Sy of SM and an officer of the Filipino-Chinese Chamber of Industries.

In Metro Manila Co Ban Kiat has at least three warehouses, the largest of which is in Parañaque, where Lumauag himself reports every day. At least four times a week this warehouse is restocked by deliveries of large container vans straight from the customs. Inside and outside its warehouse, workers like Lumauag navigate the aisles using either a forklift or a jacklift to transfer and deliver a wide range of hardware items such as safety locks and bolts, vacuum cleaners, pressure washers, handheld and power tools, ceiling fans, etc. 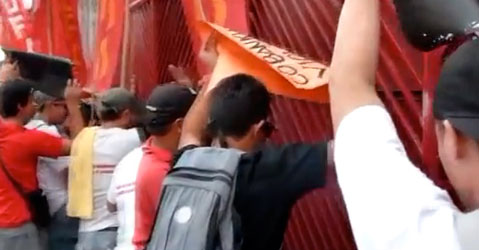 The warehouse has no airconditioning and exhaust and it has few electric fans to cool the place. Lumauag said that if you do not have a strong body resistance, you could not withstand their hot and dusty working place.

“We formed a union for our job security,” Lumauag said during their picket last week. From experience, he or any employee in Co Ban Kiat can be dismissed anytime “for baseless reasons.” Workers here who should have been declared as regular on the job, having worked satisfactorily for more than six months, get fired instead or else transferred to agencies supplying Co Ban Kiat with contractual labor.

At least four agencies reportedly supply contractual workers to Co Ban Kiat. Contractual workers get a five-month work contract, after which, they “rest” for two weeks and then are called again for another five-month contract. From intermittent interviews with assisting sales staff in air-conditioned depots and hardware located in mall chains, it appears that the same contractual arrangement also covers these sales staff. They report to other agencies which are contracted by the mall operators.

Workers at Co Ban Kiat’s largest warehouse began forming a union last year. On May 3, they received their approved union registration from the Department of Labor and Employment. But on the same day, their happiness was marred when their employers fired a hundred workers, bringing to 103 the total of its dismissed employees since a few days earlier. Along with those who were arbitrarily dismissed were four union officers including the union president, Reggie Lumauag.

“It was clear that the illegal lock-out and dismissal are attempts by the management to bust the workers’ union and prevent workers from collectively bargaining to advance their rights to higher wages and job security,” said Roger Soluta, secretary general of labor center Kilusang Mayo Uno (KMU). 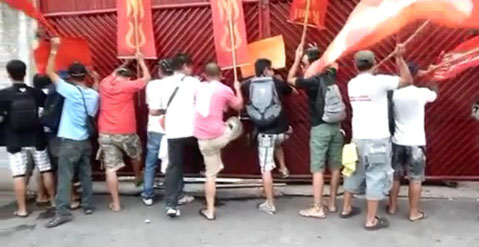 The dismissed employees immediately put up a picket outside the gates of the warehouse, which also reportedly generated support from other unionists. On the third day of their picket, some of the protesters marched-ran to Co Ban Kiat main office in Binondo, Manila, where the police allowed them to hold a program for only 15 minutes.

It was on Monday, the fourth day of their picket, that they managed to file a notice of strike with the labor department. On Tuesday they held a strike vote; on Wednesday they launched a strike.

Co Ban Kiat reportedly still managed to bring out some stocks for deliveries while the newly registered union was complying with the labor department’s requirements before they can lawfully conduct a strike.

It was a full week later, and three days since the workers were officially on strike, that the lawyers for Co Ban Kiat finally agreed to the demands of the union to take back the dismissed workers. The workers’ strike has thus been declared a success.

“The victory of Co Ban Kiat workers is another proof that only through collective and militant struggle can workers defeat capitalists’ most anti-worker schemes. They are successful in asserting their reinstatement and exercising their right to form a union,” said Soluta of KMU.

But even the successful strike is just the beginning for the new union. As the KMU, under whose federation the new union of Co Ban Kiat workers is registered, is thanking the strike supporters and urging other workers to emulate their example, it said in a statement that they are not to “relax their guard.”

Already, the Co Ban Kiat management is terminating some union members saying their work contracts have ended. The employees who have worked 10 months or more and are thus up for regularization are being placed on floating status, or transferred to agencies.

“We still have a lot of work to do,” Lumauag told bulatlat.com.They are opposing the implementation of illegal employment schemes such as labor-only-contracting, or in their case, the management’s shuffling of its employees to variously named agencies directly under its control. As a registered union and bargaining agent, they are also about to tackle the question of improving their wages and benefits in a collective bargaining agreement.