Atrocities all over Negros Occidental

The leadership of the armed group claims they have some 500 members all over the region. And their presence have also meant hardships among the ranks of peasants and farmworkers.

The sufferings of the farmworkers in Hacienda Baldevia, as inflicted by their landowner and its hired members of the RPA-ABB, also happens in other areas in Negros Occidental.

According to Fred Caña of Karapatan-Negros, a human rights organization, the atrocities committed by the RPA-ABB are nothing new. “But there is a trend that it is intensifying.”

Caña said landlords used to hire “blue guards” (private security guards) before the RPA-ABB signed a peace pact with former president Estrada. Members of RPA-ABB that the local government could no longer hire are deployed to several landlords in the region, he added.

Under President Aquino, however, the atrocities that the armed group has committed became even more rampant. Caña said they have even received reports that inactive members of the armed group are now back in service.

“They have become an effective machinery for counterinsurgency and extrajudicial killings,” Caña said. With almost a decade under former president Gloria Macapagal Arroyo, Karapatan-Negros documented 34 killings and nine enforced disappearances in the region. But with only two years under Aquino, the human rights group documented seven killings and four enforced disappearances in the region.

Among the cases of killings under Arroyo was that of Edwin Bargamento, regional auditor of NFSW, who gunned down by members of RPA-ABB on April 23, 2005. “He was a victim of neutralization of the so-called fronts of the Communist Party of the Philippines,” Caña said.

The Bargamento family did not want to speak out because they were afraid to put their lives all the more at risk. But during the International Labor Solidarity Mission in 2006, Bargamento’s brother Sanito expressed the families concerns that the armed group is behind the killing. On September 2006, roughly three months later, Sanito was killed. “The RPA-ABB is allegedly behind it,” Caña said.

The rampant human rights violations are also happening in other areas in Negros Occidental. One such case happened In Sitio Canlusong in the town of E.B. Magalona.

On July 19, 2011, armed men knocked on their door, asking for water. Lelia Devero did not open the door because she was afraid. But the armed men, whom she recognize as members of the RPA-ABB, warned that they would kick open their door. “I told them not to kick our door. I opened it at once and saw seven armed men,” she told Bulatlat.com.

The members of the RPA-ABB then went inside their home, searching their belongings. They went out empty-handed. They hogtied her husband Jully and told him to guide their way to their son’s house. Lelia, on the other hand, insisted that she accompanies her husband. 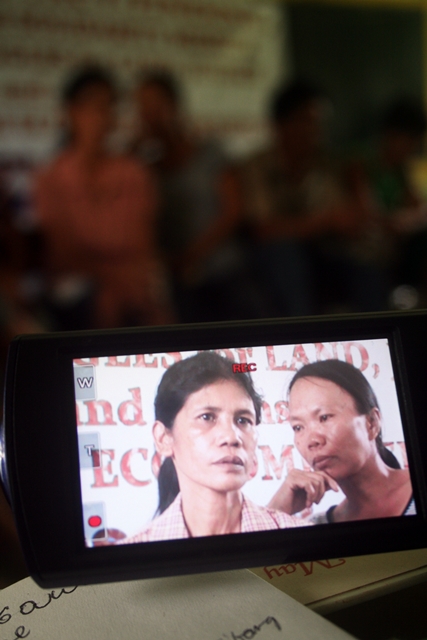 “Do not even try to escape or I will shoot you!” Lelia quoted the members of RPA-ABB as saying when they arrived at her son’s house. Her son and grandson soon came out of the house and they were tied. “I heard them talking to each other, saying that they need to text their ‘bossing.’ After a while, they said they will just take my husband to guide them to another house near the river.”

Lelia held on to the promise of the armed men that they would return Jully the following morning. But they never saw Jully again. On the same day, Lelia found out that two more residents in their community were abducted, Michael Celeste and Gerald Abali.

The abduction of Jully is among the atrocities committed by the RPA-ABB against the Devero family and their community. Their home was also burned down by the RPA-ABB and her 17-year-old daughter was almost raped by the armed men.

Meanwhile, her brother, Joel Seva, who earns by driving a habal habal (a motorcycle used as public transportation), was shot by members of the RPA-ABB. While Seva survived the attack, his house in Victorias City was burned down.

Unfortunately, Lelia’s other brother Rogelio Seva, a fish vendor, did not survive the attack on his life. He was killed on February 19, 2012. His assassins were later identified as Lauro Delgado alias Dodoy along with Herman Cunanan and Hernani Cunanan. Reports from witnesses stated that the three men were riding a blue and white motorcycle. Seva, who was only 53, left behind five children.

The Devero family could no longer return to their home in E.B. Magalona. They are now living in an office of a progressive people’s organization in Bacolod City, where they are relatively safe from the RPA-ABB. They only have one wish, and that is to return to their homes and rebuild their lives without the presence and threats of the armed group.

In its report, Kilusang Magbubukid ng Pilipinas (KMP) and the National Federation of Sugar Workers denounced the human rights violations of the RPA-ABB in Negros Occidental. The farmers groups said the RPA-ABB is “government-funded” and they are calling on President Benigno Aquino III to disband it.

The fact finding team has furnished the Commission on Human Rights a copy of the report of the mission, which was held in four areas in Negros Occidental where “the presence of RPA-ABB equates to heinous crimes against farmers, sugarcane workers and other individuals, especially now that they are being coddled by big landlords in the province.”

Marbella of KMP said “the RPA –ABB has evolved into a bandit group and private army of landlords especially in areas where agrarian disputes exist, like Hacienda Villasor and Hacienda Baldevia in Sagay City.”

“The Aquino government must give justice to the victims of this bandit group by sending members of the RPA-ABB behind bars,” Rillo said. Among the violations committed against the people that the fact finding mission documented are killings, enforced disappearances, arson, attempted murder, sexual harassment, grave threats, coercion, intimidation, indiscriminate firing resulting to destruction of property, strafing, displacement, illegal dismissal, vilification, demolition, violations of domicile and illegal search.

“We know that these are just some of the many atrocities perpetrated by the RPA-ABB in Negros Island. We found more reason for the government to disband this bandit group, hold them accountable for these crimes. Justice for all victims of state repression,” Greg Ratin, KMP-Negros spokesperson, said.

The fact finding and solidarity mission vows to take the rampant human rights violations of the RPA-ABB to both national and international attention. (With reports from Ina Alleco Silverio /