“At times, I just want to leave this case in God’s hands. But every time I think of how these people are helping me, especially the party-list groups, I know I have to fight. I am his mother.” – Glenda Leonor, mother of Arnel who was killed during a violent demolition.

MANILA – “No one is asking me if I ate already,” Glenda Leonor sadly told Bulatlat.com before the program at the basketball court of Silverio Compound started. The residents and progressive groups supporting their struggle commemorated the bloody and violent demolition of their homes just a month ago that led to the killing of her son Arnel, who was only 19 years old.

Leonor said it is hard to accept the death of her son. Her husband Juanito hardly goes home nowadays because he could not accept Arnel’s death as well. “Let us just think that he (Arnel) went abroad. But he would no longer go home,” she said quoting one of her daughters.

Arnel was killed by a lone bullet that pierced his head during the demolition of homes in Silverio Compound last April 23, 2012. Residents said he was merely standing near the center island of Sucat Road when he was hit. Police could be seen indiscriminately firing at the protesting residents in television news reports. They denied their culpability for Arnel’s death, claiming that his killers came from the ranks of the protesters. Not one from the Leonor family believed the claims of the police. 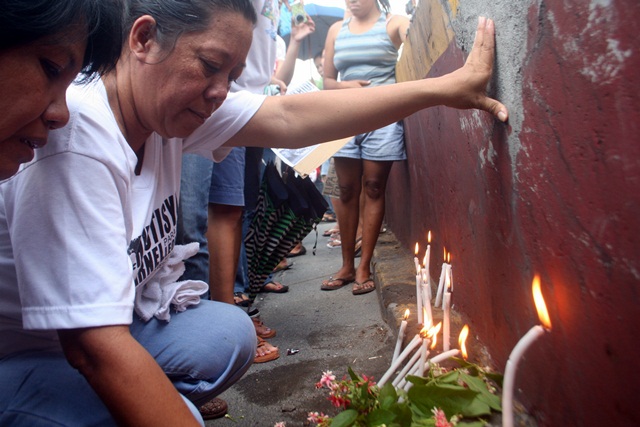 The demolition of the 9.7-hectare disputed land, where homes of about 25,000 families sit, would supposedly give way to the local government’s socialized housing, the Silver Homes. Residents did not allow it, saying that the land was already up for expropriation under the administration of former Mayor Joey Marquez.

In a tarpaulin posted in front of Silverio Compound a few days before the demolition, the local government of Parañaque City would supposedly forge the project in cooperation with the National Housing Authority. The same tarpaulin also bears the name of President Benigno “Noynoy” C. Aquino III as one of the implementers of the Silver Homes project. There were also reports that the local government has already signed a contract with SMDC, a real estate company owned by business tycoon Henry Sy, to develop the housing project. SMDC, however, denied such allegations through its Twitter account on the day of the demolition.

Many injured residents were brought to the hospital that day. Others preferred to tend to their wounds at home for fear that they would be arrested by the police. About 33 were arrested on April 23, 2012, including those who only passed by. A month later, 10 of the arrested residents are still detained, charged with non-bailable crimes.

Leonor said a month has already passed but the National Bureau of Investigation has not come up with significant findings in their probe of the killing of her son.

In a Philippine Daily Inquirer report, Alvin David, medico legal division chief of the NBI who conducted the autopsy, said that the size of the entry and exit wounds indicate that the bullet was fired from either a .38 caliber or a 9mm handgun.

“Just last week, my husband went to the NBI office to ask for updates. But they are still asking for one more week (to finish the investigations),” Leonor said. She added that officials from the National Police Commission have already visited them and gave their word to the family that they too will conduct their investigation. “But they said the most that they can do is to remove the culprit from service.”

“That is okay with us (if the police would be dismissed from service). But we cannot accept that it would be the most severe punishment they would get. They should be held accountable for what they did,” Leonor said. 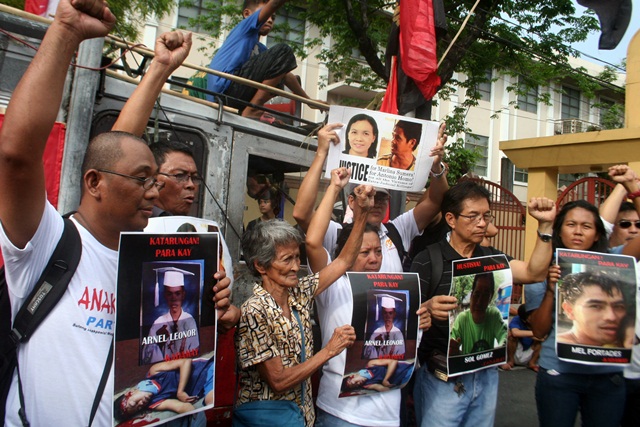 In an interview with Shella Bernal, a resident and president of Samahan ng Pagkakaisa at Rekonsilasyon sa Silverio, she said they have been going from one government agency to another to ask for assistance to enable them to keep their homes and get justice for what has happened to their community. But so far, they have not yet secured any significant assistance.

The Alyansa ng Mamamayan sa Silverio said in a statement “We see no progress over our demands for justice to all the victims of the demolition” despite promises of government agencies such as the Commission on Human Rights, National Bureau of Investigation and the Department of Justice “to probe and prosecute all involved individuals and institutions.”

Bernal, who is also the spokesperson of Alyansa ng Mamamayan sa Silverio, criticized Parañaque City Mayor Jun Bernabe who is still “fulfilling all possible legal requirements in order to still push through all forms of demolitions and at the same time nullify the existing expropriation order of our land.”

She added that Mayor Bernabe is currently lobbying before the city council to pass an ordinance that provides for a Community Mortgage Program by constructing medium-rise buildings through the National Housing Authority instead of expropriating the land.

Bernal also told Bulatlat.com that they have been hearing reports from their neighbors that men hired by the local government are circulating two signature campaigns, one stating that residents are accepting the socialized housing and the other requesting for a military detachment.

“We, too, are launching our own signature campaign and it states that the residents are supporting the continuation of the expropriation of the disputed lands,” Bernal said.

On May 23, 2012, residents and members of progressive organizations supporting the struggle of residents of Silverio Compounds commemorated the first month since the violent demolition and the killing of Arnel. After a short program in the community’s basketball court, where the likes of Anakpawis Rep. Rafael Mariano, Pamalakaya national president Fernando Hicap, Bayan-NCR’s Roy Velez, among others gave their solidarity messages, they visited and lit candles on the exact spot where Arnel was killed. 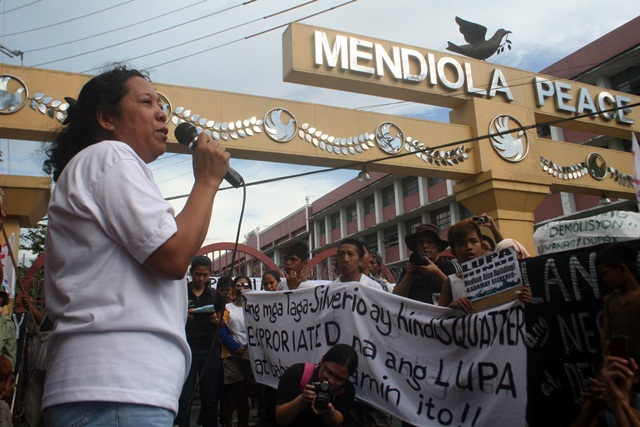 Leonor was very emotional as she laid down the flowers she picked from her plants at home. This was her first time to visit this place. “Noy, if only I was here for you. I could have done something,” she said tearfully as her neighbors and friends tried to comfort her.

They then headed to Mendiola, which is just a stone’s throw away from Malacañang, where they were met with other urban poor dwellers in Metro Manila, who, like them, are facing threats of demolition. There were three major contingents that merged in Mendiola from Ayala Bridge, Recto and Bustillos who came from different urban poor communities in Parañaque, Montalban in Rizal, Caloocan, Quezon City, Tondo, San Juan and Manila.

“Mixed emotions. It is very heartwarming that so many people arrived to show their support for us,” Bernal said.

The urban poor groups who protested in Mendiola also demanded justice for their martyrs such as Arnel, Simeon Bayogbog of San Isidro, Rodriguez, Antonio Homo of Navotas and the two martyrs from Pangarap Village in Caloocan, namely: Rommel Fortades and Soliman Gomez.

“Today, we demand justice for Arnel Leonor and fallen martyrs of the urban poor, the Isla Puting Bato residents and all the victims of violent demolitions , which were sponsored by the Aquino government,” Carlito Badion, Kadamay national vice chairperson, said.

Badion said President Benigno C. Aquino III “cannot just wash his hands on his responsibility over the violent demolitions. The Aquino government is chiefly liable.” He added that instead of putting a stop to the series of demolitions, the government is still pursuing public-private partnership programs that are “wreaking havoc on urban poor communities nationwide.” 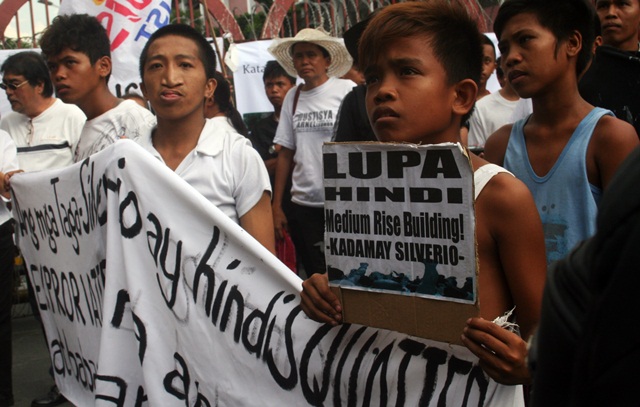 The injustice continues, Badion said, because the government policy to address the problems of the urban poor is dislocation. He added that several urban poor communities in Metro Manila alone are facing threats of demolition.

“The Aquino government coddles foreign and local big capitalists in the name of so-called ‘development’ and poverty alleviation at our expense. This government does not represent us,” Badion said.

Kilusang Mayo Uno, who also joined the protest action in Mendiola, said in a statement that they are also condemning the Aquino administration for pushing public-private partnership projects that violently demolish urban poor communities.

“The Aquino government is quick to deny any hand in violent demolitions and even in the death of Arnel Leonor, but its PPP projects are causing these demolitions. We are taking it to task for the eviction of the poor from their homes and communities,” KMU chair Elmer Labor said.

Gabriela, for its part, said the brand of development that the government is implementing only benefits the interest of the ruling few. “The urban poor do not get even the smallest share from this development. We only get violence instead,” Nere Guerrero, Gabriela national council member and chairperson of Samahan ng Maralitang Kababaihang Nagkakaisa, said.

Bernal said they vow to block all attempts of the local government to take away their land.

“At times, I just want to leave this case in God’s hands. But every time I think of how these people are helping me, especially the party-list groups, I know I have to fight. I am his mother,” Glenda said.