A month has passed since the brutal demolition at the Silverio Compound in Parañaque City that resulted in the death of Arnel Leonor but justice is still not served. After a program at the barangay gymnasium, the Silverio residents lit candles at the spot where Leonor fell.

The Silverio residents then went to Mendiola and met with residents of the other urban poor communities who also face threats of demolition.

“Who else will support them but their fellow citizens who are also facing demolitions,” said Glesy Macabali of Save Freedom Island Movement. “The oppression and violence is continuous, we are one [with the Silverio residents] especially because we are also from Parañaque.” 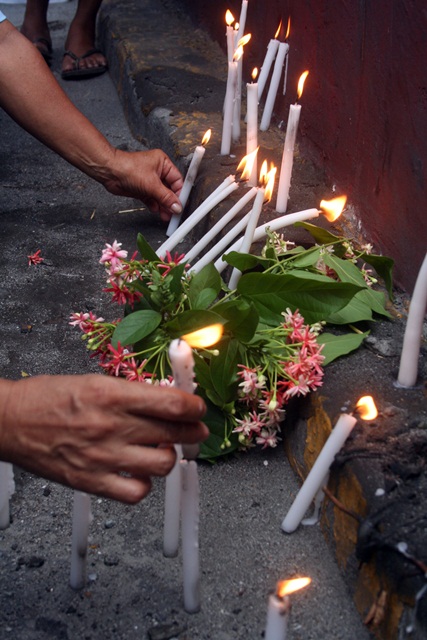 The reclamation threat in Freedom Island was set aside after a ‘writ of kalikasan’ was issued, temporarily stopping the Manila Bay Reclamation Project because the island is a “critical habitat.” The residents are still watchful in spite of the issuance of the ‘writ of kalikasan’ because it will only last from three to six months.

The government is planning to reclaim 635.14 hectares to include Freedom Island to build an “entertainment city.” If the reclamation will push through, the water will become stagnant and will affect the marine ecosystem, according to Macabali.

“The violent demolitions that are happening is a manifestation of the government’s lack of program for the poor.” said Arnold Repigue, president of Sandigang Maralitang Nagkakaisa (SAMANA). “The government gave lots of promises but all it does is to sow terror. The situation of the poor is getting worse.”

Repigue is a resident of Brgy. Corazon De Jesus, San Juan City where a brutal demolition happened last January 2012. A medium high-rise building was supposed to be built in the area.

“The government is ‘cleaning’ the Philippines for the sake of foreigners, we are squatters in our own country.” said Estrelita Bagasbas, spokesperson of Alyansa Kontra Demolisyon (AKD) in her speech during the program in Mendiola. “What [President] Aquino is doing is for the development of the country but we [poor] are not included, only the businessmen benefit from it through the Public-Private Partnership program.”

Bagasbas is a resident of San Roque, Quezon City, one of the areas that will be affected by the Quezon City Central Business District. Fires frequently happen in the area and the three most recent were allegedly done on purpose.

“It has already been a month since Arnel’s death and there is still no justice. What happened to Arnel should not discourage us, we must unite and fight the government’s oppression among the poor.”

“Ka Rod” a resident of Montalban, Bulacan was also present in Mendiola to be one with the Silverio residents in calling for justice for the death of Leonor and their leader Simeon Bayogbog. He was a former resident of Commonwealth, Quezon City and was relocated in Bulacan when their community was razed by a fire.

“As much as possible, they should not accept the relocation and fight to stay in their homes,” said ‘Ka Rod’ when asked about their situation in Montalban. “The life there is also difficult, slight rainfall is accompanied by flood. When we arrived, there was no water and electricity, even the transportation is hard.” 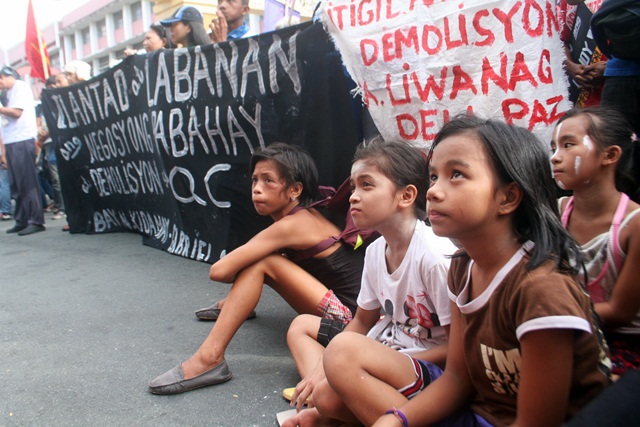 “The government should give attention to the violent demolitions that are continuously happening and should not be deaf to the demands of the poor. The lives of the rural and urban poor are not at peace anymore, they are already unemployed and their houses are also being taken away from them. We should fight for justice and the right to a decent home.” said Mesa during an interview.

The Luisita farmers are hoping that the distribution of land will still continue now that the Supreme Court had already decided to distribute the 4,916 hectares of Hacienda Luisita land to the original 4,296 farmworker beneficiaries.