“It is expected that the Aquino regime will hail the Corona conviction as the ‘crowning glory’ of its so-called daang matuwid (righteous path) crusade. We take exception to this for the simple reason that outside the impeachment, the Aquino government has not done much in terms of political and economic reforms, respect for human rights and the cause of justice.” – Bayan

In a statement, progressive youth group Anakbayan said the conviction of the Chief Justice will grant President Benigno “Noynoy” S. Aquino III and his ruling clique full control not only of the judiciary but effectively all branches of government. “As such the government will have more powers for the expedient implementation of anti-people and anti-poor policies.”

Bayan also called for people’s vigilance and direct action that will counter efforts by Aquino and his Liberal Party (LP) to take advantage of Corona’s ouster to control the judiciary for their “own selfish political and economic agenda.”

“Concerns raised about the possibility of an ‘Aquino court’ are valid and should not be dismissed. The possibility of Aquino using a now friendlier Supreme Court to undermine its earlier decision on Hacienda Luisita is a particular concern that we must all vigilantly check and strongly expose and oppose.” 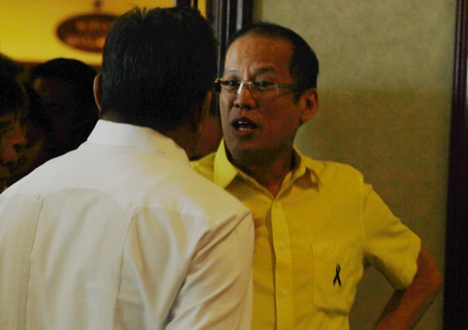 On May 29, the Senate impeachment court convicted Supreme Court Chief Justice Renato C. Corona guilty of Article II of the Articles of impeachment or culpable violation of the Constitution and/or betrayal of public trust when he failed to disclose to the public his Statement of Assets, Liabilities, and Networth as required under Section 17, Article XI of the 1987 Constitution. Twenty Senator judges found Corona guilty while only three voted for his acquittal.

Anakbayan pointed out that the people should be reminded of Aquino’s real motives behind the impeachment and the more essential issues behind it. The group said it was intended as a counterblow against the historical Supreme Court decision ordering the distribution of Hacienda Luisita lands to farmworkers and the junking of the Stock Distribution Option (SDO) in Luisita.

“Corona’s removal from the SC will enable the landlord president and his family the power to overturn the high court’s decision and preserve their monopoly over their vast landholding. Clearly, the Aquino ruling clique is willing to step up their attacks and use the entire state machinery to compel other members of the high court to toe the line set forth by Aquino and his allies.”

Reform groups Pagbabago! And Gloria Panagutin Movement also stressed that Corona’s removal from the Supreme Court must not be taken advantage of to serve any vested interests.

“The fear of Hacienda Luisita farm workers that the Supreme Court ruling on the issue of compensation for the Cojuangcos based on a lower valuation could be reversed with Corona’s removal must be assuaged. The Hacienda Luisita farm workers fought long and hard for the land to finally be distributed to their rightful owners. They do not owe their legal victory to Corona. And they will certainly not allow his replacement by an Aquino-appointed Chief Justice as the means to reverse their landmark victory.”

Pagbabago! And Gloria Panagutin Movement meanwhile asked Ombudsman Conchita Carpio-Morales to use her power as Ombudsman to file plunder charge against Arroyo.

“While we laud the fact that the testimony of Ombudsman Carpio-Morales proved to be disastrous for the Chief Justice, we cannot help but wonder, can not the Ombudsman similarly utilize all the vast powers at her disposal to gather sufficient evidence to file a plunder charge against Gloria Macapagal-Arroyo?”

For two years of the Aquino regime, which promised change, the group said, plunder cases filed by cause oriented-groups and private individuals against Arroyo have either been gathering dust in the Office of Ombudsman or have been downgraded to simple graft and corruption charges such as the ones on the NBN-ZTE Broadband scam. It also underscored that not a single case against Arroyo have been filed by the Aquino administration.

“And even as various civil and criminal suits for human rights violations have been filed against Arroyo and her generals by the victims and their families, there have been no serious attempts at prosecuting and punishing the perpetrators and their coddlers in the Arroyo administration. The notorious Gen. Jovito Palparan is continuously able to evade the long arm of the law, human rights violations continue unabated and impunity for such heinous crimes prevails.”

The group then challenged Aquino, “With the Arroyo-appointed Ombudsman and Supreme Court Chief Justice out of the way, we challenge the Aquino administration to deliver on its promise to make Gloria Macapagal-Arroyo and cohorts answer for their crimes against the people.”

On the other hand, Bayan also stressed that Aquino should act on people’s issues as it has done nothing to address the economic crisis afflicting Filipino people.

“It is expected that the Aquino regime will hail the Corona conviction as the ‘crowning glory’ of its so-called daang matuwid (righteous path) crusade. We take exception to this for the simple reason that outside the impeachment, the Aquino government has not done much in terms of political and economic reforms, respect for human rights and the cause of justice. There is no ‘daang matuwid’ for many of our people who continue to reel from poverty, oppression and injustice. In fact, even as the impeachment verdict is handed out, the Philippine government is again making excuses before the United Nations Human Rights Council on why impunity in human rights violations continues in the country.”

Bayan pointed out that Corona’s conviction is not the be all and end all of reforms to rid the bureaucracy of systemic graft and corruption. “On the contrary, it’s just a small step forward as more thoroughgoing reforms are needed. However, we fear that under the Aquino government, it will still be business as usual, at least for its political allies and KKK’s (Kaklase, Kaibigan, Kamag-anak and Kabarilan or classmate, friend, relative and firing buddies). The people must therefore press on with their legitimate demands and struggle for genuine change that goes beyond Aquino’s overused ‘daang matuwid’ rhetoric.”