‘Greening’ of economy, a business ploy

The so-called ‘Green economy’ will intensify the plunder of the world’s remaining natural wealth and the privatization of critical services, technologies and products through Public-Private Partnerships and similar market-driven mechanisms.” – Frances Quimpo, Kaliakasan Partylist

MANILA — Hundreds of environmental activists in the Philippines held a protest action in front of the United States Embassy to show solidarity with peoples from other countries during the June 20 Global Day of Action. The Global Day of Action coincided with the opening of the Rio+20 Conference on Sustainable Development. In Brazil, Filipino environmentalists, agrarian reform advocates, women’s rights leaders and progressive economists also led parallel activities at the conference site in Rio de Janeiro.

The Rio+20 conference is the follow-up to the 1992 Earth Summit also held in Rio de Janeiro that promoted the concept of Sustainable Development. The Agenda 21 was the summit’s resultant action plan, which was adopted by the 178 participating governments.

The groups led by the International League of Peoples’ Struggle (ILPS) and Kalikasan People’s Network for the Environment (Kalikasan PNE) challenged world leaders to reverse the prescribed natural resource and industry privatization and commercialization schemes packaged as the “greening” of key economic sectors, a business-as-usual approach that benefit top polluter nations led by the US.

Trying to save face after destroying global ecology

In a statement from Brazil where he is attending counterpart activities to Rio+20 Conference, Clemente Bautista, national coordinator of Kalikasan PNE, said the world’s advanced capitalist nations are trying to save face after 20 years of global ecological destruction and socio-economic crisis under the banner of sustainable development. 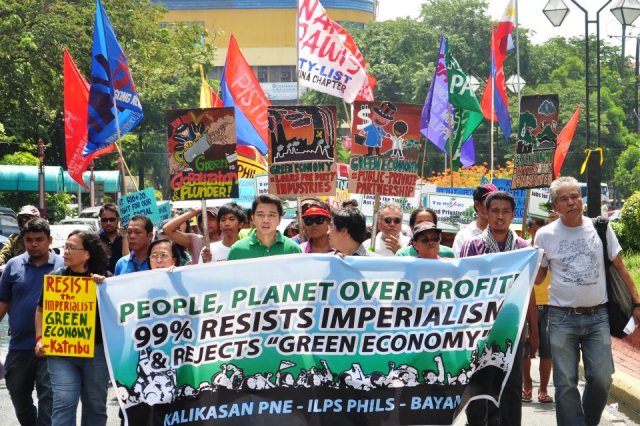 “The green economy paradigm peddled in the United Nations has given nothing but public-private investments and other market-based mechanisms in reducing the ecological and carbon footprints of industries,” he said. “The transition to a Green Economy, according to its architects, calls for financing from international financial institutions, speculators, conditional loans and other market-driven forces. It is clear from our two decades of experience under the corporatization of such sectors as energy, water and mining that public development standards are never met when project implementers are profit-oriented,” he said.

The activities are sponsored by Ibon International, Rights for Sustainability and Cupula dos Povos.

Critics, however, pointed out that concerns involving food security, jobs creation and human rights are being left out of the discussion.

“Concerns for genuine land reform, labor rights and welfare, accessible social services and human rights are watered down, if not outright thrown out of the negotiations. In addition, the fact that the green economy framework is unable to meet greenhouse gas emissions reduction targets prescribed by science makes for a recipe of disaster. Abject poverty will be left unaddressed, increasing the vulnerabilities of the poor and dispossessed to extreme weather events and other climate change impacts,” said Bautista.

The groups reiterated the need to advance genuine pro-people and pro-environment solutions to the long-standing crisis posed by imperialist globalization policies.

“Green technologies and industries, and more importantly, basic people’s needs should be made universally accessible to the public, and the development of environment-friendly resource and industry management should be ensured by the state. For our part, the people must expose and oppose corporate greed disguising itself as a “Green Economy” and reject the profit motive of imperialist globalization,” Bautista said.

Putting a price on nature and resources

Kalikasan Partylist Secretary-General Frances Quimpo, also in a statement from Brazil, said the strong opposition against the “Green Economy” being proposed at the Rio+20 negotiations is due to the said reforms’ wide-reaching implications and negative impact in the long run.

“The ‘Green Economy’ is being used as a ruse to expand markets and profiteering by large corporate interests. In the guise of using natural capital as a driver for growth, it will put a price on ecological services, resources and knowledge—paving the road for the financialization of nature. It will further perpetuate the plunder of the world’s remaining natural wealth and the privatization of critical services, technologies and products through Public-Private Partnerships and similar market-driven mechanisms,” Quimpo explained. 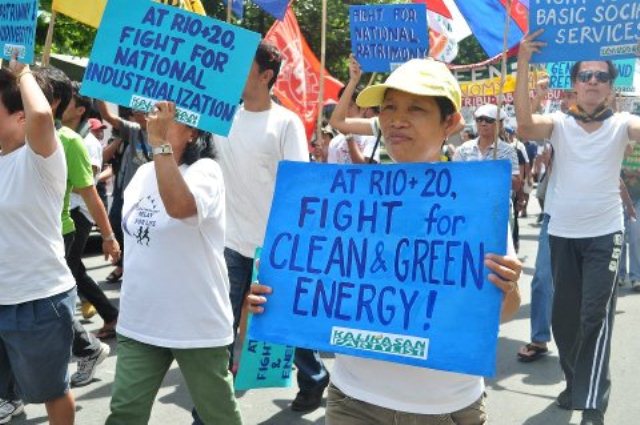 Environment advocates in a rally at US Embassy in Manila (Photo courtesy of Kalikasan-PNE / bulatlat.com)

She said the transition to a Green Economy requires massive amounts of capital, estimated to reach around 2 percent of the world’s Gross Domestic Product.

“Most of this will come from funds to be managed by the World Bank and the International Monetary Fund,” she pointed out.” It’s green-washing on a global scale, and is not the solution to any of the interconnected problems that the world faces: the crisis of overproduction, the massive emission of greenhouse gases into the atmosphere, and the unprecedented destruction of our planet.”

Quimpo said that what people need is not the “Green Economy” but genuine development for the people: one which protects the country’s rich natural resources, develops the domestic economy to be self-sufficient, and which upholds social, economic and environmental justice.

Also in Brazil, the International Women’s Alliance (IWA) demanded an end to what it said was “the current system of greed and plunder that continues to destroy the lives of women and their communities.”

Speaking during a protest at the conference site in Rio de Janeiro, IWA Deputy General Secretary and Rights for Sustainability (R4S) delegate Maria Teresa Ledesma said people need to build bridges of solidarity that will deal a mortal blow to the system of greed and plunder.

“We need that system change now!,” she said.

IWA is is a global alliance of anti-imperialist grassroots-based women’s organizations, institutions, alliances, networks and individuals committed to advancing national and social liberation

IBON International Director and Rights for Sustainability (R4S) delegate Antonio Tujan, Jr. also called for an end to capitalism through a system change.

Speaking at a forum on New Economy and Other Paradigms of Society, Tujan said capitalism has reached its limits.

“Suffering from crisis after crisis, global capitalism is seeking expansion to new markets to rake in greater profits through corporate green economy. This has lead to not only the commodification of nature, but also to its financialization which pushed further the limits of nature and brings more suffering to the people,” he said.

Tujan said the United States is the main promoter of corporate green economy in the Rio+20 through investments in water, energy, and agriculture which will lead to more land grabbing and water privatization.

“Already, corporate investments in the third world are milking away life-sustaining resources from people. Foreign land deals in Africa are producing food and biofuels for the Northern countries while Africans suffer malnutrition and starvation. Rivers are dammed in Asia for hydroelectric power, destroying farmlands and indigenous territories.

Tujan said there will be no solutions to the crisis as long as the financial oligarchies maintain control over the world economy and institutions such as the UN. He said financial oligarchies “are like vampires that draw blood from poor host nations” through official development assistance (ODA), tied aid and foreign direct investments (FDI).

“Governments controlled by these financial oligarchies offer aid to developing nations but with attached structural adjustment conditionalities that allow foreign investors to take $4 USD in profits for every $ 1USD investment made. The solutions are not bail-outs. What we need is system change. We need to dismantle monopoly capitalism and put in place collective management of property which is real democracy. We need to change the nature of production of our economy which has led to the monopolization and centralization of resources into the hands of a few. We need to end capitalism,” he said.