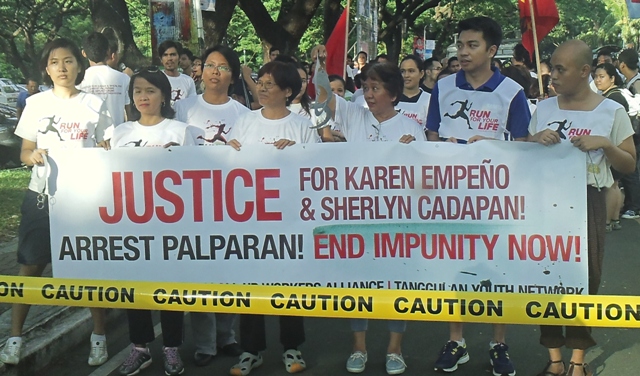 MANILA — Marking the sixth year of the disappearance of Sherlyn Cadapan and Karen Empeño, students, faculty members of the University of the Philippines (UP), human rights advocates and joggers joined the mothers of the two missing UP students in a run dubbed as “Run for your life,” June 22.

The 4.4-kilometer run “captured” retired general Jovito Palparan Jr. who has been charged with kidnapping and serious illegal detention in connection with the abduction of the two UP students. Palparan remains fugitive six months after a Bulacan local court issued a warrant of arrest against him and three other soldiers. 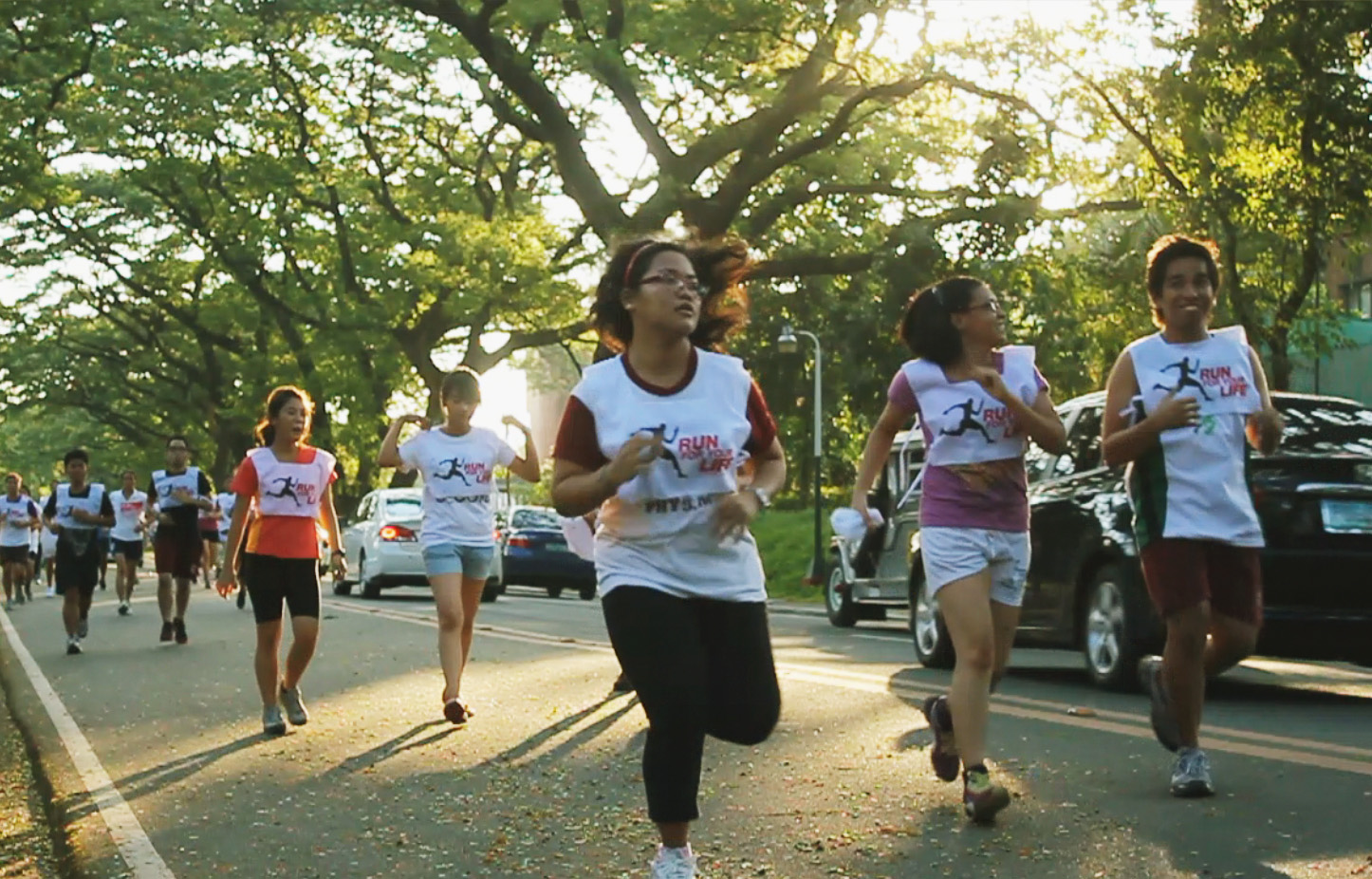 In a symbolic action, the mothers of the two students, Erlinda Cadapan and Connie Empeño, arrested and jailed Palparan. Their daughters were taken by suspected state agents under Palparan’s command on June 26, 2006. 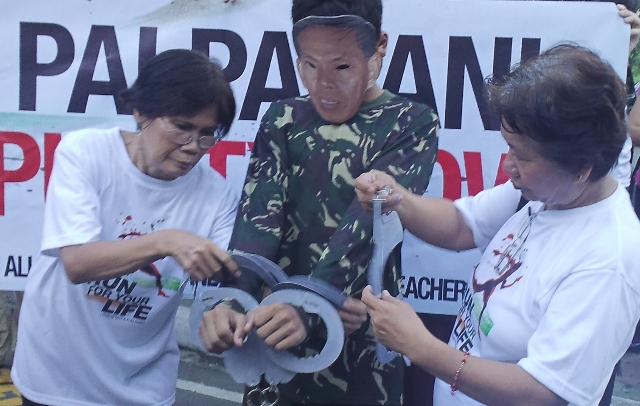 “Palparan personifies the prevailing state of impunity in the country and the Aquino government’s tolerance for torturers and human rights violators like Palparan and his master Gloria Arroyo, despite outrage that extends from among those in the international community,” Cristina Palabay, Karapatan spokeswoman, said in a statement.

Palabay, who was part of the Philippine UPR Watch who lobbied in Geneva, referred to the recently concluded UN sponsored Universal Periodic Review (UPR) where some 69 countries questioned the Philippine government on its human rights record. At least 22 countries specifically expressed concern on the continuing impunity and in particular, the spate of extrajudicial killings, enforced disappearances and torture, while Australia made recommendations on the arrest of Palparan. The European Parliament, in their June 14 2012 resolution, also specifically pointed to the government’s “insufficient ability” to “effectively combat the widespread impunity of the perpetrators of such acts and tackle the politically motivated violence in the country.” 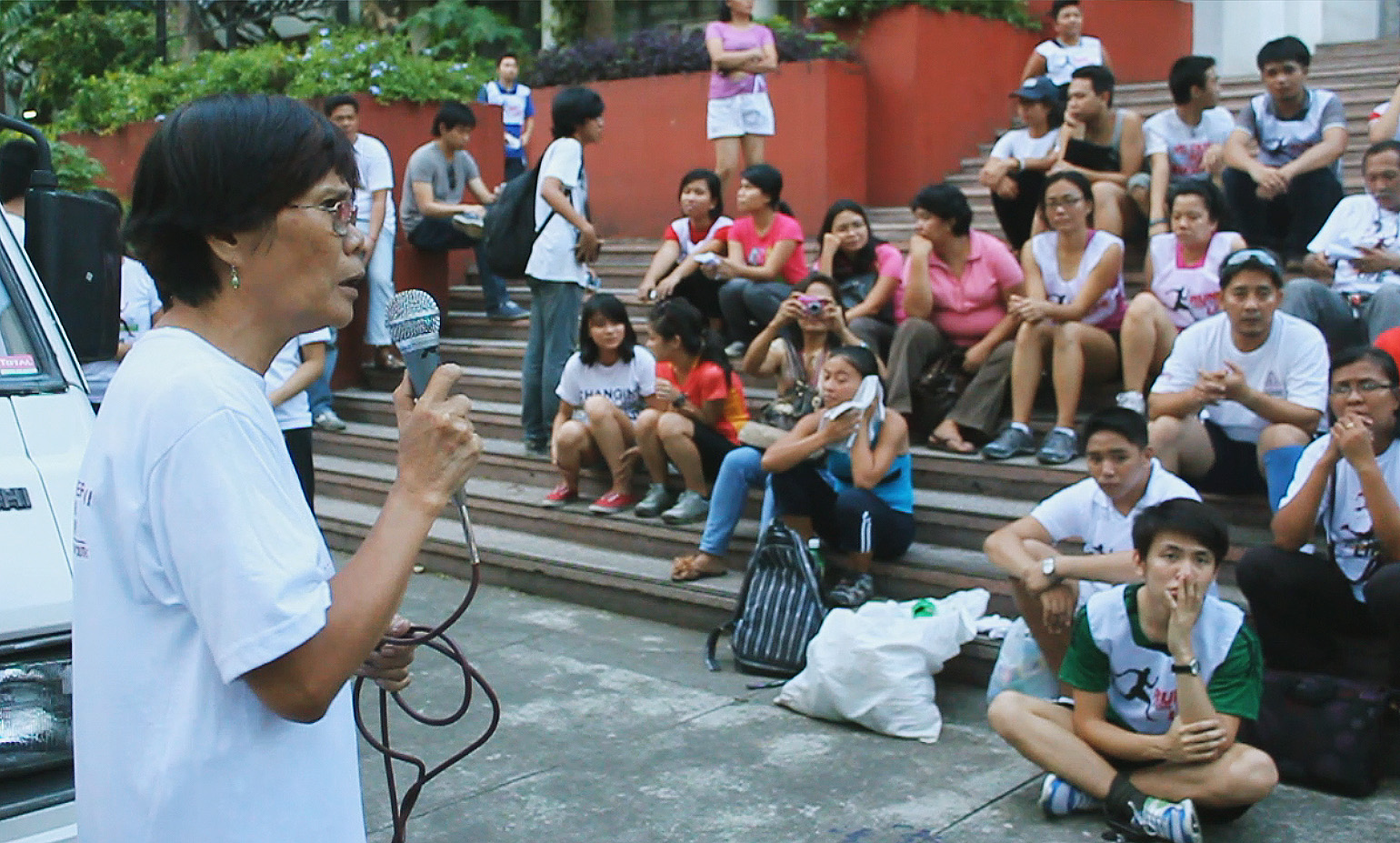 The activity is also a prelude to the commemoration of the United Nations International Day in Support of Victims of Torture on June 26.

“Sherlyn and Karen were both victims of torture in their captivity. The state continues to employ torture against those it considers as ‘enemies of the state’. Survivors of abduction and many political prisoners could attest to this,” said Prof. Sarah Raymundo of UP Kilos Na! and Karen Empeño’s former professor in UP Diliman.

To date, Karapatan has documented 96 victims of torture and 76 victims of extrajudicial killings, 363 political prisoners and nine have been forcibly disappeared under the Aquino administration.

Felix Pariñas of the All UP Workers Alliance said that the activity is a “tribute to the victims of torture and all other forms of human rights abuses, and is a way to give voice to the call for justice.” 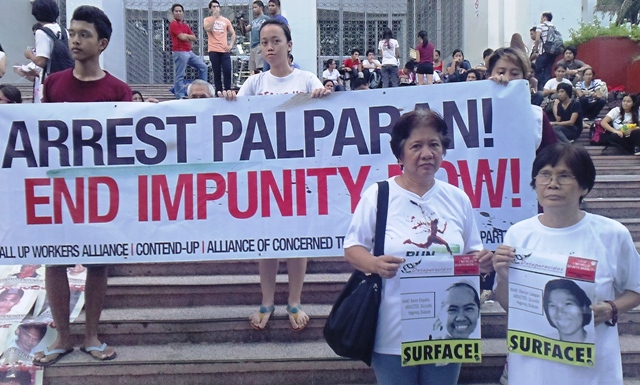 “The Philippines may be a signatory to international human rights instruments such as the Convention against Torture but state security forces continue the use of torture and at the very least tolerates it, as none have been punished for violating the Anti-Torture Law. Palparan stands out as an example. Until the Aquino government acts to put ‘The Butcher’ and his master Gloria Arroyo in jail for the crimes they have committed and unless Aquino ends its OBL-rehashed Oplan Bayanihan, impunity prevails and more people’s rights will be violated,” Palabay said.