MANILA – Cesar Garganta, 28, merely wanted to earn extra income for the enrolment of his two children. Instead of money, what Garganta got was pain and trauma.

On May 28, Garganta and his two friends went to work on a farm in Vista Hermosa village, Macalelon, Quezon. At around 9 a.m., the three chanced upon more than a dozen men in uniform armed with high-powered rifles. The soldiers shouted at the three farmers and Garganta’s two companions immediately ran away, leaving Garganta behind.

“For five hours, the soldiers beat me up. They pointed their guns at me, pointed a bolo knife on my neck. They squeezed my nose with pliers, pricked my ears with sticks. They blindfolded me and tied me to a tree,” Garganta said in an interview with Bulatlat.com. The soldiers belonging to the Philippine Army’s 85th Infantry Battalion were insisting that he and his fellow farmers were members of the New People’s Army (NPA).

Garganta is only one of the 128 victims of harassment, torture and other forms of human rights violations perpetrated by suspected state agents in Quezon, according to human rights alliance Karapatan-Southern Tagalog (Karapatan-ST). Eight battalions of the Armed Forces of the Philippines, police and paramilitary are deployed in the 22 towns of the province. 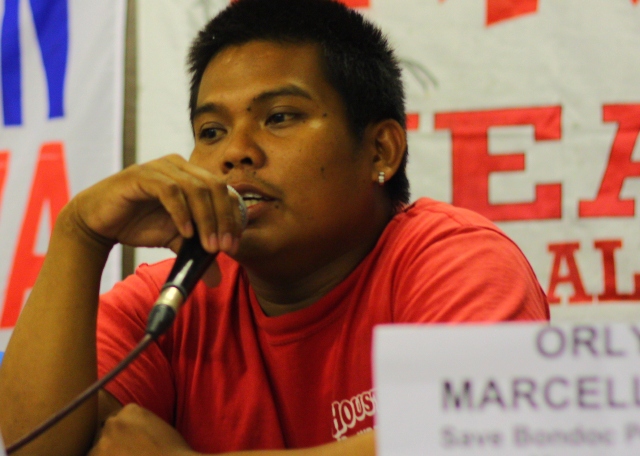 Farmer Cesar Garganta recalls how the soldiers subjected him to physical and psychological torture in a press conference, June 25. (Photo by Ronalyn V. Olea / bulatlat.com)

In another town, Eduardo Dela Peña, 37, also suffered harassment from the military.

On June 22, at around 3 p.m., Dela Peña was tending to his farm at sitio Sabang, barangay (village) Pagsangahan, San Francisco, Quezon when nine soldiers of the 59th and 74th IB of the Philippine Army approached him.

Speaking during the kick-off activity of the mercy mission led by the Save Bondoc Peninsula Movement, June 25, Dela Peña said soldiers accused him of being an NPA member. “They asked me names I do not know. Whenever I said I did not know the persons they were asking about, they punched my stomach,” he said in the vernacular.

The soldiers went with Dela Peña to his house. “I heard the commander ordering his men to kill me. Not long, a soldier pointed a 45 caliber gun at me,” he said. 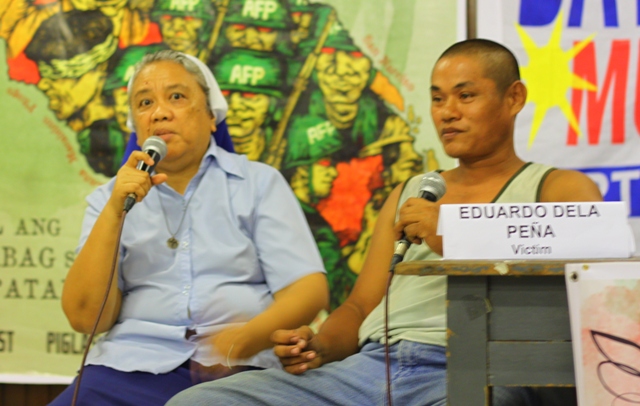 Eduardo Dela Peña shares why he and his family were forced to leave their home in San Francisco, Quezon. Beside him is Sr. Francis Anover of the Rural Missionaries of the Philippines who also joins the mercy mission. (Photo by Ronalyn V. Olea / bulatlat.com)

Later, the soldiers left but not until they told Dela Peña to report to the barangay hall on June 27. “They told me they would see me there to ask further questions and if my answers would be wrong, they would kick me,” Dela Peña related.

Out of fear, he and his wife, Paz, and two of their children fled their house. His ten other children temporarily stayed with the neighbors since they are studying.

Orly Marcellana, spokesman of the Save Bondoc Peninsula Movement, said military operations under Aquino’s Oplan Bayanihan hamper the economic activities of farmers in the province.

“Militarization caused fear and hunger among the farmers. The farmers could not work the way they used to because the soldiers are in their rice fields and coconut farms,” Marcellana said.

Marcellana said soldiers require farmers to attend mass meetings or report to their camps. “If they refuse to go, they would be included in the military’s order of battle,” he said.

Marcellana said that while the military aims to wipe out the insurgency in the province, it is the ordinary farmers who bear the brunt of human rights violations. “They go by the principle ‘Limasin ang tubig para mahuli ang isda’ (Dry up the water so you could catch the fish).”

The peasant leader noted that today’s military deployment in the province is the biggest since the Marcos dictatorship. He said the troop deployment in the 22 towns in South Quezon is much bigger than the nine battalions deployed before in the two provinces of Mindoro during the administration of Gloria Macapagal-Arroyo.

“Instead of listening to the plea of the rural folk, the government sends in soldiers,” Marcellana said. “We don’t need them in Quezon. What we need is land and social justice.”

Marcellana said the massive military deployment is “a response to the resistance of farmers against feudal exploitation and so-called developmental projects such as dam and mining.”

The Save Bondoc Peninsula Movement organized a mercy mission and peace caravan starting today until July 2.

The mission aims to document cases of human rights violations and provide relief and medical mission to the affected villages in South Quezon.

Marcellana said that after the mission, they hope to file cases in court against perpetrators of human rights abuses.

Garganta and Dela Peña are among the more than 400 participants to the mission.

Garganta said he would defy the military’s warning. “I have decided to speak up because if I would not, the same would happen to others,” he told Bulatlat.com.