The Department of Agrarian Reform has interviewed 8,400 farmworkers when the tentative list of beneficiaries includes only 6,296 farmers who signed the stock distribution option in 1989.

MANILA – Florida Sibayan, 55, does not believe President Benigno Cojuangco-Aquino III when he said that he would respect the Supreme Court ruling ordering the distribution of the land of Hacienda Luisita.

Sibayan, who worked as a farm worker in Hacienda Luisita since she was 15 years old, joined hundreds of farm workers in a protest vigil near Malacañang. Despite the April 24 Supreme Court final ruling ordering the distribution of more than 6,000 hectares of land in the hacienda controlled by the Cojuangco-Aquinos, Sibayan and the other farm workers still have no land to till.

After the issuance of the SC ruling, Aquino said he respects the decision but at the same time raised the issue of “just compensation” for his family.

“He is a liar,” Sibayan said of Aquino in an interview with Bulatlat.com, June 24. “It’s not true that they [Cojuangco-Aquinos] would give up the land.” 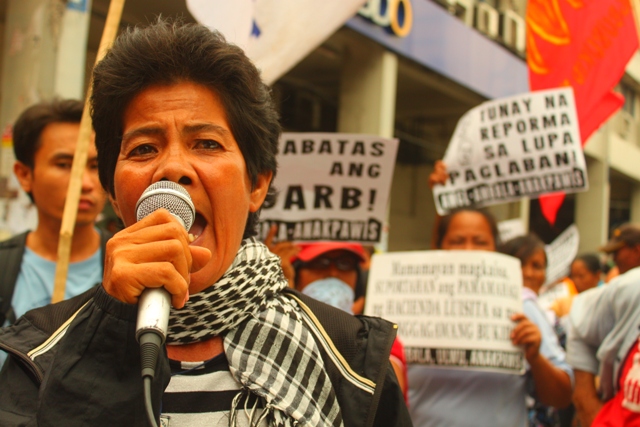 In a statement, the Kilusang Magbubukid ng Pilipinas (KMP) criticized the verification process of the Department of Agrarian Reform (DAR).

Reports said the DAR has interviewed 8,400 farmworkers when the tentative list of beneficiaries includes only a total of 6,296 farmers who signed the stock distribution option in 1989. The KMP said that in just two barangays (villages), the DAR already interviewed 6,000 farmworkers, particularly in the villages of Cutcut and Balete.

Agrarian Reform Secretary Virgilio de los Reyes said the second round of interviews would start on the first week of July. A third round of interviews will conclude the screening and validation process.
“Under the guise of a so-called ‘verification process,’ the DAR, with the blessings of no less than President Aquino, is maneuvering to evade land distribution,” said Kilusang Magbubukid ng Pilipinas (KMP) deputy secretary general Willy Marbella.

“The DAR’s highly questionable verification process is all in accordance with the Cojuangcos move to bloat the number of beneficiaries, further reduce the size of land for distribution, sow confusion and disunity among farmworkers, and eventually put their dummies and loyalists as so-called beneficiaries,” the peasant leader said.

“The DAR’s verification scam must stop. It puts genuine Hacienda Luisita farmer-beneficiaries in danger of losing their hard-fought rights to own Hacienda Luisita,” Marbella said.

After Aquino’s mother Corazon Cojuangco-Aquino assumed the presidency in 1986, she vowed to implement land reform and enacted the CARP. Hacienda Luisita was placed under CARPand instead of land, stocks were given to the farmers. The stock distribution option (SDO) is one of the non-land transfer schemes approved under CARP. 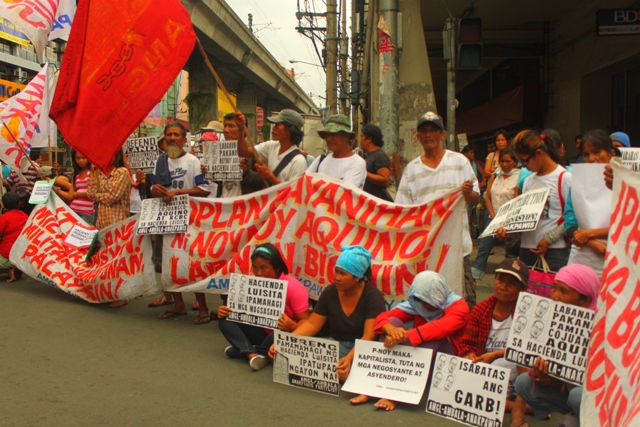 Farmers from Hacienda Luisita in a rally at Mendiola Bridge in Manila June 28 (Photo by Ronalyn V. Olea / bulatlat.com)

The groups expressed fears that Aquino would install a Chief Justice who “would reverse the SC decision and serve the interest of the Cojuangco-Aquino family.”

“There is no doubt that Aquino and his family has exerted much effort not to give up Hacienda Luisita. After the SC decision last April 24, Aquino has been successful to impeach Corona and is now occupied in appointing the new chief justice,” Mesa said.

The groups also slammed the alleged connivance of the Cojuangco-Aquinos and the Rizal Commercial Banking Corporation (RCBC) in driving away the farm workers from the 184-hectare land located at Balete village.

Members of Ambala have started cultivating the land in July 2011. The RCBC is claiming ownership of the said land after 184 hectares were turned over by the Hacienda Luisita Inc. (HLI) to RCBC as payment for a loan more than five years ago.

Security guards of the RCBC, aided by policemen and soldiers in plainclothes, repeatedly attempted to put up fences and demolish the temporary office set up by Ambala in the said area. In several instances, farm workers were arrested and wounded in defense of their land.

Criminal charges were also filed against leaders of Ambala.

Sibayan was one of those wounded when RCBC guards threw large stones at them.

“Initially, we were pleading to them to stop the fencing. We said the DAR has not issued its ruling yet on our petition but they went on and assaulted us,” Sibayan said, referring to their petition to revoke the conversion order issued by DAR several years ago on some 500-hectare land, including the 184-hectare being claimed by the RCBC.

Sibayan said soldiers are also roaming the villages inside the hacienda. “Sometimes, they would even pass by on board an APC [armored personnel vehicles].”

Mesa said soldiers on board two military trucks and a jeepney-type vehicle arrived at Asturias village last June 11. Until now, the soldiers conduct regular patrol and have imposed a curfew .

“The presence of military men and CAFGUs in every barangay has sowed fear among the farmworkers and their families,” Mesa said.

“While Aquino and his yellow gang are making false promises and deodorizing the bogus CARP, the President’s family-owned Hacienda Luisita stinks with political maneuvers and violence,” KMP’s Marbella said.

“The whole world knows what Aquino and his family have done in Hacienda Luisita. Only the ignorant and those interests hanging on him and the Comprehensive Agrarian Reform Program Extension with ‘Reforms’ would disgracefully consider him as a champion of land reform,” said Joseph Canlas, Amgl chairman, said.

Anakpawis Rep. Rafael Mariano said Aquino “will always be faithful to his class origin and interest. As long as he is in power, there can be no genuine land reform.”

“Two years after his inauguration, Aquino proved himself to be an epic failure. On June 30, 2010 in his inauguration speech, Aquino said, ‘The people who are behind us dared to dream. Today, the dream starts to become a reality.’ That dream became a nightmare for the people. The government failed to deliver significant reforms and the needed change clamored by the people,” Mariano said.

For Sibayan and the other farm workers of Hacienda Luisita, the fight is far from over. “We remain vigilant especially now that the Cojuangco-Aquinos use their money and influence against us.”