In a statement, CPA secretary-general Abie Anongos said the circumstances faced by ordinary citizens in Baguio are more than indicative of the truth that the economy is not improving.

A sidewalk vendor in Baguio City, Delia makes a living that barely provides for her six children’s daily needs. On an ordinary day, she earns P260 ($6.19), but she needs at least P941 so the entire family can live in relative comfort.

“For many Filipinos, finding resources to fill other needs beyond food and shelter remains a serious problem: the children’s education; family health and transportation needs. At a national scale, only from December 2011 to March 2012, poverty rate rose from 9.1 million to 11.1 million families. In NCR, minimum daily wage should be P1017 ($24) but it is still pegged at P446 ($10.60). Still, the daily wage goes as low as P113 ($2.69), which is the same as in 2003. And only between 2011 to 2012, the net wealth of the country’s 40 richest families even increased by 40 percent with now 15 Filipino billionaires from 11 in the same period. The net wealth of these richest families of $37 billion is already 25 percent of the country’s gross national income,” said Anongos.

The wife of farmer Julian is about to give birth, and needs medical attention. They live, however, in a remote barrio in Talifugo, Lacub, Abra, and it takes an entire day’s walk to get to the clinic in Poblacion. In the meantime, it will require another four to five hours’ travel to reach the hospital in the provincial capital of Bangued. A vehicle must first be secured for their travel. 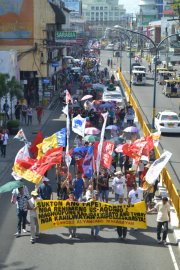 In Balbalan, Kalinga, a member of an indigenous tribe Pedro is carried on a stretcher by his kinsmen, rushing through and down mountain trails for hours to get him to the nearest hospital where he should get treatment for malaria. Medicines are scarce and expensive, and they will have to pay hundreds of pesos for his medical treatment.

In another remote barrio, in Buneg, Conner, Apayao, children trek at least three to four hours a day to reach the nearest school. Students from the first to fourth grades share a single classroom as only one teacher is assigned to the primary school.

“It’s shameful how the Aquino government has allotted P114.4 billion ($2.723 billion) for defense which is 6.3 percent of the total national budget. In contrast, state colleges and universities were only given a total of P30.3 billion ($721 million) for 2012. In the Cordillera, tuition fee increase in SUCs have reached a staggering 300 percent. The rest of the social services sector of education, health, social services, employment, among others, will have to divide the total allotted budget of P567.9 billion ($13.5 billion) such that every Filipino is only allotted P1.33 ($0.03) per day health budget. This isn’t even enough for a tablet of paracetamol. Meanwhile, P356 billion ($8.47 billion) was allotted for debt servicing,” Anongos pointed out.

Back in Mindanao, groups also decried Aquino’s failure to provide for the victims of natural calamities. They said that Aquino was a “fake environmentalist” and that his mining policies were also to blame for the deterioration of the Philippine environment.

Rhodora Bolusan, chairperson of the Collective Survivors of Sendong (CSS) – Carmen Chapter and Gabriela Northern Mindanao, said that victims were ignored and neglected by the government. “Most of the survivors of Typhoon Sendong in December 2011, for instance, were forced to return to their communities and received no help from the government,” she said.

Bulosan said out of the 10,000 housing units promised by the local government, only 1,000 were actually given. There are still many of us who need the government’s assistance and hope to be included in its livelihood programs,” she said.

Critics point out how the the lessons of the Sendong catastrophe have been lost on Aquino. In the last two years, he gave the go signal to 25 percent of all mining applications. In Caraga, 54 Mineral Production Sharing Agreement or MPSA have been allowed to operate, covering a total of 125,670 hectares. While in Davao Region, 26 percent of the total land area totaling 597,300 hectares are covered by mining applications. 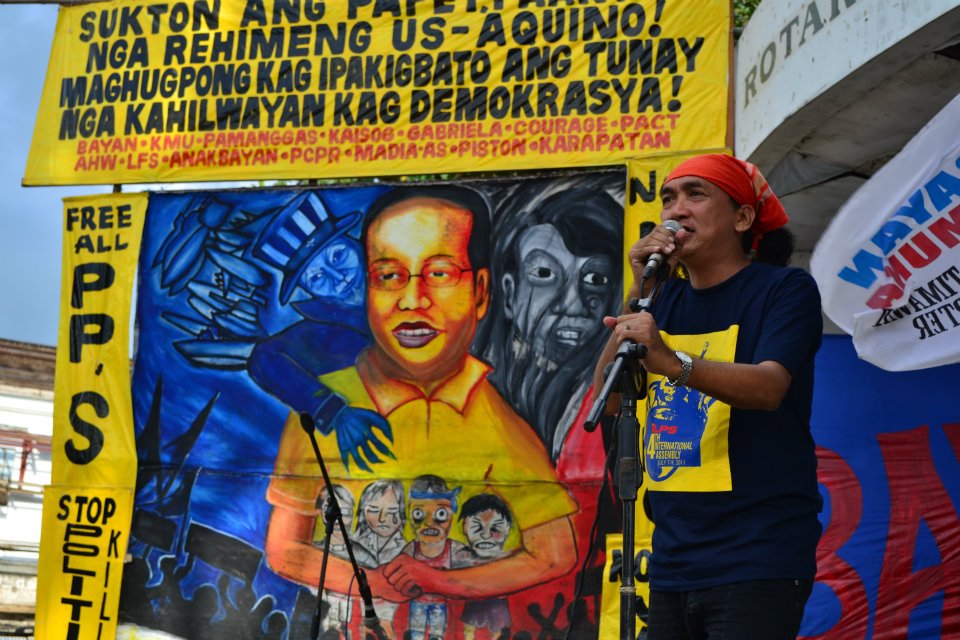 The CPA also decried how Aquino did not say anything about the state of human rights in the country. “Up to now Macapagal-Arroyo has not been held accountable for the extrajudicial killings the military perpetrated under Oplan Bantay Laya. Now, two years in his term, Aquino fully supports Oplan Bayanihan and there are already a shocking 95 cases of extrajudicial killings and 10 cases of enforced disappearances of activists, human rights advocates and environmentalists,” it said.

The group said the Cordillera region remains heavily militarized. “The presence of the military in the communities disrupts the lives of the residents and results in violation against to indigenous peoples’ collective, civil and political rights. Military operations projected to be in support of peace and development efforts are hiding the military’s true intent of imposing political repression and stopping the insurgency.Under Aquino, no military official responsible of human rights violations has been made accountable,” it said.

The regional chapter of Bayan in Panay also said Aquino’s human rights record is appalling. The group joined members of the Panay Alliance Karapatan in a two-day fast in support of the eight-day fast of political prisoners nationwide that started June 20. Last June 23, the groups also demanded general, unconditional and omnibus amnesty to all 363 political prisoners in the country, five of whom are currently detained at the Iloilo Provincial Integrated Jail in Brgy. Nanga, Pototan.

According to Bayan Panay secretary-general Lean Porquia, over 4,000 members of the group braved the heat and joined what was so far the biggest protest action against the Aquino administration in Iloilo.

“The protest action turned into festive mood when street dancing began as a new form to catch the public’s attention. The protest march spanned half a kilometer from end to end. Students from major universities walked out from their classes to join the protest, while workers and some government employees filed permits to leave their workplaces to join the protest,” Porquia said.