SONA 2012: A chronicle of lies foretold

Bayan said the people would not be duped by Aquino’s “flashy visuals and speeches because at the end of the day the basic issues of land, jobs, health, human rights and sovereignty are not addressed.”

If indeed the country is progressing and the people are reaping the benefits from it, why is the issue of human rights absent from Aquino’s third state of the nation address? This does not bode well for democracy and the human rights situation in the country, the Peoples’ SONA participants warned.

“While President Aquino praised the military and the police and efforts to improve the country’s defense and law enforcement capabilities, he did not utter one word during his 90 minute speech about the many victims of abuses by these forces. Human rights abusers can conclude that, contrary to previous government statements, they have little to fear and that it will be business as usual in the years ahead,” said Brad Adams, Asia director of Human Rights Watch in a statement sent to Bulatlat.com.

“Human Rights Watch has been calling on Aquino to communicate clearly to state security forces that his administration will hold accountable those who violate human rights. Members and officers of the military and the police have been implicated in large numbers of extrajudicial killings, torture and enforced disappearances. Since Aquino took office in 2010, not one perpetrator has been successfully prosecuted even as the abuses continue.”

Aquino’s real ‘achievements’ according to Peoples SONA: impunity and puppetry

For the Peoples’ SONA, even the increase in number of Conditional Cash Transfer beneficiaries “only underscores the worsening situation of the poor, as they more and more have to make use of the government’s dole-outs.”

“This highly counter-productive program is an admission on the part of the Aquino regime that it is unable to solve unemployment and poverty because it cannot provide land to the landless nor establish national industries to offer quality jobs to workers,” said Madlos, spokesman of National Democratic Front of the Philippines-Mindanao, in a statement. 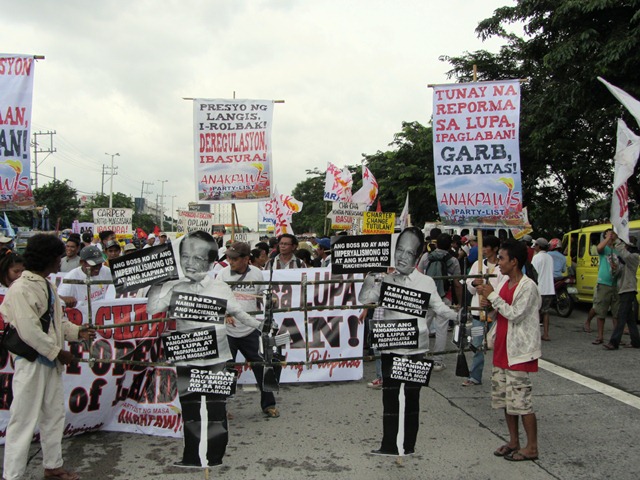 “The President should have checked with the DAR. The data of the DAR shows that it is highly unlikely that it can distribute the lands targeted for distribution within the term of Aquino given that the (CARPER) will expire in August 2014. The farmers should not have marched from different provinces if CARPER has distributed the land that they have been tiling for years” said Jobert Pahilga, lawyer and director of Sentro Para sa Tunay na Repormang Agraryo (SENTRA), a non-government institution that provides free legal service to Filipino farmers and farm workers and the counsel for the farm workers of Hacienda Luisita.

No PR spin by Malacañang can drown out the reality of severe landlessness, hunger, joblessness, said the human rights group Karapatan during the Peoples SONA. But to silence the protests that all these invariably engender, the Aquino government has another ‘achievement–’ “Aquino has heightened the terror and violence by state forces on organized communities, as shown in recent wave of killings and increased militarization,” said Karapatan during the Peoples SONA.

Added to this achievement is the likelihood, aired in the Peoples’ SONA, that Aquino may still top his record ‘achievement’ of 99 extra-judicially killed in just two years. Aquino reported in his SONA his government’s acquisition this year of more guns, helicopters (such as models for Uh-7H, combat utility, attack, naval), aircraft, cutter and frigate, force protection equipment, radio and other communication equipment, rifles, mortars, mobile diagnostic lab, bullet station assembly, housing for soldiers, and P28-billion ($666 billion) for modernization program of the Armed Forces of the Philippines, on top of the now operational US$30-million fund “given by the US for (Philippine) defense capability upgrade.

Another Aquino ‘achievement’ that the Peoples’ SONA warned he would lie about in his SONA is his supposed defense of the nation’s sovereignty in fighting for the Spratlys, Panatag Shoal and West Philippine Sea (or South China Sea). In truth, Aquino has surrendered national sovereignty over the disputed islands, the NDFP charged in an earlier statement, noting Aquino’s ordered withdrawal of Philippine vessels from the West Philippine Sea due supposedly to bad weather.

The weather has cleared up, but until now, redeploying vessels back to the shoal remains uncertain, prompting the revolutionary group to accuse Aquino of using the weather as an alibi to minimize hype for its retreat.

“Aquino’s order is an act of surrendering national sovereignty over the disputed islands. It bears the mark of cowardice. Unfolding before the people is a government completely inept in defending its national sovereignty and territorial integrity,” Madlos said the day before Aquino acted as if he was talking tough against China in his SONA.

Despite his warmongering against China supposedly in defense of Philippine sovereignty, Aquino has allowed U.S. naval ships and military aircraft access to the country’s naval and airport facilities. Bayan said that the Aquino regime has succeeded in allowing more US troops into the country as part of the rebalancing strategy of the US military. The group warned during the Peoples SONA that the Aquino government seems hell-bent on reversing the gains from the eviction of US military bases in 1991, by allowing the permanent presence of US troops in the guise of ‘helping the Philippines against China.’

As Aquino delivered his SONA in Congress, the Peoples’ SONA he barred from coming near the building warned that he “should realize soon that his gross deception will not last forever. The people are beginning to see clearly what his regime really stands for. The people will have to place their hopes for change in their own collective struggle.