“The labor department itself has maneuvered to deceive workers with a supposed wage hike whose determination the capitalists hold now even more firmly in their hands.” – PAMANTIK–KMU

MANILA – Before May 1 this year, there was talk in Congress that the decade-long proposal to legislate a P125 ($2.99) minimum wage hike is finally nearing plenary consideration. The House Committee on Labor announced last March their imminent submission for plenary debates of the P125 wage hike bill. After holding public consultations, they concluded that indeed, Filipino workers both need and deserve the raise, and capitalists can afford it.

But the Aquino government unveiled a new wage policy called two-tier wage system last May. Since then, we hear no more updates on wage hike legislation. Now, based on media reports, the battle lines for wage hike seem to be drawn between the labor sector decrying the P30 ($0.72) staggered wage hike granted in the National Capital Region as paltry – but one they will take anyway – and the employers who want it rescinded. 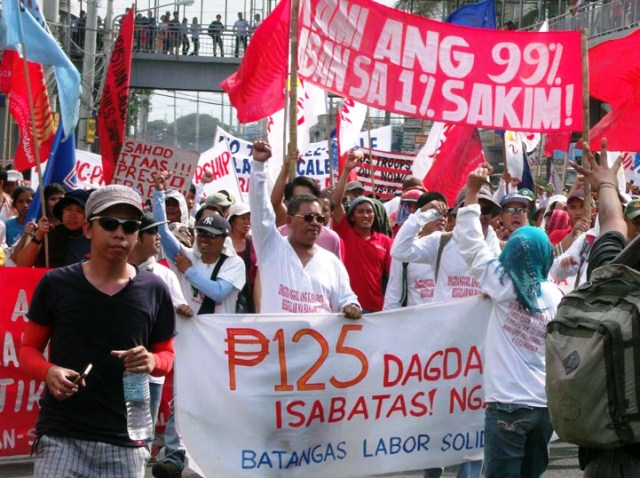 The real wages of Filipino workers have “flattened,” or did not increase in real value, over the past decade, said the independent think-tank Ibon Foundation. It said that the wage orders have failed to make up for lost purchasing power over the years, as prices increase without letup, led by price and rate hikes of products and services of deregulated strategic industries such as oil, utilities, healthcare, etc. Various labor groups cite this as reason for pressing for substantial wage hike via legislation. Another reason they often cite is the rising productivity and profits of companies in the Philippines.

But all these profit hikes proved inadequate still for the Employers’ Confederation of the Philippines (ECOP), who appealed the NCR wage order, calling the P30 ($0.72) Cost of Living Allowance (COLA) “confiscatory for employers,” “excessively unjustified,” and “not economically feasible.”

The ECOP appeal drew condemnations from diverse labor groups, from the government-backed Trade Union Congress of the Philippines to the progressive labor center Kilusang Mayo Uno (KMU), which described ECOP’s moves as the “highlight of its greed and irresponsibility.”

There is a reason why this NCR wage order granted a slightly higher COLA, said a labor think-tank.

The “P30 ($0.72) COLA is a cheap come-on” for the Aquino government’s new wage policy, the two-tier wage system,” said the Ecumenical Institute for Labor Education and Research (EILER) in a statement.

This year marks the first time the regional tripartite wage and productivity boards are explicitly tasked by the government to issue wage orders supposedly linked to productivity. Though Labor Secretary Baldoz is proud of the new wage system, labor rights advocates and the progressive labor center Kilusang Mayo Uno have warned the working people that it is another deceptive way of denying workers a living wage.

“It appears that the Aquino administration had hoped that the P30 COLA increase will make a productivity-based pay palatable to workers. But such measly increase in allowance can hardly hide the failure of the government to approve a legislated and significant wage increase,” said Anna Leah Escresa, executive director of the Ecumenical Institute for Labor Education and Research (EILER).

“We are monitoring its strengths and weaknesses,” Baldoz said, adding that so far (as of June), “more than 30 investors or foreign locators (in the area) have welcomed it.” She said other regional wage boards will come up with their two-tier wage scales.

The two-tier wage system, how it works…

The two-tier wage is to co-exist for the meantime with minimum wages, which are frozen at its current levels.

The regional wage boards set the amount of floor wage, based on the “poverty threshold” or the minimum amount a family needs to qualify as not poor. The second tier is determined by a productivity committee, to be formed per company, using company- or industry-wide productivity as basis.

Labor Sec. Rosalinda Baldoz told Bulatlat.com that “when the two-tier wage system is fully implemented, the minimum wage becomes floor wage or safety nets, to be paid to all workers without exemption.”

Based on its piloting in Southern Tagalog and based on interviews with officials of the labor department, the new wage system appears designed to further bring down Filipinos’ wages.

… How it cuts down the Filipino wages

Since last year, the Aquino government reduced the poverty threshold per Filipino per day from P52 to P46 ($1.24 to $1.10). They replaced the contents of the food bundle with the cheapest alternatives, so people who used to be “food poor” are now out of that category, even if their food intake has not improved. (Read also Latest poverty measure: excluding the poor from the poverty count

EILER predicted that the poverty threshold would be reduced further per region and per province. This is also the experience with regional minimum wages – the farther away you are from the capital, the lower your minimum wage becomes.

The basis of “floor wage” is more bare-boned, compared to the basis of the minimum wage, which factors in the cost of living. Minimum wages theoretically also factor in productivity and competitiveness, two things which KMU legal counsel Remigio Saladero had tagged as the bases often cited by employers to keep the minimum wages low. But in factoring them as bases for determining the mandatory minimum wages, Filipino workers are supposedly entitled not just to try to keep pace with the cost of living, but also, theoretically, to share in the profits.

In the two-tier wage system, this would no longer be the case.

The minimum wage is higher now than the floor wage, but, Baldoz said, “it will evolve over a certain period, say, five years.” After that, Baldoz said, “we can now say there is an effective floor wage.” (See 2nd part: Southern Tagalog workers get first taste of wage cuts via two-tier wage system)

The second tier or productivity-based part of the wage is “conditional.” It would have to pass through company-based deliberations. The workers have no guarantee that they would receive this. And if they receive this, there is no guarantee, too, if the amount is commensurate indeed to their productivity.

“Productivity has always been a variable which capitalists can tinker with through various means, such as through use of technology or volume of inputs,” EILER executive director Anna Leah Escresa said. The Philippines generally has a low level of productivity due to the backward level of technology and dependence on inputs from foreign countries.

After the Aquino government decided to make this part of wage “conditional” and variable, it also made it “more difficult and complicated” for workers to avail of it, as the leaders of Pamantik, the KMU in Southern Tagalog, told Bulatlat.com.

This part of Aquino’s new wage policy may work only if the government upholds its workers’ democratic rights, including their rights to form unions and engage in mass action. A strong union movement can dare companies to release their productivity report and sit down with the worker’ representatives to talk about pay hikes.

But conditions remain hostile to union organizing in the Philippines “due to 1) increasing preference of capitalists – and government approval – for contractual labor and 2) continued attack on existing unions and organizers,” as the Center for Trade Union and Human Rights said in their appraisal of the labor situation under Aquino. As a result, to date, only 1.78 million Filipino workers are unionized and only 229,000 are covered by collective bargaining agreements. This means that only 1 out of every 12 wage-and-salary workers is unionized, and only 1 out of 8 unionized workers are covered by a collective bargaining agreement.

How would workers assert their productivity-based pay in such an environment? This part or tier of wage could not realistically make it into many workers’ pockets, and the Aquino government knows that. Every year, its labor department pats itself on the back for having “succeeded” in forcing industrial peace.

The new wage system, said Pamantik-KMU, is “an obvious adherence of the Aquino government to the demands of the capitalists who do not want to give a single cent out of their pockets for their employees.”

Furthermore, the productivity–based second tier is meant to bleed workers dry with higher quotas, higher demands and more exploitative working conditions. Already, workers, especially in export-processing zones suffer from urinary tract infections because they could not go to the toilet when they need to as this would disrupt the production process.