In Calabarzon, workers get first taste of wage cuts via two-tier wage system

Calamba, LAGUNA – The two-tier wage system is being piloted since May this year in Region IV-A or Calabarzon (short for the provinces of Cavite, Laguna, Batangas, Rizal and Quezon). The region hosts nearly half of all approved or proclaimed export-oriented ecozones in the Philippines.

The new “floor wage,” or the first and the mandatory wage tier, is reportedly effective up to 2016. It will change only when the poverty threshold for the region changes. The second tier, or the productivity-based part, is a P12.50 ($0.30) “conditional temporary productivity allowance.”

So, where are the pay hikes? 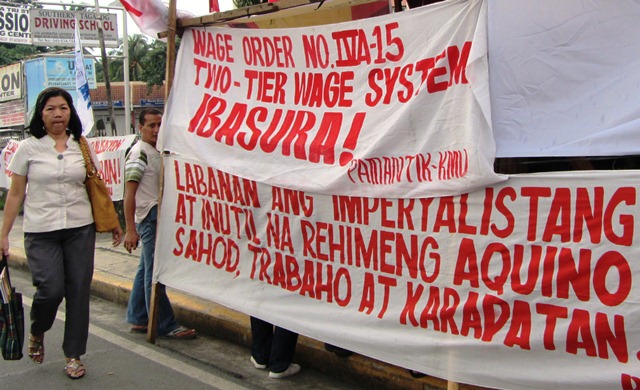 Meanwhile, the minimum wage earners in Calabarzon get no mandatory increase in the latest wage order, EILER said.

Calabarzon workers can avail of the P12.50 ($0.30) on top of their “floor wage” or minimum wage, but this is a “conditional temporary productivity allowance,” subject to the formation and decision of a productivity committee.

If the workers ever receive a conditional allowance, EILER said, it is excluded in computing the basic pay. It is, after all, just an “allowance,” like COLA.

Thus, the start of two-tier wage system in Calabarzon has brought the imposition of a lower “floor wage” than the current minimum wage. It freezes the current minimum wage rates, supposedly for five years. At the same time, it stipulated some increases but only to workers earning even lower than the newly prescribed “floor wage” of P255 ($6.10). The wording of the wage order is such that the floor wage of P255 ($6.10). seems to be the target wage rate to achieve.

Not only that, as the progressive labor center in Calabarzon revealed, the newly prescribed “floor wage” is even lower than the average wage being paid in violation of the minimum wage.

From low wage to lower wage

In an interview, leaders of PAMANTIK, the regional chapter of progressive labor center Kilusang Mayo Uno (KMU) in the area, disclosed that the prescribed minimum wages in the three areas of Calabarzon are hardly implemented correctly or on time. Usually, employers pay lower wages than the prescribed minimum.

Calabarzon workers demand regularization at the job in May Day rally. (Photo courtesy of Pamantik-KMU / bulatlat.com)

In the region’s 249 economic enclaves, some 70-percent of companies or “locators” do not follow the wage orders, Wenecito Urgel, secretary general of Pamantik, told Bulatlat.com.

Southern Tagalog has a “growth corridor area,” an “emerging growth area,” and a “resource-based area.” All three have different minimum wage rates.

At times, “Companies start paying the minimum wage only when the worker has already worked for one year, to appease and forestall his or her demand to be regular,” Urgel said. (Legally, a worker should be considered as regular on the job after working six months.) Transnational corporations do this, Urgel said, also to avoid being slapped with cases by their workers.

But regularizing workers is often avoided by companies in Southern Tagalog, Urgel said. He added that workers get to be called regular only in unionized workplaces, after unions fought for it. 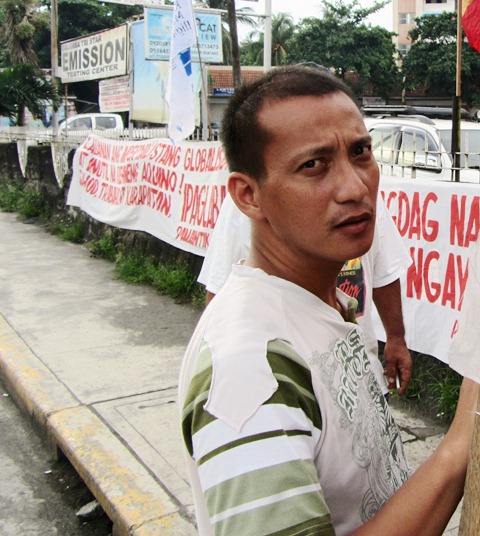 Fixed-term contracts lasting up to three years prevail in the region, said Urgel. Contract renewal is conditional on performance. But then, because companies shirk paying the separation or retirement pay, after a while, most workers no longer get a new contract, Urgel added. He cited as example an electronics firm in Cavite, where only 20-percent of the 2,000 workforce are regular workers, and the rest are “regular for three years only.”

Last year’s wage order of P15 ($0.36) has not yet reached many of the workers in Calabarzon. Urgel said that usually, “it takes six months to a year before workers receive the wage hike.”

But with the advent of the two-tier wage system, Hermie Marasigan, chairman of Pamantik, asked: what will happen to workers?

Pamantik said the advent of two-tier wage system has only further attacked the concept and practice of paying the minimum wages in the region, and made getting a raise even more complicated and difficult.

Since the first Aquino government enacted RA 6727 that regionalized wage-setting, labor advocates said, there had been no real minimum wages.

Felipe M. Medalla, a monetary board member of Bangko Sentral ng Pilipinas who formerly worked with the National Economic Development Authority, said in a forum on labor policies this week: “in more than 200 minimum wage rates in the Philippines, only one can be the real minimum. The rest are not.”

With a “floor wage” though that is lower than the current minimum wage, what now is the real minimum wage? Can repressed workers increase their floor wage through a productivity-based pay?

Three months since the wage system and new wage hikes are supposed to be in place, PAMANTIK said, companies have still to establish a productivity incentive committee. This committee is supposed to determine who would get a P12.50 ($0.30) “conditional temporary productivity allowance” as prescribed by Wage Order No. 15.

The experience with two-tier wage system in Southern Tagalog, so far, shows that the new wage system is beginning to slash workers’ wages. Pamantik reports that it has undercut the so-called minimum wages in the region, which they say are already insufficient to begin with.

Next, it has begun to freeze the current minimum wages until these or the floor wage “evolved” and became the same, as Baldoz told Bulatlat.com they would see in five years.

With the two-tier wage system, the government could all the more refuse to legislate an increase in wage hikes. It would even blame workers for their plight by using the false reasoning that workers have low wages because they are not productive enough.

On the other hand, whether the company forms this committee or not, there is no one to police it, said Urgel. So if a company is not unionized, the workers will find it extremely difficult to even start talking of productivity-based pay hike, he said.
Only three percent of Filipino workers have a union.

No more protection to workers

All in all, the Aquino government’s two-tier wage system is a bane to workers as it effectively lowers the minimum wage and exploits them all the more by making them work harder for a paltry sum called as productivity allowance. But it is a boon to companies as it would allow them to keep wages low while extracting more profits from their workers. 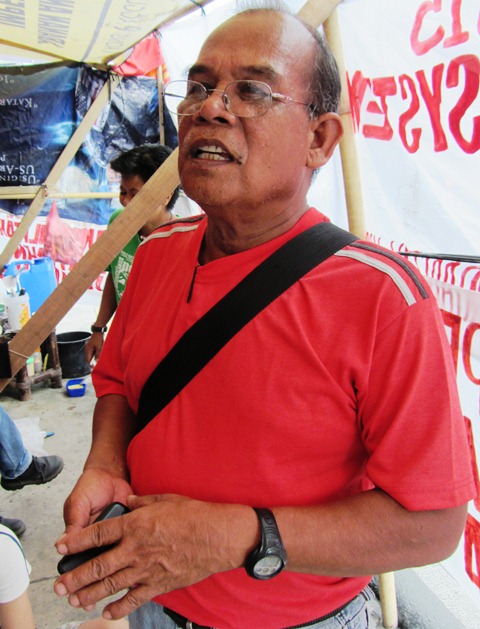 Hermie Marasigan, chairman of Pamantik, at a picket in Calamba, Laguna, Region 4-A. (Photo by Marya Salamat / bulatlat.com)

“What the Regional Wage Boards did was come up with a wage order that will not benefit workers, however which way you look at it,” said Hermie Marasigan, chairman of Pamantik.

The two-tier wage system also adds other avenues for capitalists to take advantage of workers, said Urgel. He explained that experience shows how capitalists use the issue of productivity as a “soft approach” to raising productivity – by getting the union cooperation, for example, in exchange for scant incentives.

Aquino’s two-tier wage system also removed the former coverage, and thus protection, of non-unionized workers under the old system of wage orders, said Urgel. Before, the paltry wage hikes granted by wage orders covered all minimum wage earners. Under the two-tier wage system, a productivity committee is first required before pay hikes can be tackled. In a snap, minimum wage earners are no longer automatically covered by the wage hikes set in the wage order.

This new wage system is highly deceptive, Marasigan warned all workers. He condemned it as “another leap taken by the government to keep all Filipinos’ wages low, and yet, pretend at the same time that they are giving workers a wage hike.”

In truth, there is no wage hike, he said. “The labor department itself has maneuvered to deceive workers with a supposed wage hike whose determination the capitalists hold now even more firmly in their hands.”

With Aquino’s new two-tier wage system, it is clear, said Marasigan, how the Aquino government itself has sabotaged the workers’ demand for substantial wage increase at a time when the working people are being pummeled left and right by price increases.