“We hope the soldiers would leave soon so we can go back to our place.”

MANILA – In a far-flung village in San Francisco, Quezon province, nine soldiers in uniform barged into the house of Linda (not her real name) at around five o’clock in the morning. The men, brandishing their high-powered rifles, asked the 51-year-old farmer where her husband was. When she said her husband was not home, the soldiers did not believe her and they threw invectives at her.

Her husband, Arthur, went out early to buy rice, coffee and other basic commodities. When he arrived home, five of the soldiers led him to the coconut trees a few meters away from their house. “The soldiers told me to surrender my 45 caliber gun to them. I told them I have no firearms,” Arthur told Bulatlat.com in an interview. “They said I was lying and then they beat me up.”

Linda said the remaining soldiers searched their house for firearms. They found none but the soldiers stayed for three hours.

The scene seemed like from the martial law years but it happened just recently.

“Since then, I have never been at ease,” Linda confessed. Arthur was let go only after the soldiers took photographs of him. The incident last June 5 forced Linda and Arthur to leave their home and their crops.

Tagging along their daughter and six grandchildren ranging from three months to three years old, they went to Pasig City and for one month, they lived in a barracks built for construction workers. Two of their sons are working there. They returned to their home and left again for fear of their safety. 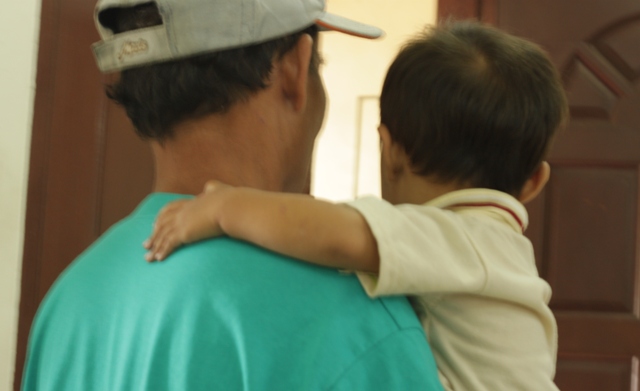 Carrying one of his six grandchildren, Arthur leaves the place to go to their temporary shelter.(Photo by Ronalyn V. Olea / bulatlat.com)

Linda’s family has joined five other peasant families who forcibly evacuated from their homes due to a man-made disaster called militarization. They are now under the custody of the Save Bondoc Peninsula Movement, a network of organizations and individuals demanding the pullout of military forces in South Quezon. The Armed Forces of the Philippines (AFP) has put up 50 camps and detachments, the largest military concentration since martial law years, according to human rights groups.

Orly Marcellana, spokesman of the Save Bondoc Peninsula Movement, said the military considers South Quezon as among the priority areas in the Aquino administration’s counterinsurgency program Oplan Bayanihan.

“Instead of going after the New People’s Army [NPA] however, the soldiers are harassing civilians, mostly farmers,” Marcellana said in a press conference in Quezon City, August 24.

This sentiment is shared by 53-year-old farmer Elsa (not her real name) from San Jose village, Macalelon, Quezon.

On August 2, Elsa’s son, Tony, 27, went out of the house to buy some goods from a nearby store. Tony was chanced upon by more than ten soldiers. The men were without nameplates in their fatigue uniforms and armed with high-powered rifles. They called out Tony and the young man obeyed.

“They asked me where the NPAs are. I told them I don’t know,” Tony told Bulatlat.com. Tony was then blindfolded, his hands were tied behind his back. 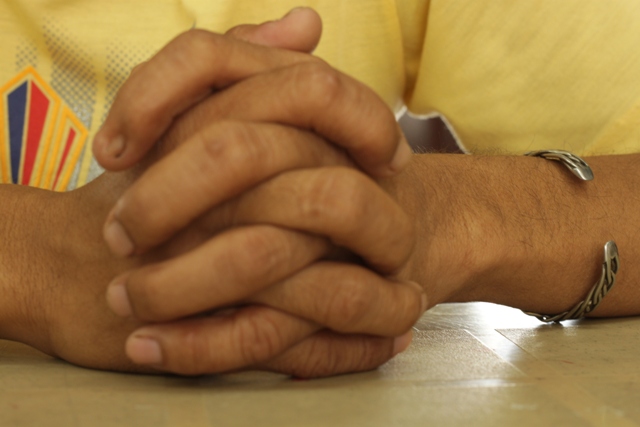 “They aimed a bolo at my neck. They took off my shirt and hit me with the butt of a rifle,” Tony related. For hours, the soldiers dragged Tony until they reached the next village.

His father, Edwin (not his real name), said they were relieved that a neighbor saw Tony and took the young man home. Tony was diagnosed with mental retardation.

“I could not believe that the soldiers did it to him. They would even cook inside our house and I would sometimes give them food,” Elsa said. “I thought my husband and my son were safe while they work on our farm; I was mistaken.”

Two days after the incident, the couple went to the local police to report the incident. They also talked to Macalelon Mayor Liwayway Tan to complain about the incident. Elsa said a certain Capt. Fulgencio and another soldier went to the police station on the same day and denied that their men did it.

Edwin said they are very certain about the identity of the perpetrators. He said that elements of the 85th Infantry Battalion have been roaming in their communities since March this year. “Our community was peaceful before they came,” he said.

Elsa said there were many instances where drunken soldiers beat up young men in their village.

The couple and their son Tony left for Manila on August 4. They left behind their two children at their house in the town center. Nobody tends to their two-and-a-half hectare of land planted with coffee, cotton, banana and coconut trees. Edwin said they have lost the opportunity to earn P10,000 ($238) from their copra.

Life as evacuees is difficult, Elsa said. She had a fever yesterday. They have been moving from one place to another, carrying only their clothes, sleeping mats and a few other personal belongings.

Linda feels the same. One of her grandchildren contracted a cough. The other just recovered from loose bowel movement.

The evacuees dream of returning home.

“We hope the soldiers would leave soon so we can go back to our place,” Elsa said.

The Save Bondoc Peninsula Movement already filed a complaint before the Commission on Human Rights (CHR) in May. No action has been done yet, Marcellana said.

Marcellana said they had a dialogue with Manila Auxiliary Bishop Broderick Pabillo of the Catholic Church’s National Secretariat for Social Action, Justice and Peace (Nassa). He said Bishop Pabillo agreed to facilitate a dialogue between the farmers and the military.

The group will also call for an investigation on the human rights violations in South Quezon.

“The soldiers must respect the rights of civilians at all times. They should stop violating human rights and international humanitarian law,” Marcellana said.