The MMDA has millions of deposits in various banks, composed of ‘savings’ it kept a secret, and which, by law, should have funded the employees’ benefits and incentives.

MANILA – A video of a traffic enforcer who was slapped and bullied by a cigarette company executive recently went viral on the internet. Many Filipinos expressed their outrage in social networking sites, forcing the company to suspend him and the perpetrator to issue a public apology.

But for 54-year old Nelson Azatea, an employee of the Metro Manila Development Authority (MMDA) for 25 years, what many Filipinos witnessed in the video was just a small part of the numerous problems they face. They have been receiving low wages and now their Collective Negotiation Agreement (CNA) incentive is being deprived from them.

“I am disappointed. I have been working here at MMDA for a very long time. But my life has not improved,” Azatea said, “I thought that landing a job here could help me bring my family out of poverty. Sadly, what I receive here at the MMDA is not enough.”

During his time, Azatea said, it was hard to land a job at the MMDA. They had to go through the proverbial eye of the needle to become a permanent employee. At times, he said, he would work as a street sweeper or in the main office. “I have endured it all,” he added. 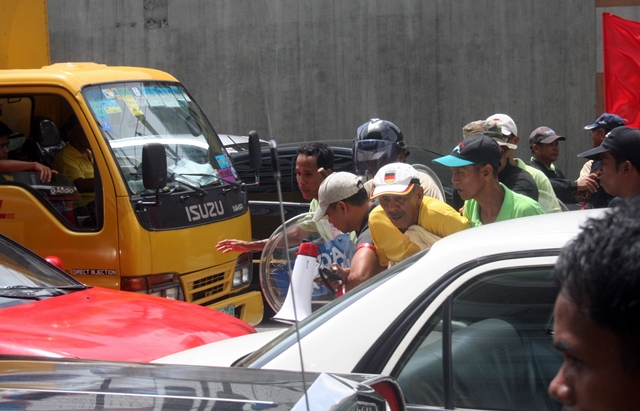 Protesting MMDA workers tried to block EDSA to register their call for the release of their CNA incentive. (Photo by Janess Ann J. Ellao / bulatlat.com)

But recently, Azatea and members and leaders of the Kapisanan para sa Kagalingan ng mga Kawani ng MMDA (KKK), the MMDA workers union, were able to get a copy of the MMDA’s financial report, which shows that the government agency has savings deposited in three banks and amounting to millions of pesos. Courage national president Ferdinand Gaite said the General Appropriations Act provides that savings of government agencies should be used primarily for the incentives and benefits of its employees.

“We have been negotiating with the MMDA for a long time. If we will not fight for it, they would not give it to us voluntarily,” Azatea said.

“We want to show our fellow Filipinos what is happening to us. We went to EDSA so we could expose what they are doing to us workers. But they do not want to allow us,” Azatea said during the protest action.

In 2011, the MMDA management and the workers union signed its Collective Negotiation Agreement, which stipulated that workers are entitled to a CNA incentive amounting to $595 each.

“This is one of the benefits that the workers are going to receive as part of our victory when the agreement was signed,” the union’s statement read.

“We waited patiently and went through the process of initial negotiations as we waited for the management to declare the agency’s savings, so that we could talk about our incentives and benefits,” the KKK’s statement read, “But the talks with the management just went in circles. They lied. They told us that the agency has no savings and has nowhere to get our benefits.” 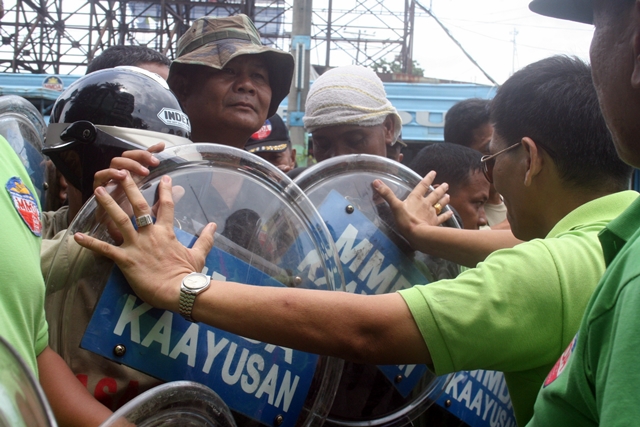 “They said that they have been depositing the money in these time deposit accounts for a long time now,” Gonzales said, citing MMDA officials they spoke with during the negotiations.

Gonzales added they were told that the savings in these bank accounts would be used to pay for the agency’s debts.

Gaite said government agencies would usually put their funds in time deposit accounts if it is not yet going to be used. But if it is already a part of the agency’s MOOE savings from the previous appropriation, the general rule is that priority should be given to employees’ benefits.

He cited the general provisions of the General Appropriations Act which states that in “the use of savings, priority shall be given to the augmentation of the amounts set aside for compensation, year-end bonus and cash gift, retirement, gratuity, terminal leave benefits, old-age pension of veterans and other personnel benefits authorized by law, and those expenditure items authorized in agency special provisions, in Section 16 and in other sections of the General Provisions of this Act.”


“It is not within the discretion of the agency and its management whether to give the CNA incentives or not, especially since it has savings deposited in banks. It is clearly stipulated in the law that the agency should give it,” Gaite said.

Gonzales said they have tried all possible means to get the MMDA administration to act on their demands for the release of their CNA incentive. She added that after all the negotiations that the union has conducted with the management, they were told that “it was not the proper venue to discuss their concerns.”

“We did not sign the board resolution that the administration came up with because it does not represent our demands,” Gonzales said.

The board resolution that Gonzales is referring to states that there must be a “’Letter of Request,’ duly signed and endorsed by Chairman Francis Tolentino, addressed to Sec. Butch Abad of the Department of Budget Management to request for the funding and release for CNA Incentives in accordance with Budget Circular No. 2006-1 series of February 1, 2006.”

During the negotiations, the workers were also told that the supposed savings would be used to pay for MMDA’s debts, specifically the tipping fees or the money that local governments are receiving to accommodate garbage from cities under MMDA.

The workers, in their separate opinion, said they do not agree with the MMDA’s decision to realign the savings, adding that it “could be the subject of next year’s budget.”

They reiterated their call to the MMDA administration to compute and give their CNA incentive based on the agency’s savings.

“The resource persons, except for their self-serving statements, offered no concrete proof of the source of said funds, the authority that approved such investments and the expenses it sought to pay in the future,” their separate opinion read, adding that the management has not yet shed light on the “true nature of the said time deposit (accounts).”

In the coming days, workers of MMDA vow to march to Mendiola, a stone’s throw away from Malacañang, if needed be so that the people would hear their concerns.