“Sometimes, you ask ‘Why should you still have talks with a regime that shows no political will? That violates human rights? On the other hand, the economic crisis is worsening and it shows the necessity of holding negotiations on socio-economic reforms to address the roots of the armed conflict.” – Luis Jalandoni, NDFP

The bilateral agreement was affirmed and reaffirmed in subsequent agreements between the two parties. Today, formal talks have been suspended since February last year .

At the Pilgrims for Peace forum, Jalandoni attributed the roadblocks to the resumption of formal talks to the non-compliance of the Government of the Philippines (GPH) to the Hague Joint Declaration, Joint Agreement on Safety and Immunity Guarantees (Jasig) and Comprehensive Agreement on Respect for Human Rights and International Humanitarian Law (CARHRIHL).

While the NDFP wants respect and compliance to all previously signed agreements, the GPH is insisting on a ceasefire.

In June, an informal meeting between the GPH and NDFP panels was facilitated by the Royal Norwegian Government officials in the Netherlands. Both parties raised their issues and concerns.

Jalandoni said that besides asking for the GPH’s compliance to the previous agreements, the NDFP is demanding for the release of 14 NDFP consultants and staff in accordance with CARHRIHL and Jasig. “Their arrest is illegal because under Jasig, they are immune from arrest, detention, surveillance and other forms of harassment,” Jalandoni said. 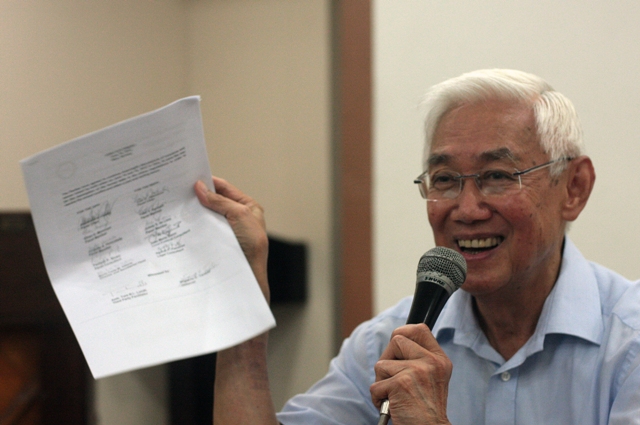 luis Jalandoni,chairman of the NDFP peace panel, discusses the updates on peace talks with the GPH in a forum organized by the Pilgrims for Peace(Photo by Raymund B.Villanueva/ bulatlat.com)

“The GPH thinks that Jasig is a favor to the NDFP. It is not. Actually, it is a reciprocal agreement that provides guarantees to both sides,” Jalandoni said.

The 1998 agreement binds both the government and the NDFP to guarantee the security of negotiators, consultants and personnel of the parties engaged in the peace talks, the CPP said. The Jasig prohibits subjecting peace personnel of both sides to surveillance, arrest, detention, filing of criminal charges and any persecution or punitive acts that would impair their effective participation in the peace talks.

The CARHRIHL, meanwhile, upholds the Hernandez political doctrine, which prohibits the criminalization of political offenses.

Jalandoni also said that putting a bounty over the heads of Jorge Madlos, NDFP spokesman in Mindanao and of Benito Tiamzon is also a violation of Jasig and CARHRIHL. The government increased the reward money for the arrest of the two rebel leaders to P5.5 million ($130.9 thousand). Jalandoni noted that the amount is higher than the bounty placed for the capture of retired Gen. Jovito Palparan Jr. who was tagged as the “Butcher” by human rights groups for the trail of blood he left in areas of his assignment.

The NDFP spokesman said that both Madlos and Tiamzon are involved in the peace talks and are thus covered by the Jasig.

Jalandoni said that when the Dutch police raided the NDFP office and several residences of NDFP personnel some years ago, diskettes containing codes for decryption were taken. He said all his documents on the peace talks were also taken. Jalandoni said the NDFP had proposed to reconstruct the list, to which GPH panel chairman Alex Padilla initially agreed. In its public pronouncements, however, the GPH said they would not release NDFP consultants who have not been verified to be Jasig-protected.

In the same meeting last June, the NDFP also called for independent investigations on the killing of NDFP consultant Sotero Llamas, enforced disappearance of Leo Velasco and Prudencio Calubid, among other cases of human rights violations.

The GPH panel turned down the invitation sent by the Pilgrims for Peace for the forum. Organizers said the GPH did not give any reason for rejecting their invitation.

Jalandoni said that GPH chairman Alex Padilla is demanding for a ceasefire. “He [Padilla] also wanted the stopping of NPA [New People’s Army] attacks and cited in particular the offensives against the Tag-anito Mining in Surigao.”

The NPA attacked three mining corporations in Surigao del Norte on October 3, 2011 as “punishment for the mining companies’ environmental destruction and violations of the rights of indigenous peoples.”

In a press release posted at the website of the Office of Presidential Adviser on the Peace Process, the GPH also raised the issue of the NPA’s use of landmines, saying it is a violation of the CARHRIHL.

The Communist Party of the Philippines (CPP) and the NPA insisted they only use command-detonated landmines, which are not prohibited under CARHRIHL and the Geneva Conventions.

As to the proposal for a ceasefire, the NDFP has maintained its policy that peace negotiations must not be reduced into mere ceasefire negotiations. The NDFP has shunned prolonged ceasefire “without concrete benefits to the people.” For the NDFP, the ‘doable types of ceasefire’ include holiday ceasefire during Christmas season on humanitarian grounds; ceasefire for the duration of formal meetings of the GRP and NDFP negotiating panels as goodwill and confidence-building measure and as incentive to substantive negotiations; and, ceasefire for the possible orderly and safe release of prisoners of war currently in the hands of NPA. The NDFP, however, offered a ceasefire if both parties reach an agreement on 10 substantive points that basically cover the agenda of the peace negotiations.

Jalandoni quoted Padilla as saying that if the NDFP wanted Alan Jazmines to be released, the NDFP should follow the GPH’s demands.

The Hague Joint Declaration states that no precondition that negates the inherent character of the peace talks may be imposed by either party.

Jalandoni said they remain hopeful that formal peace talks would resume soon despite the grim prospects.

“Sometimes, you ask ‘Why should you still have talks with a regime that shows no political will? That violates human rights? On the other hand, the economic crisis is worsening and it shows the necessity of holding negotiations on socio-economic reforms to address the roots of the armed conflict,” Jalandoni said.

After the signing of the CARHRIHL, the next substantive agenda item is socio-economic reforms.

“We will keep on trying,” Jalandoni said.