MANILA – Breastmilk is not only healthy for mothers and babies, it is the most convenient and practical way to feed babies, especially during calamities. This is the testimony of Ritchel Diaz, mother of four in a milk letting activity recently held at the Quezon City Memorial Circle last Friday, Aug. 31.

“It is very important to breastfeed our babies. This is true especially during calamities when we have to evacuate because of flooding. We never have to think about carrying feeding bottles, formula milk and distilled water. We can leave immediately because we know our baby will not go hungry.”

Around 60 mothers from urban poor communities, working mothers and public servants attended the group’s milk letting activity. The mothers simultaneously expressed breast milk that will be donated to the babies admitted at the Philippine General Hospital (PGH).

“We are overjoyed that these women, while they breastfeed their little ones are generous enough to share the gift of life to critically ill newborns admitted at the PGH Neo-natal Intensive Care Unit,” Madella Santiago, executive director of Arcsea, said.

The milk letting activity is in partnership with the Office of the Vice Mayor of Quezon City and the Samahan ng Maralitang Kababaihang Nagkakaisa (Samakana). Lactation experts and doctors supporting the breastfeeding campaign of Arcsea also joined the activity and assisted mothers in expressing breast milk. 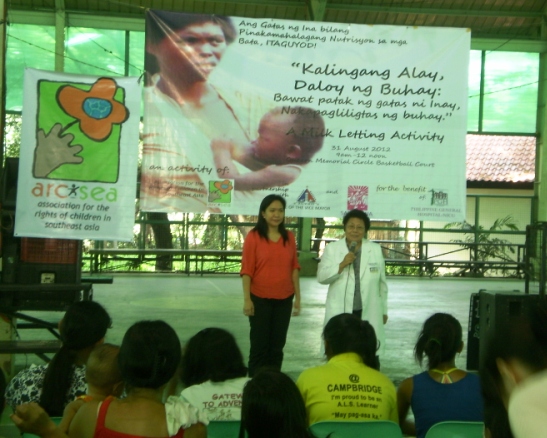 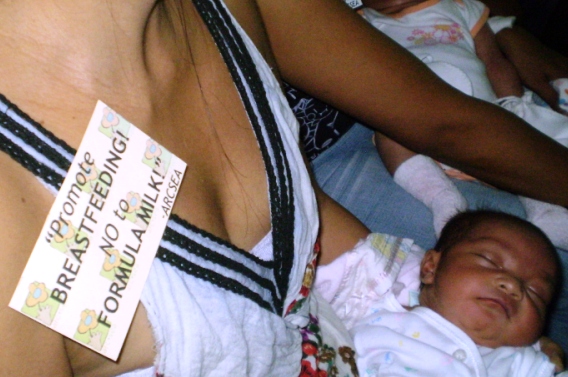 The event also aims to make a statement against the proposed amendments to the milk code, which advocates see as harmful to children. “For Arcsea, these amendments will serve the purpose of creating more profits for multinational milk companies while risking the lives and future of infants and young children,” Santiago said. A pending bill at the House of Representatives aims to amend the Milk Code.

Meanwhile, Dra. Pura Flor Isleta highlighted the importance of breastfeeding in times of disasters. “During the height of typhoons Ondoy and Sendong we donated breast milk to affected provinces. We were also able to donate breast milk to Cagayan De Oro City.” The prices of basic commodities shoot up after disasters strike and this also includes formula milk. Isleta pointed out that breastfeeding is most practical and has long-term benefits to the baby’s health.

Diaz also shared her experience during last month’s monsoon rains when many areas in Metro Manila including Quezon City wwere submerged in flood waters. “When we were in the evacuation center, I had no worries about where to get the money to buy milk for my baby or where to get distilled water because I breast feed her. It is so practical. Instead of spending almost P400 ($9.3) every week for formula milk, we can just add it to our budget for food instead.” 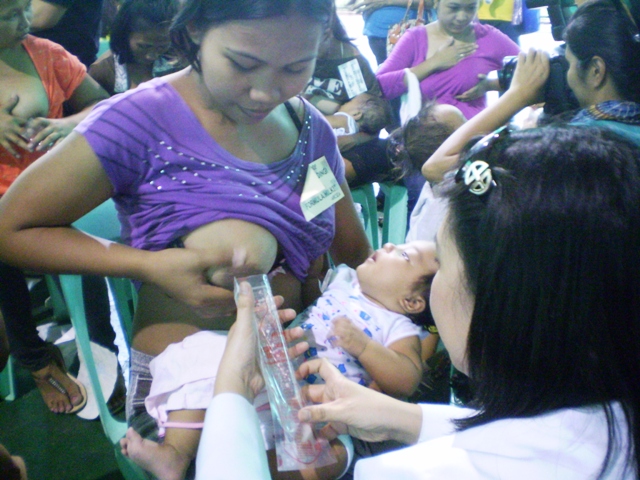 ‘Children’s right to survival and development’

Arcsea and mothers from the community is one with other advocates in opposing the amendments to the National Milk Code. Santiago said they stand firm that breastfeeding is a very essential source of milk for the survival and development of children in their early stages and therefore, a very important source of life for children.

“The promulgation of Executive Order 51 or the National Milk Code is a victory of breastfeeding advocates, organizations and individuals. It was a product of vigorous struggle in lobbying for the importance of educating and encouraging women to breastfeed despite the barrage of advertisements of commercial milk products of multinational food manufacturing companies,” Santiago said.

Isleta also called on mothers to be vigilant and fight for their hard-won victories as the amendments to the National Milk Code will also violate their right to breastfeed their babies. Isleta specifically mentioned the proposal of Cavite Rep. Lani Mercado and Ormoc Rep. Lucy Torres to declare as without pay the time spent by employed mothers to breastfeed their babies or pump breast milk. This means that working mothers who need around 40 minutes to either breastfeed their babies or pump breast milk would have to make up for it by extending their working hours for another 40 minutes so as not to have a reduction in pay.

“This is in contradiction to the Republic Act 10028 section 12, which allows compensated breaks for working mothers in recognition of their right to breastfeed or express their milk. Rescinding this right would excuse employers from compensating employed lactating women,” Santiago said.

Mia Chua, 35, a nursing mother added that “Working mothers always want to come home early to be with their children. But if the amendments are implemented, lactating mothers will not be able to express their milk for their babies because they have to extend their working hours,” Chua told Bulatlat.com.

She added that mothers will be left with no choice but to give formula milk to their babies, thereby making their babies less healthy. “The mothers would be often absent from work because they have to attend to their sick baby.” She also expressed concern about mothers who are only receiving the minimum wage; she said these mothers will be greatly affected when the amendments in the National Milk Code will be approved in the House of Representatives.

Santiago called on mothers, breastfeeding and child rights advocates to unite and be vigilant. “We should express our opposition to these amendments that endanger the lives of newborns and younger children. We should do everything in our capacity to educate and influence the public on the maneuvers and tactics of multinational milk companies and join activities that will prevent actions that undermine existing breastfeeding laws and policies. Together, we should uphold children’s rights to survival and development.”