Camp Bagong Diwa, one of the most restrictive jails in the country

MANILA – It was drizzling when the lawyers from the National Union of Peoples’ Lawyers (NUPL) arrived at Camp Bagong Diwa in Bicutan, Taguig City, Sept. 14.

The jail guards took their biometrics – photo, fingerprints and basic personal information. They were also subjected to body search before they could see the 18 male political prisoners detained there.

The lawyers who came from Manila, Bicol, Cagayan, Iloilo and as far as Mindanao met the political detainees in a narrow alley at the fourth floor of the detention center.

“We are fasting today to demand the release of all political prisoners,” Carlos Zarate, NUPL vice chairman for Mindanao, told the political detainees. “We are doing this in commemoration of our fifth founding anniversary and of the 40th anniversary of the declaration of martial law.”

Two of the 18 political detainees are consultants of the National Democratic Front of the Philippines (NDFP) for the peace talks – Alan Jazmines and Emeterio Antalan. Alexander Arias, chairman of the Pagkakaisa’t Ugnayan ng mga Magsasaka sa Laguna (Pumalag) is also detained there. The rest are farmers or organizers of farmers, mostly from Quezon and Rizal.

Speaking to the detainees, Emil Deleverio of the Union of People’s Lawyers in Mindanao (UPLM), said, “Do not worry. We are here. We will work for your release.” 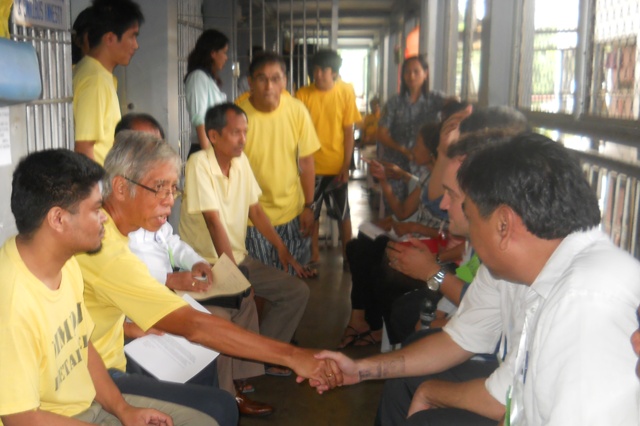 Madonna Gay Escio of NUPL Bicol said that before she came to Manila, she visited a political prisoner in a hospital in Albay. “His story is not different from yours,” she said.

“Although we know that it is a difficult struggle given the present judicial system, you must not lose hope,” Escio said.

Tips from a former political prisoner

Remigio Saladero Jr. , a labor lawyer who was detained on trumped-up charges during the Arroyo administration, shared some tips.

“First, you must deal well with the jail guards,” Saladero said.
“Second, find something to keep yourself busy with. Boredom is the number one enemy of political prisoners,” he said. “We will supply you with newspapers and other reading materials.”

“Third, exercise. But not now that you are fasting,” he said, smiling.
Political prisoners began fasting Sept. 14 until Sept. 21, the 40th anniversary of the imposition of martial law, to demand anew the release of 385 political prisoners.

“Our work does not stop even behind bars,” Saladero said. While he was in Mindoro jail, he took time to review the cases of other detainees.

For his part, Ephraim Cortez, whose client, Dumagat farmer Eddie Cruz, is also there, said: “We know that your situation is not easy. We want you to know that we are with you.”

Jazmines thanked the lawyers for their visit. “Your visit and your help inspire us,” he said.

“It is not only pro bono legal services that you are giving but your whole selves,” Jazmines said. “We know how difficult it is given that the country has the slowest, one of the most rotten judicial systems in the world.”

Jazmines said that notices for the hearings arrive late. There are many instances where the subpoenas for court hearing came a day after the scheduled hearing.

Antalan deemed the late arrival of notices as intentional, to further delay the progress of their cases.

The Special Intensive Care Area (Sica) of the Bureau of Jail Management and Penology is one of the most restrictive jails in the country, according to Jazmines.

The male political prisoners are assigned to five cells, with an average of four detainees in each cell.

Jazmines said the food ration is so bad.

Eddie Cruz, a Dumagat farmer, said they are usually served a vegetable dish. “We usually cook the vegetables again because it does not taste like food at all,” he complained.

Once a week, they are provided fish – a small piece for each prisoner.

The budget for every prisoner is supposedly P50 per day and P70 for the detainees under the jurisdiction of Metro Manila, Quezon City and Taguig. The real expenses, Jazmines said, stand at only P25 per prisoner. “The national headquarters of the BJMP controls the purchase of food,” he said. “They are able to pocket millions.”

Recently, the water pump at the Sica was broken and the water supply has been cut. Jazmines said the BJMP management said they have no money for repair and so they asked for contributions from detainees to raise P35,000 for the repair. The political prisoners refused to shell out money. “It is not right that the detainees are made to shoulder the expenses,” he said.

The women political prisoners, Jazmines said, are not allowed access to AM radio to listen to the news. They are not allowed to read newspapers and pen and paper are banned.

There are eight women political prisoners at another detention facility inside Camp Bagong Diwa.

In a typewritten statement, the political prisoners at Camp Bagong Diwa said they are observing an eight-day fasting until Sept. 21.

“Our protest reflects our continuing fight and hope for justice, vindication and freedom in the face of the seemingly application of martial law practices at the ground level – even if disguised, prettified or completely denied at the top and official levels,” they said.

“That there are political prisoners – more than 380 of us – is a fact, even if our existence is denied by Malacañang,” they added.

They said that most of them were unjustly, arbitrarily and illegally arrested, and swamped with trumped up charges.

They added that to this day, “many more victims of continuing vestiges of martial law abuses and atrocities include victims of extrajudicial killings, enforced disappearances, forced evacuations, hamletting, food blockades and the like.”

The lawyers left Sica before 3 p.m. to visit the women political detainees at the other detention facility. Later, they went to National Bilibid Prisons in Muntinlupa City.

With smile on their faces, the political prisoners shook their hands and waved them goodbye.