Urban poor groups from various communities that have been demolished or under threat of demolition gathered near the Supreme Court to protest the way they are being treated by the government and the violations of their rights.

MANILA – Urban poor groups and residents from various community marched to the Supreme Court on Sept. 25, a day after the violent demolition of homes in Guatemala, Makati City, to demand justice for the affected families and the scrapping of the Urban Development Housing Act.

“It was inhumane. We were treated like animals, or even worse. In a news interview, Mayor,” referring to Makati Mayor Jun Binay, “said he would file charges against the residents who fought the demolition. I now move from one home to another,” Lino Ojas, president of Guatemala Neighborhood Association, told Bulatlat.com.

“We fought for our lives for almost five hours but no government agency came to intervene. Politicians were all busy preparing and proclaiming their electoral slate when people were about to lose their homes. They do not care what would happen to us but they always try to court our votes every election period,” he said.

Ojas said they are now asking for justice before the Supreme Court, along with other residents of communities facing demolition. They demand the scrapping of Republic Act No. 7279 or the Urban Development and Housing Act, which, he said, has paved the way not just for the demolition of their homes but also in other urban poor communities in the country.

Guatemala residents stood their ground against the demolition team on Sept. 24. Their homes were demolished supposedly to pave the way for the construction of a new village community complex. After three unsuccessful attempts to get through the people’s barricade, the demolition team, including the police and members of Special Weapons and Tactics (SWAT), fired canisters of teargas to get through them.

Ojas said the violent demolition of their homes was an overkill. 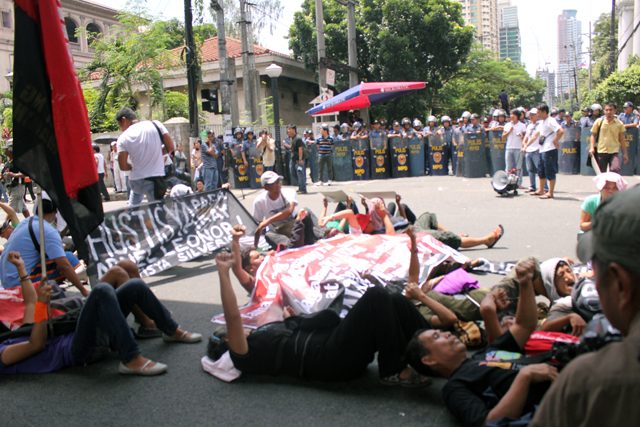 Urban poor groups and residents from various communities, however, were not allowed to go near the Supreme Court. The police blocked them at Taft Avenue corner Padre Faura street, which was just a stone’s throw away from the Supreme Court.

“We are disappointed that we are not allowed to go near the Supreme Court. We are here to inform them of what happened to us,” Ojas said, “Are they also in collusion with other branches of government? We demand that the new SC Chief Justice side with the poor.”

During the protest action, urban poor residents planked at the intersection of Taft Avenue and Padre Faura to show their defiance for being barred to hold a protest action in front of the Supreme Court.

Urban poor groups are asking the Supreme Court to look into the petition they filed last March 23 for the scrapping of UDHA, the country’s housing law, which progressive groups criticized for not serving the interests of the poor. They said the UDHA provided the justification for the demolition of urban poor communities by the government and other private entities for two decades now.

The groups particularly asked the Supreme Court to look into Section 28 (a) and (b) of UDHA, which stipulates that eviction and demolition shall be discouraged unless the “persons or entities occupy danger areas such as esteros, railroad tracks, garbage dumps, riverbanks, shorelines, waterways and other public places such as sidewalks, roads, parks and playgrounds” and if “government infrastructure projects with available funding are to be implemented.”

The petition asserted that these provisions have been used to eject “underprivileged and homeless citizens without any court order to that effect,” when the “Bill of Rights provides that no person shall be deprived of life, liberty or property without due process of law nor shall any person be denied equal protection of the law.”

While the people await the Supreme Court decision, Joy Lumawod, president of Kadamay – National Capital Region, said demolitions remain widespread in the country. For the past few days, two communities – in Consular Area in Taguig City and in Guatemala in Makati – were demolished. The Silverio Compound in Parañaque City has also been visited by people who plan to conduct soil testing for the reported construction of medium-rise buildings in the area. 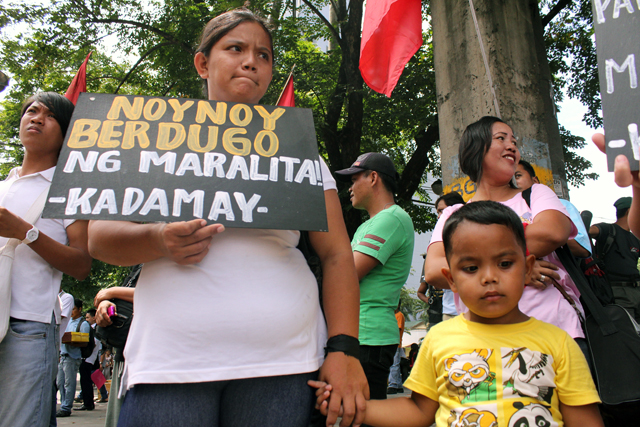 “This is a harsh reality that may Filipinos are facing. They are confronted with increasing prices of everything, including tuition fees, among others. Now, their livelihood and homes are being taken away from them,” Lumawod said.

Residents from other urban poor communities also arrived during the protest action, saying they know what Guatemala families are going through.

Mariano said he is urging Sereno to declare the provisions in question as unconstitutional, describing it as the “government’s blueprint for forced evictions and violent demolitions.”

“These violent demolitions must be stopped immediately,” Mariano said, “The UDHA effectively ‘legalized’ violent demolitions and eviction of informal settlers. This law violated significant aspects of the people’s right to adequate housing reflected in various international conventions and in the Philippine Constitution.”

“Informal settlers resist demolition and forced eviction because of prevailing profit-driven socialized housing projects promoted by the government. They also resist the absence of basic social and economic services and lack of employment opportunities in resettlement and relocation areas,” Mariano said.

Demolition and threats in other communities

“Both the president and the vice president seem to have no difference when it comes to treating the urban poor,” Estrelieta Bagasbas, a resident from North Triangle, Quezon City and president of the September 23 Movement, said, “They both want to sweep the poor away from their sight.”

“We are here before the Supreme Court to ask them to side with the poor. I do not believe that they were put in power just to displace us. We are not animals that you can just shoo away from our homes,” Bagasbas added.

Aside from residents of North Triangle, families affected by the planned demolition of homes in Parañaque City arrived during the protest action.

“There are still threats. For the past few days, the residents have managed to keep some people from conducting soil tests in our community. These tests are supposedly needed for the construction of the planned medium-rise condominiums in our area,” Sheila Bernal, a resident and president of Samahan ng Pagkakaisa at Rekonsilasyon sa Silverio, told Bulatlat.com.

Bernal said these tests would supposedly need only a couple of plastics of soil. But soon they found out that there are already heavy equipment deployed in two of their subvillages, namely Purok 3 and 5.

The mother of Arnel Leonor Glenda also arrived with the contingent from Silverio Compound. She said she was there also to pay a visit to the Department of Justice. “Until now the National Bureau of Investigation has yet to release the result of their investigation. There are no charges filed against those who killed him,” Glenda said, “This is the third time we went here.”

Arnel, who was only 19, was killed during the demolition of homes in Silverio Compound. In television news report, police could be seen aiming their guns at the protesting residents.

Another demolition of homes took place on Sept. 20 in the Consular Area of Fort Bonifacio village in Taguig City. Nikki Abilar of Kadamay –Taguig told Bulatlat.com the demolition took place even if no court order was presented to the affected residents, mostly consisting of active and retired military personnel. The families were offered relocation in Rodriguez, Rizal, which, like in other communities, they refused.

“Residents said the place where they are living now is not a danger zone. But to be transferred to a relocation site means moving to a deadly zone,” Abilar said.

The demolition team, which Abilar estimates to be consisted of around 1,400 members of police, demolition team and SWAT, managed to get through the residents’ barricades.

Abilar said there are reportedly plans to construct condominium units once the area is cleared of their homes.

“It is part of the government’s PPP (Public Private Partnership). It is going to be a partnership reportedly between construction company Megaworld and the government,” Abilar said, “This project will push through while ignoring the clamors of military personnel who served the country.”

“They should put a stop to all these demolitions,” Glenda, Arnel Leonor’s mother, said.

Criminalizing the residents’ struggles to protect their homes

Leah Valencia, secretary general of Kadamay – NCR, said aside from demolishing their homes, the government is also “criminalizing the efforts of residents to protect and barricade their homes.”

In Silverio Compound, 10 residents are still behind bars for protecting their homes from the demolition. In an earlier Bulatlat.com report, it was revealed that among those who were arrested were passersby.

“They are the ones who are calling for genuine housing services for the poor and they get this in return,” Valencia said.

If the demolition of homes would continue, Bagasbas believes that it is only right to oust President Aquino. “He is but a puppet. If he will not listen to us, he does not deserve to be in power. He must be ousted. Nothing has changed under these people who promised that they would serve the people.”