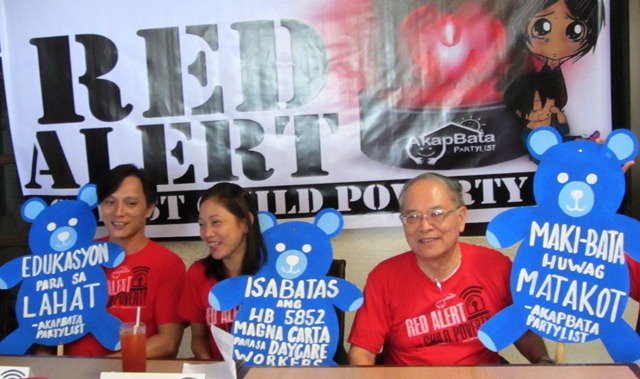 MANILA – Child welfare group Akap-Bata Party-list launched on Oct 1, as kick-off for the National Children’s Month, a campaign dubbed ‘Red Alert vs Child Poverty.’ In a media forum in Quezon City, Bishop Deogracias Iñiguez of the Diocese of Caloocan, Ronnie Quizon, son of the late comedian Dolphy, and top leaders of Akap-Bata Partylist sent a strong warning to the government to heed the “alarming trend” in child poverty. They also urged the general public to help resolve the basic issues of children. 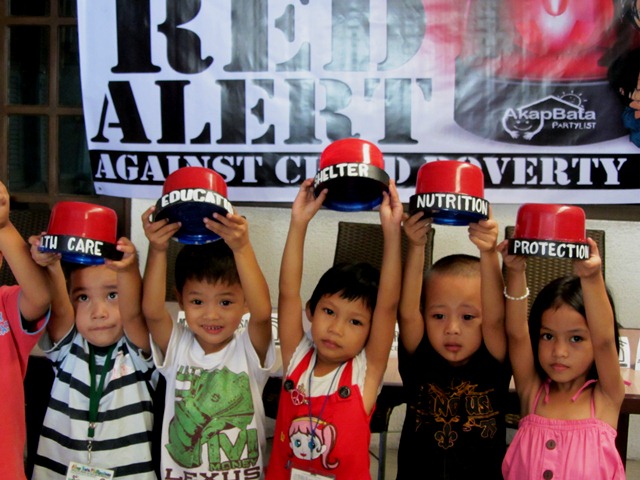 Some pre-school children joined in the campaign to raise the ‘red alert’ level vs poverty, as they raised their demand for shelter, proper nutrition, education, health care, protection and other basic needs which the Philippine government had previously acknowledged as children’s rights.

“Issues plaguing the Filipino children trace their roots to poverty and exploitation of poverty,” Iñiguez told Bulatlat.com in Filipino. But, under the present administration of President Benigno ‘Noynoy’ Aquino, child poverty in the country has been worsening, Akap-Bata noted in its 2012 report on the situation of Filipino children.

Latest data on Filipino children’s situation are disheartening based on the Akap-Bata report. As poverty worsens, so does the plight of the children, said Arlene Brosas, national secretary general of Akap-Bata. She also takes issue with the conflicting survey reports coming out supposedly saying there is less number of poor today, and yet the number of those who experience hunger has increased. Such statistics are illogical, Brosas said.

Akap-Bata warned that the number of uneducated, malnourished and homeless Filipino children is growing every day. Confounding that, it said in its report, are violations of the basic rights of our young citizens. The number of homeless children swells dramatically, it said, as demolitions of communities spread all over the country due to the Public-Private Partnership programs that are the “framework economic policy” of the Aquino administration.

Akap-Bata blamed the continuing implementation of demolitions as responsible for the rise in number of street children, which now total 2.2 million.

As a result of such pervasive hunger, nearly one in every three Filipino kids is stunted, and one in five is underweight, said Akap-Bata.

These alarming data increase further as our government and various local institutions continue to neglect and disregard the need to address the root causes of child poverty, the child welfare group said. 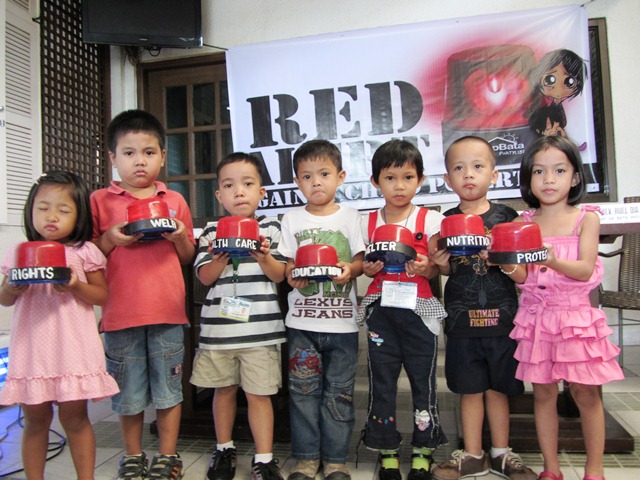 “We have to work for the welfare of the Filipino children, uplift their condition, in every venue we can, from Congress to (parliament of the) streets,” Brosas told Bulatlat.com. She said it is sad that until now, the number of children five years and below dying of preventable causes is still unchanged.

On top of all these, rights abuses aggravate poverty of children. Child labor in the Philippines now involves 5.5m children. Cases of child abuse and exploitation increase year after year, Akap-Bata warned. From 2008-2011 alone, it noted that “a record-high 41 cases of child soldier recruitment for paramilitary groups (as guides and shields for military operations) were reported.”